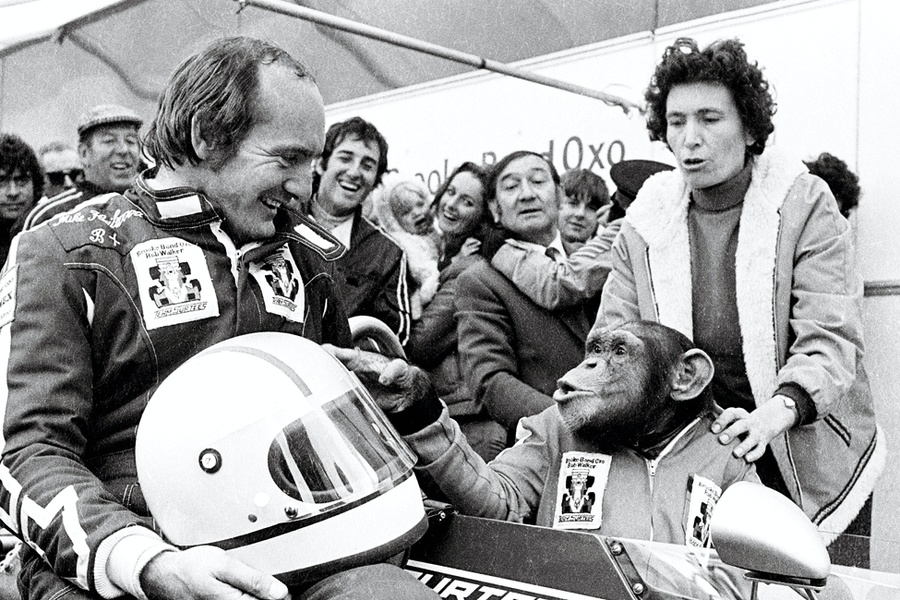 Born on 2nd April 1940, Mike Hailwood’s father had raced before World War Two and was a successful motorcycle dealer and Mike himself began riding a bike at the age of seven around the grounds of the family home. From these beginnings he would go on to take 76 Grand Prix victories, 112 Grand Prix podiums, 14 Isle of Man TT wins and nine World Championships, including 37 GP wins, 48 Grand Prix podiums, six Isle of Man TT wins and four World Championships in 500cc.

His racing debut came at Oulton Park in 1957, where he finished eleventh on a borrowed 125cc MV and from this he would go on to win 1958’s British Championship in the 125cc, 250cc and 350cc categories. In 1959, he was racing works 125 and 250cc Ducatis, never being beaten in British Championship races and also finished fourth in the 250cc World Championship, despite missing several races. At the age of 19 he became the youngest ever World Championship race winner after winning the 125cc Ulster Grand Prix at Dundrod. 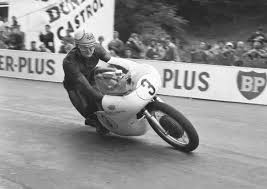 During preparations for the 1964 US Grand Prix, he set a new record on an MV 500cc, recording an average speed of 144.8 mph at Daytona and later went on to win the race. He entered selected UK events with the Tom Kirby Team in 1965 and won the Hutchinson 100 Production race at Silverstone on a BSA Lightning Clubman, where, with little regard for the rain he achieved laps of 83 mph to establish his winning lead.

He would later return to Honda and went on to take four more world titles in 1966 and 1967 in the 250 and 350cc categories. He is well remembered for his accomplishments at the Isle of Man TT races and by 1967 he had won 12 times there and in a dramatic 1967 Senior TT (against Giacomo Agostini) he set a lap record of 108.77 mph on a Honda RC181, which stood for the next eight years.

Honda pulled out of GP racing in 1968 but paid him not to ride for another team, intending to keep him as their rider when they returned to competition. He did continue to ride Hondas during 1968 and 1969 in race meetings without World Championship status, including European events in the Temporada Romagnola (Adriatic Season of street-circuits). He also raced in the post-TT race at Mallory Park in 1968 and the following year raced a Seeley in a Mallory Park Race of the Year.

In 1970, he raced for the BSA team, riding a Rocket 3 at the Daytona 200 but the bike failed due to overheating. He returned with the team for the following year’s race, qualifying on the front row, but his bike again broke down.

Alongside his bike racing, he had also competed in four-wheel racing and after driving an F1 Lotus at Silverstone in 1961, he moved into Formula Junior at the end of 1962, followed by a drive in 1963’s British GP in Reg Parnell's Lotus-Climax 24. When Parnell died he bought a share in the team and raced Lotus 25s (with BRM V8 engines) but the whole season was blighted by engine, transmission and chassis failures and during a race at Enna he spun into a lake.

There were three-years with Team Surtees and he was in contention for a victory at the 1971 Italian GP when he and three other drivers finished 1-2-3-4 over two-tenths of a second, Mike finishing fourth behind Peter Gethin, Ronnie Peterson and Francois Cevert. There were perhaps several missed victory opportunities; in 1972 he was leading the International Trophy until a faulty radiator cap let all the water boil away, he lost his airbox at Monza in 1972 (losing him a few hundred revs on the straight) and finished second, and lost 1973’s Race of Champions when the suspension broke. 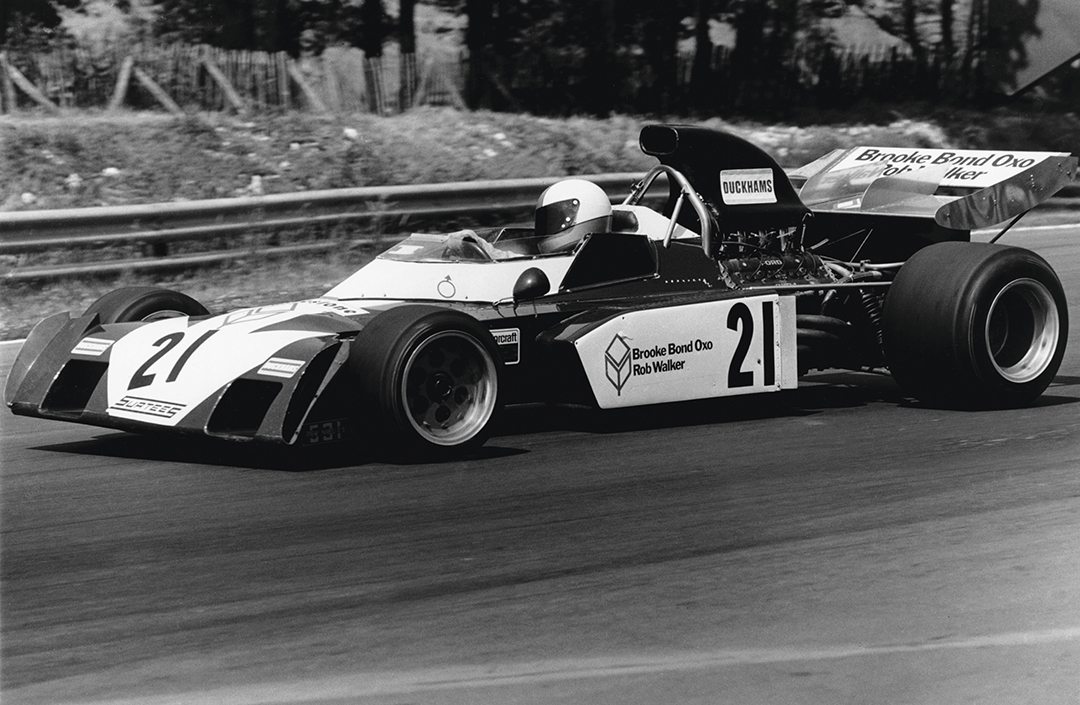 He won the 1972 F2 European title in a Surtees TS10, with victories at Mantorp Park and Salzburg plus second place finishes at Crystal Palace, Rouen and Hockenheim.

At 1973’s South African GP, after hitting Dave Charlton’s Lotus, Clay Regazzoni’s BRM hit his Surtees and the two cars burst into flames, with Clay trapped. Mike got out of his car and entered the flames to help him but caught fire and had to put his flames out by rolling on the grass. Marshals managed to put out the fire but it ignited again and Mike went back into the burning cars and helped pull him out of his car. His wife Pauline was in the pits but he said nothing about the incident and it was only when she read about it in the papers the next day that she discovered what he had done. He was later awarded the George Medal for his bravery.

During the year he raced a Mirage to victory at the Spa 1000kms (with Derek Bell) while in the following year they finished second at Spa and had fourth place finishes at Monza, Le Mans and the Osterreichring.

After leaving Surtees, he raced for McLaren in 1974, with his best results being third in South Africa, fourth in Argentina and Zandvoort, fifth in Brazil plus fourth in a non championship Race of Champions. However, a crash in his Yardley McLaren at the German Grand Prix at the Nurburgring shattered his ankle so badly that he could never race a car again.

After leaving Formula One, he spent some time in New Zealand where he ran a boat business but returned to England and in 1978, after 10 years away from racing he returned to the Isle of Man TT. Competing in the FI race, few believed he would be competitive after a long absence. but, riding a Sports Motorcycle Ducati 900SS he took a hugely popular win.

He raced there again the following year but following this he retired permanently and in 1979 he set up a motorcycle dealership in Birmingham. 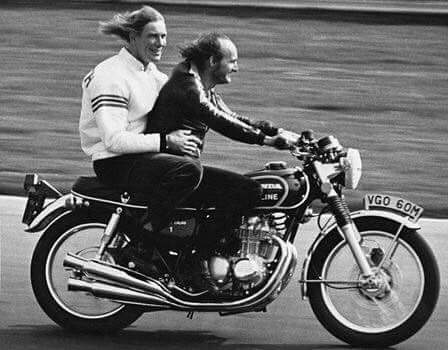 Tragically, on 21 March 1981, he and his two children went to the local fish and chip shop to collect a supper but their car collided with a lorry which made an illegal U-turn in front of them. His daughter Michelle was killed instantly, Mike sustained terrible injuries and young David received relatively minor injuries but Mike died two days later

Pall bearers at his funeral included James Hunt, John Surtees and Giacomo Agostini and poignantly, he lies alongside his daughter, Michelle, in the churchyard of St Mary Magdalene, where his headstone reads "Too good in life to be forgotten in death." F1 commentator Murray Walker regarded him as the "greatest motorcycle rider who ever lived. Motorsport had lost a friend and one of the greatest people who has ever lived in it.”

He was awarded the Segrave Trophy for 1979 in recognition of his Isle of Man exploits in the Senior and Classic TTs. In 1981 part of the TT course was named Hailwood's Height in his honour and in 1984 Pauline Hailwood opened the Mike Hailwood Centre, a multi-purpose building located at the TT Grandstand in Douglas. The FIM named him a Grand Prix Legend in 2000, and was inducted into the AMA Motorcycle Hall of Fame in 2000 and the International Motorsports Hall of Fame in 2001.

Mike was a larger than life character, who enjoyed life, and there are numerous stories and anecdotes about him. Peter Gethin told of an incident with him, ”We were in South Africa in his Iso Grifo driving from Bulawayo to Cape Town. We were absolutely steaming along in the lso, well over 100mph.

“In the distance I saw an ox begin to wander towards the road. Mike didn't see it. Anyway, we hit this bloody animal with a colossal impact. I had ducked under the dashboard but Mike was knocked out by the windscreen. There was ox everywhere, including, to my horror, a horn embedded in the back of my seat. The car went up in flames. We ended up in some dreadful out of the way hospital.”

On This Day Mike Hailwood

On This Day - Champion, Winner and Personality...Graham Hill