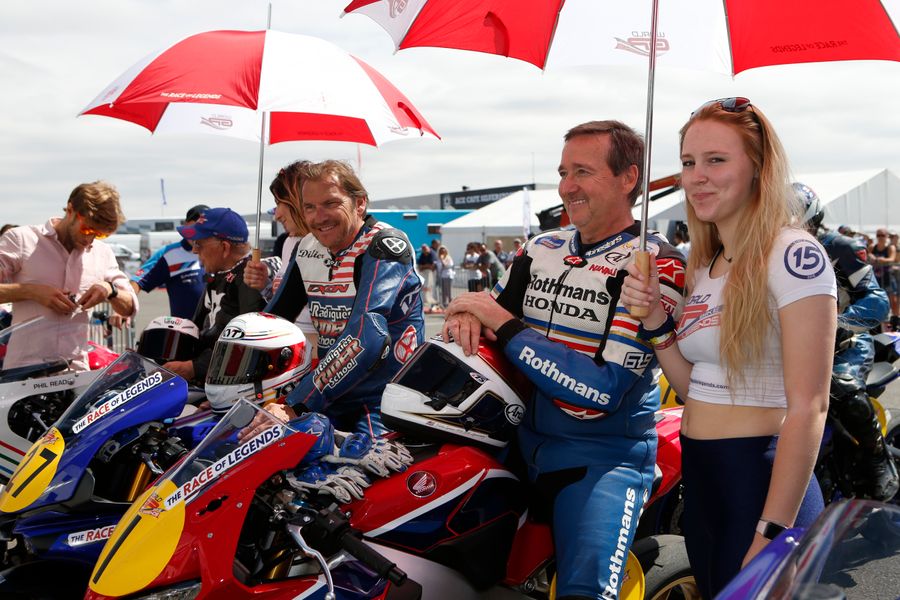 The World GP Bike Legends will be back out in force at this summer’s Silverstone Classic (26th-28th July), fronting an enlarged motorcycle showcase at the world’s biggest classic motor racing festival.

Featuring multiple world champions such as Wayne Gardner (AUS), Freddie Spencer (USA) and Raymond Roche (FRA), the presence of World GP Bike Legends has become a draw at recent Classics and their welcome return for the fourth successive year is set to be another massive crowd-pleaser. Even more so as World GP Bike Legends will be helping to power an awesome new bike zone, MotoWorld, putting a spotlight on the world of motorbikes with a commitment to the development of bike content through this new joint initiative with the organisers of the Classic.

Visitors will once again be treated to the stunning spectacle of some of the most beautiful looking – and sounding – racing bikes blasting around the full Grand Circuit ridden by some of the sport’s top names from past epochs. What’s more, fans will be able to meet their heroes with autograph and photo sessions between the dramatic track demos.

“There’ll be the traditional warm biker welcome,” promised Gardner, whose improbable life story from a five dollar dirt bike to the 1987 500cc World Championship title has recently been made into a critically-acclaimed movie. “We always love to impress, inspire and entertain at great venues such as Silverstone – so it is wonderful to be back on the incredible Classic bill for a fourth year in a row.”

Furthering the Classic’s appeal to motorcycle fans, World GP Bike Legends will be based alongside a number of other notable two-wheeled attractions within the event’s all-new MotoWorld.

“By popular demand we’ve seen the motorcycle element increasing year-by-year at the Classic – as a result we are now giving it a proper home within our ever-growing display areas,” explained Nick Wigley, Silverstone Classic CEO.

“The idea is for Ride Live to provide enthusiasts with a fabulous chance to experience some of their dream machines while the return of World GP Bike Legends will be a massively popular attraction. Many of these riders represent a golden era for the sport when the bikes were brutal and the ‘legends’ really were true heroes.”

Whether fans of two or four wheels, all those attending this summer’s Classic are guaranteed three days of unrivalled retro racing spectacle enhanced by fun-fuelled family entertainment.

This year’s action-packed 21-race track programme features special anniversary races for Bentleys, Capris and Minis plus evocative showdowns for classic era Formula 1, Formula 2 and Formula 3 single-seaters all together on the same race-card for the very first time.

As well as including unlimited access to both race paddocks plus trackside grandstands, tickets also provide admission to the majority of the funfair rides, infield attractions, interactive activities and amusements for all ages. Also included are the evocatively vibrant live music concerts on both Friday and Saturday evenings, this year honouring the 50thanniversary of the seminal Woodstock festival in 1969.