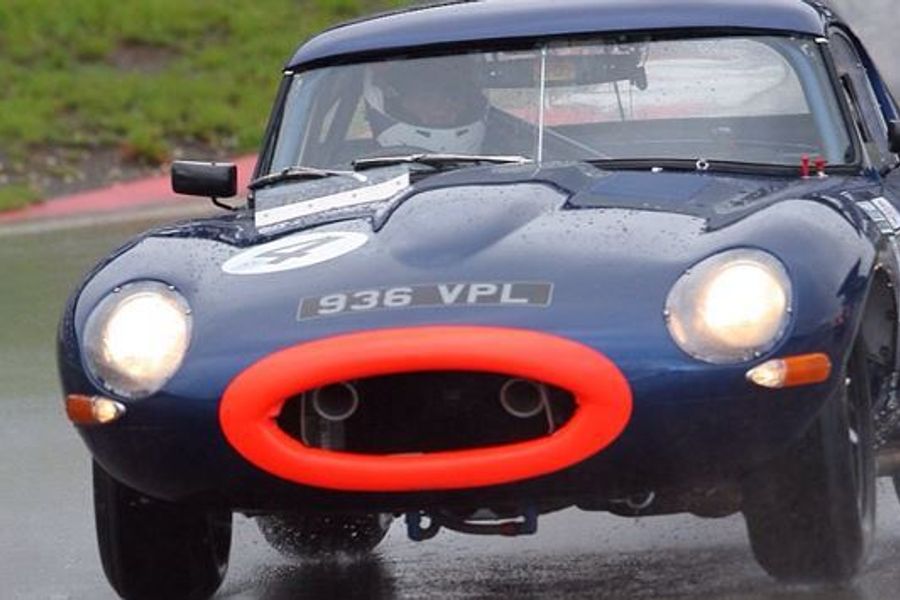 Martin O’Connell took a tremendous solo victory in today’s Gentlemen Drivers Pre-66 GT race after a fierce fight with Sean McInerney’s TVR Griffith. McInerney started on pole for the 65-minute race, and nipped into the lead at the first corner, but O’Connell was instantly on the attack and usurped the TVR by the end of the opening tour. Michael Gans ran with them but he was adjudged to have jumped the start and so fell down the order after his penalty. He also suffered damage in his fight-back and ultimately parked the Cobra. That allowed Marcus von Oeyenhausen (Jaguar E-type) up to third behind the two Brits and when James Hagan (Ginetta G4R) spun at turn one, the safety car was deployed to assist him out of the way. The pit window opened as the safety car was on track and McInerney took the opportunity to change a tyre on the TVR. That done, it was reluctant to fire up and hence he lost time and was overtaken by von Oeyenhausen. The second stint was headed by O’ Connell with von Oeyenhausen doing his best to close. His quest was dashed, however, when his E-type suffered an engine problem and he was forced to retire. That gave McInerney his second place again but he was 10 seconds behind O’Connell. He started to chase… “It was all about managing the brakes,” said O’Connell. “You had to balance how hard to push with keeping some braking left. It was tough.” McInerney pushed too hard and made a small error at the first corner. He went through the gravel and rejoined 27 seconds adrift of the leader. There was nothing he could do from there and he was forced to settle for second place. Third fell to Andrew Haddon who, after a fierce early fight with Gans, had a lonely run to third ahead of Thomas Bailly (AC Cobra) who had served a drive-thru’ penalty for a yellow flag infringement. He fended off the Chevrolet Corvette of Jose Beltramelli and Palle Birkelund Pedarsen who had a great run to a class-winning sixth. O’Connell’s win was his second of the day at the Oldtimer GP and one that he had to work hard for. “I didn’t realise that you could get two cars side by side through the chicane here without touching,” he said reflecting on his early battle with McInerney. “Those first 25 minutes racing against Sean were brilliant. Hard, clean racing: great fun!” Gentlemen Drivers Pre-66 GT cars will next be in action at Zandvoort on August 29-31.