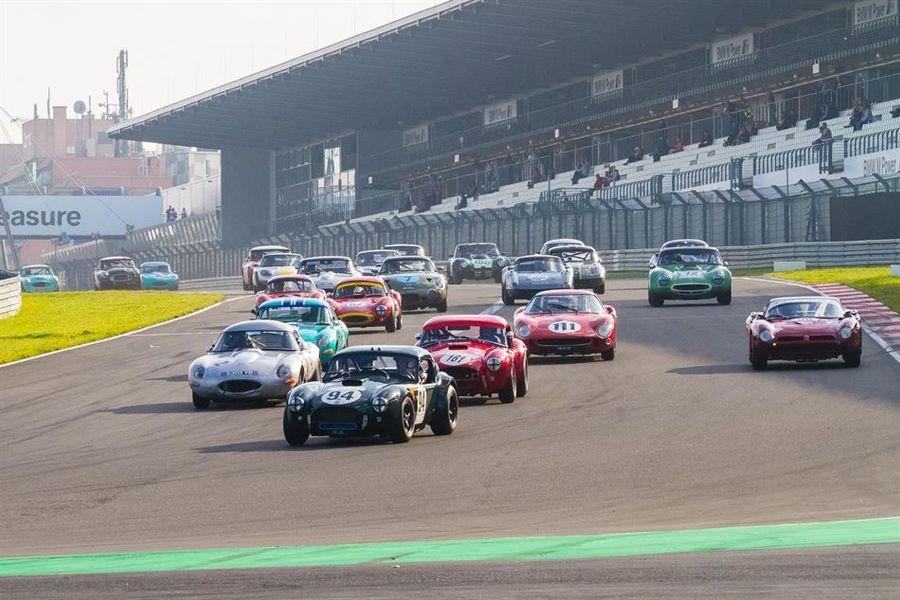 Michael Gans and Andy Wolfe led all the way for a commanding win in the Stena Line Gentlemen Drivers race at the Nürburgring. From pole position, their AC Cobra was never headed as Gans handed a comfortable lead to Wolfe, who controlled the gap to second-placed Julian Thomas (Jaguar E-type) until the end. Nicky Pastorelli took third overall and the C2 class win in the Dutch Ferrari 250 GTO, with Andrew Haddon (AC Cobra) in fourth. Ron Maydon took fifth and was a surprised winner in the CLP class, having lost time with a spin as well as receiving a stop-and-go penalty for a pit lane infringement. He was handed the class win when Palle Birkelund Pedersen’s similar Ginetta G4R lost a wheel on the final lap. Mark Ashworth (TVR Grantura) took C1 class honours. As Gans led away from the start and soon established a cushion on his pursuers, a tense battle for second place ensued, with Thomas having to fend off Haddon’s Cobra. On lap six, Haddon took the place but three laps later Thomas was back in P2. During the first half of the race, they were followed at close distance by the Jaguar E-type of Markus Graf von Oeynhausen, the German count at one time overtaking Haddon for third, but the distinctive blue E-type dropped back when Von Oeynhausen got the black-and-orange flag for a loose exhaust. Haddon lost time at the pit stops, allowing Pastorelli to move up into third place. In the opening laps, the Dutchman fell behind the Maydon and Birkelund Pedersen Ginettas, but by lap eight he had passed both of them and after the stops maintained his advantage on Haddon, who charged back up to finish fourth. Out in front, Andy Wolfe having taken over from Gans, their win looked a certainty for the remaining 35 minutes of the race. Wolfe controlled a gap to Thomas of about 25 seconds before easing the pace and crossing the line with 18 seconds in hand. “Michael did all the work, really”, said Wolfe, smiling from ear to ear. “He gave me a fantastic car and a good lead. I just kept a steady pace and made sure the lead stayed the same.” 47 seconds down on Gans/Wolfe, Pastorelli was an easy C2 class winner, well ahead of the Keith Ahlers/Billy Bellinger Morgan SLR and the Nils-Frederik Nyblaeus/Jeremy Welch Austin Healey 3000, who enjoyed their own private battle. The Healey had been leading with Welch at the wheel, but when Bellinger took over, he passed Nyblaeus on lap 21 to take second place in class. “We were aiming for the overall podium”, said C2 class winner Pastorelli on his third place overall. “We knew the car was capable of it, and we are happy to have achieved it. I took it easy at the start, as I didn’t want to eat up the tyres but I soon got into a rhythm.” Ron Maydon took an unlikely win in the CLP class, having spun off on his own on lap 5 and then further compromising his race by a stationary period in the pitlane that was deemed too short. He duly received a stop-and-go penalty, which momentarily dropped him down behind the Graham Wilson/Nigel Greensall Lotus 26R, while Palle Birkelund Pedersen looked certain for the class win, circulating in fifth overall. As Maydon clawed his way back past the Lotus, he was handed victory when the Dane’s Ginetta shed a wheel on the final lap. “It was good fun!” said Maydon. “Bad luck to Palle for breaking down: the class win was his.” Mark Ashworth came out on top in his C1 class battle with Armin Zumtobel. The TVR Grantura and Porsche 911 were always close, often separated by mere seconds, but Ashworth never looked back after he passed the class-pole-sitting Austrian in the opening stages of the race. The Georg Nolte/Frank Stippler Bizzarrini 5300 GT that had started from second on the grid quickly fell down the order with its owner Nolte at the wheel. However, as soon as Stippler took over, the Bizza was the fastest car in the field, the German charging from 16th to sixth at the finish. With two laps to go, Jamie Boot (TVR Griffith) overtook the Joaquin Folch/Jeremy Welch E-type to take seventh overall, while Simon Hadfield brought the Aston Martin DP214 back up from 14th to ninth after having taken over from Wolfgang Friedrichs. The Wilson/Greensall Lotus 26R was 10th overall.