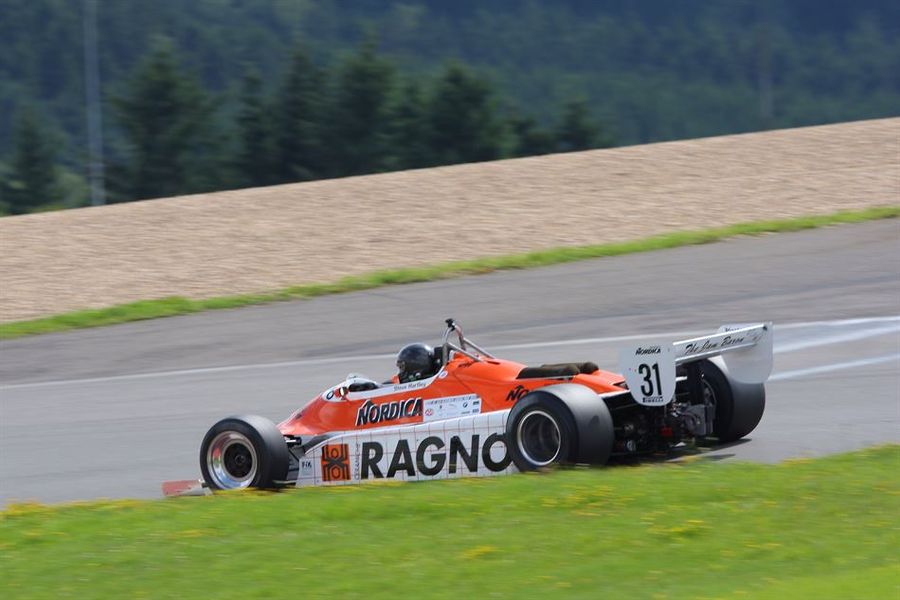 Steve Hartley continued his superb season in the FIA Masters Historic Formula One Championship by scoring his eighth victory of the season at the annual Nurburgring Oldtimer GP, today, Saturday. Starting from pole, Hartley (Arrows A4) lost the lead at the opening corner to Simon Fish (Ensign N180) who was chased by Michael Lyons (Hesketh 308E), with Hartley third. As the fight raged up front, Hartley made a mistake fell away a little. “I thought I’d got a puncture – I nearly lost the car completely,” he said. “When I knew it was OK I started to push and the two ahead started to battle so I could catch up. That spurred me on even more.” As he closed on to the tail of the Hesketh, so an inspired Lyons made his move against race leader Fish, lunging down the inside at turn one. That put Fish on the wrong line for the right-left sequence and he ran wide, allowing Hartley to grab second place and Fish lost ground as he recovered. As the leaders caught backmarkers on the penultimate lap, though, Lyons suddenly hit trouble. The Hesketh ground to a halt with a fuel pressure problem and Hartley was through into the lead. He led just two laps but they were the most important ones. Fish secured second ahead of Silvio Kalb (Arrows A4) and Joaquin Folch (Brabham BT49C), while Mike Wrigley (Williams FW07) took fifth ahead of Manfredo Rossi. The Italian’s Brabham BT42 was the best of the Pre-78 contingent, the Martini-liveried car taking honours from Max Smith-Hilliard (Lotus 77) and James Hagan (Ensign N177). Race two will take place tomorrow, Sunday, at 1340 local time.