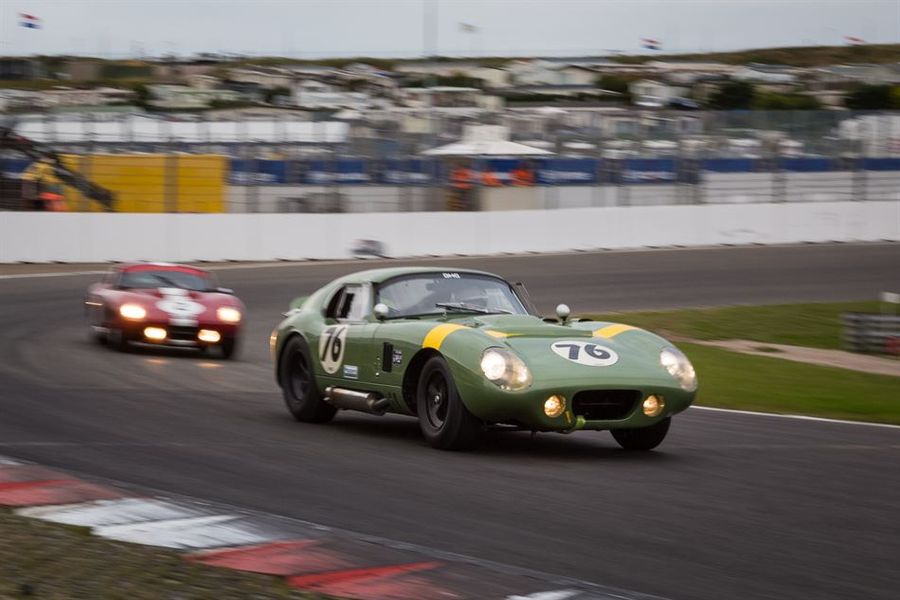 The Shelby Cobra Daytona Coupé of Leo Voyazides and Simon Hadfield survived an early spin from Voyazides to charge through the field for a close-fought win in a hugely exciting Stena Line Gentlemen Drivers race at Zandvoort, ahead of Michael Gans/Andy Wolfe (AC Cobra).

Gans and Wolfe looked favourites for victory when Gans kept close to David Hart’s Cobra Daytona Coupé in the opening part of the race, with the quicker Wolfe set to take over. A safety car period after 25 laps, however, brought the Voyazides/Hadfield Cobra Daytona Coupé back into play. When the green flag was waved again, Hadfield quickly dealt with Oliver Hart (now in the car that his father David started) and then set off after Wolfe. Four laps from the end, Hadfield stormed past on the straight to go on and maintain a narrow lead to the end.

The pivotal moment came on lap 25 when Simon Ashworth blew the engine on the father-and-son TVR Grantura that was leading the C1 class. That put a huge trail of oil in the Audi-S chicane at the back of the circuit. Hadfield spun on it and only narrowly made it back onto the track. The ensuing safety car period helped the Anglo-Greek duo back into the game when a distant fourth suddenly became a very real chance of victory.

“We were so lucky with the safety car,” Hadfield admitted. “It’s just one of those things. And may I add to my official winner’s quote that Oliver Hart drove staggeringly well? That boy will be going places.”

“I locked the rear brakes on the first lap,” said Voyazides, “and spun off. I think I lost maybe 20 places!”

Meanwhile, Michael Gans/Andy Wolfe were ruing a lost opportunity. Gans had been fighting David Hart for their entire opening stint, having the spectators on the edge of their seats. Gans led early on but Hart snatched the lead on lap 11 when the German was baulked by traffic. In fact, Gans took on Hart with such vigour that the Wolfe Engineering crew had to change the rear tyres during the mandatory pit stop.

“In the end I stopped fighting David, as it was going to end in tears,” said Gans. “But yes, we did exactly what we planned – just stay with David, and have Andy finish it off against Olivier. I must say, though, Olivier was quicker than we thought!”

David Hart also regretted the safety car period, as it cost him and his 17-year-old son a certain second place.

“Yes, such a shame. Gans was all over me, but I must say that I took it relatively easy, as I wanted to save the tyres for Oli. And we put our second-best engine in the car – we saved the quick one for Goodwood next week…”

Behind the leading trio, Nigel Greensall charged all the way up to fourth in the Lotus Elan 26R he shared with Graham Wilson to take CLP class honours. Greensall was followed home by Alexander van der Lof/Hans Hugenholtz (AC Cobra) and Carlos Monteverde/Gary Pearson (Cobra Daytona Coupé). In 10th overall, James Hagan/Ron Maydon (Ginetta G4R) took second place among the under 2-litre cars, ahead of the Andrew Haddon/Mark Martin Elan. Haddon had fought his way up to fourth after unusually doing the opening stint but Martin was later usurped by the quicker Greensall and Maydon.

In C2, local heroes Jan Lammers/Nicky Pastorelli (Ferrari 250 GTO 64) were looking for an overall podium after Pastorelli qualified the car on the front row, but the car never really figured in the race. With Lammers at the wheel the car dropped to seventh, having initially fought with Alexander van der Lof’s Cobra for third place. It ran sixth when the former Le Mans 24 Hours winner handed the wheel to Pastorelli. The Italian/Dutchman made up a place at the beginning of his stint but was unable to stop Nigel Greensall and Gary Pearson from passing him. The Ferrari still handsomely won the C2 class, well ahead of a race-long battle between the Keith Ahlers/Billy Bellinger Morgan SLR and the Chris Clarkson/David Smithies Healey 3000, which was won by the Morgan duo.

The C1 battle proved to be a thrilling three-car duel until the Ashworth/Ashworth Grantura expired. This left the two Porsche 911s of Mark Bates and Italian duo Manfredo Rossi/Pietro Vergnano to fight out it amongst themselves but then the safety car intervened. Bates was just ahead of the leaders, and was waved past the safety car, while Vergnano – who had just been lapped by Andy Wolfe and Olivier Hart – remained stuck behind, one lap down.