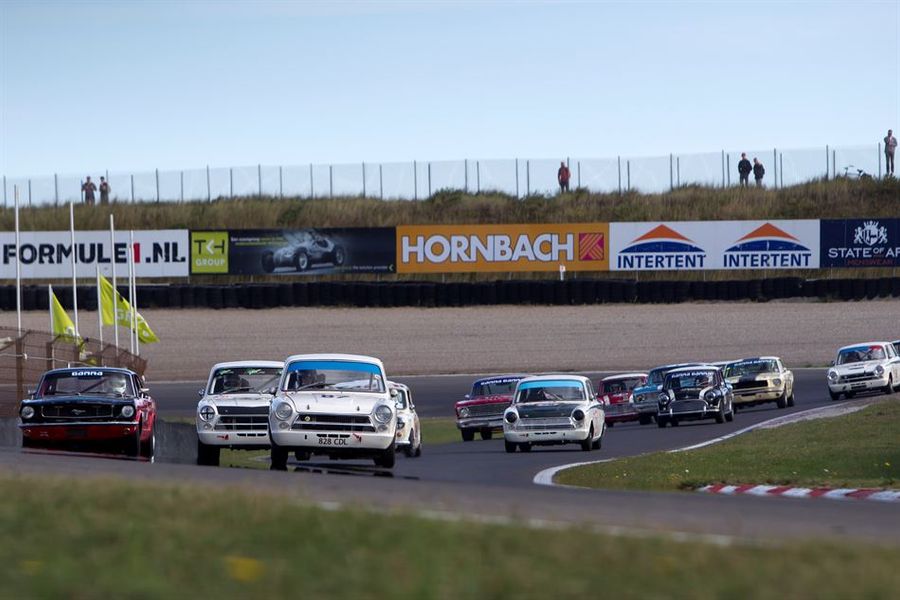 Despite an initial advantage wiped away by a safety-car period, Andy Wolfe/Michael Gans ran away to a controlled victory in the Masters Pre-66 Touring Car race at Zandvoort at the weekend.

Wolfe/Gans (Lotus Cortina) finished 10 seconds up the road from three more Cortinas driven by Mark Martin/Andrew Haddon, Andrea Stortoni and Carlos Monteverde/Gary Pearson. Oliver Hart (Ford Mustang) won the over-2-litre class by finishing fifth, having run second for a while despite a drive-through penalty for jumping the start. The Dutch teenager headed a race-long battle between the Ford Falcons of Chris Clarkson/David Smithies and local man Cees Lubbers. Ron Maydon won the race amongst the Minis after his main rivals faltered.

The Wolfe/Gans Cortina led all but the first few kilometres of the race, Andy Wolfe having been beaten away from the start by Carlos Monteverde. Wolfe quickly restored the order halfway down the first lap before proceeding to establish a lead of around 10 seconds on Monteverde and the quick-starting Olivier Hart in third. Ten minutes into the race, however, Hart was given a drive-through penalty after his getaway had been deemed a touch too quick.

Hart dropping back to ninth meant that the Cortinas of Andrea Stortoni and Mark Martin moved up the order while Wolfe opened up the gap to Monteverde to 17 seconds. After 15 minutes, Stortoni trailed by 23 seconds, and Martin by 33 seconds. A fierce battle for sixth position between the Falcons of Lubbers and Clarkson drew the most attention, and the sensation only increased when Greg Thornton added his heavily-smoking Mustang into the mix.

Hart had clawed his way back up to fifth when the safety car came out, just four minutes shy of the pit window opening. Thorntopn’s Mustang had expired, while at the same time Andrew Beaumont’s Cortina had slid off on the climb towards the Scheivlak. The best part of 10 minutes were needed to cover up an oil trail all the way from the Hunzerug to Scheivlak corner, which meant that almost all cars headed into the pits at their first opportunity.

The safety car had entirely wiped out Wolfe’s 20-second lead which meant that Michael Gans had to work for it all by himself. He did so magnificently, quickly establishing a 10-second gap over whichever car was in second place.

“I pushed a little bit in the beginning since I wanted to be out of sight for anyone following. It was tough since it was very oily at the back but luckily the pace was very good. After that, I tried to control the gap”, said a happy Gans.

With the safety car gone, Oliver Hart quickly stormed up to second place but then couldn’t shake off the Cortinas. In the later stages, one by one went back past again, Andrew Haddon in Mark Martin’s Cortina in the process picking off Gary Pearson (now in the Monteverde Cortina) and then Stortoni. Haddon had to survive a coming-together with Hart’s defending Mustang to take second place.

“Martin and I enjoyed the race very much”, said Haddon. “As for the incident with Hart in the chicane, it’s OK, he’s a young guy. I would have done the same if I were his age!”

A potentially vivid Mini battle was over within a handful of laps. First, Nick Swift – invited by Dutchman René de Vries to share his Mini – was into the pits with a heavily smoking car while Jonathan Lewis was in trouble too. Lewis had to retire his Mini and Swift returned a lap down, so the win was Ron Maydon’s. Local man Bert Mets finished second in class, with Swift and De Vries charging back up to third.