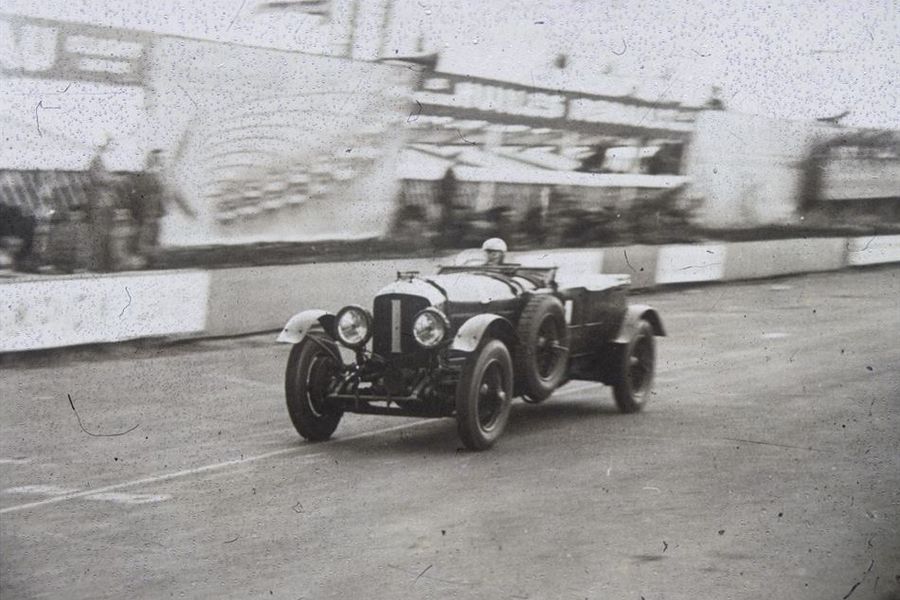 Click on the Video tab for race victory - with wonderfully relaxed period commentary!
Le Mans in 1929 saw the third of Bentley’s string of four race wins and this period film really brings home the rough and ready nature of the event in its early days with the cars racing along tree-lined public roads. The new ‘Speed Six’ model won in the hands of company chairman Woolf Barnato and Sir Henry Birkin – heading home three of the four and a half litre cars in a real demonstration of endurance prowess.
This was the sixth running of the race and already public opinion was causing organisers to make changes, the circuit being altered to cut out the Pontlieue hairpin – residents apparently unhappy about cars blasting past their front doors for 24-hours once a year – with a newly built short link road that took the cars from one straight to another. This reduced the circuit length to ‘just’ 10.153 miles.
As in previous years the circuit was being used to trial new road surfacing materials, although the left-hander before Arnage was paved in bricks, hence its name of Indianapolis in honour of the famous US ‘brickyard’ circuit.  All the corners were signposted, and as a safety concession many of the trees along the circuit had their trunks painted white.
The Bentleys arrived in force for the June race, with the main opposition coming from American machinery. Stutz, who had come second the year before in a race that saw the lead cars all hitting mechanical problems, had brought three cars to Le Mans, while two Chryslers were entered by a Paris garage, one of them a 77 model, a 1930 car with a four-speed gearbox.
At the start the Speed Six Bentley took a lead it was never to lose. It featured a higher-compression version of the company’s 6597cc engine, which produced over 190BHP at 3,900rpm. This was installed in a shorter chassis with a lighter body than standard, and with a 40-gallon fuel tank – the Speed Six managing six miles per gallon at times.
Early on the Bentley’s held the top five positions, though Earl Howe’s car retired with electrical problems. The Stutz challenge was reduced when Edouard Brisson had his car catch fire in the pits, sending him to hospital and although his co-driver soldiered on in the super-charged car, it was eventually put out by a clutch problem.
Overnight the Speed Six powered on but the Bentleys were not bullet proof, Dudley Benjafield’s car delayed with an electrical issue while Frank Clement had the rear ballast of his car shift and catch a brake rod, losing them almost an hour. This put the lead Chrysler driven by Robert Benoist up into third at breakfast – with just 12 of the 25 starters still in the race.
Stutz were down to one car by Sunday morning after George Eyston ran out of petrol – the tank found to be leaking, while the same issue put the Chrysler back down the order later in the morning, handing back to Bentley control of the top four positions that they were to hold until the end.
The only worries for Bentley in the final hour were the practicality of trying to arrange a formation finish, but they pulled it off and the new Speed Six was the winner. It was Barnato’s second win, fitting as he had rescued the company from financial difficulty, and Birkin’s first, though spare a thought for third-placed Benjafield, who had originally been down to drive the Speed Six but had stood aside as he thought Birkin taking the drive would give the company a better chance of the win.
The Speed Six also went on to win the Brooklands Six Hours later that month, Barnato again aboard, and the Brooklands 500 in October.
Result (15th/16th June 1929):
1 Woolf Barnato/Sir Henry Birkin (Bentley Speed Six) 174 laps (1,767.07 miles, 73.63mph)
2 Glen Kidston/Jack Dunfee (Bentley 4.5 litre) 167 laps
3 Dudley Benjafield/Andre d’Erlanger (Bentley 4.5 litre) 159 laps
4 Frank Clement/Jean Chassagne (Bentley 4.5 litre) 157 laps
5 Guy Bouriat/Philippe de Rothschild (Stutz Model M Blackhawk) 153 laps
6 Robert Benoist/Henri Stoffel (Chrysler Six 75) 152 laps
7 Cyril de Vere/Marcel Mongin (Chrysler Six 77) 149 laps
8 Kenneth Peacock/Sammy Newsome (Lea-Francis S-Type Hyper) 136 laps
9 Louis Balart/Louis Debeugny (Tracta Type A) 128 laps
10 Jean-Albert Gregoire/Fernand Vallon (Tracta Type A) 126 laps
Twenty-five starters, no other classified finishers.
1929 Video Speed Six Bentley Le Mans