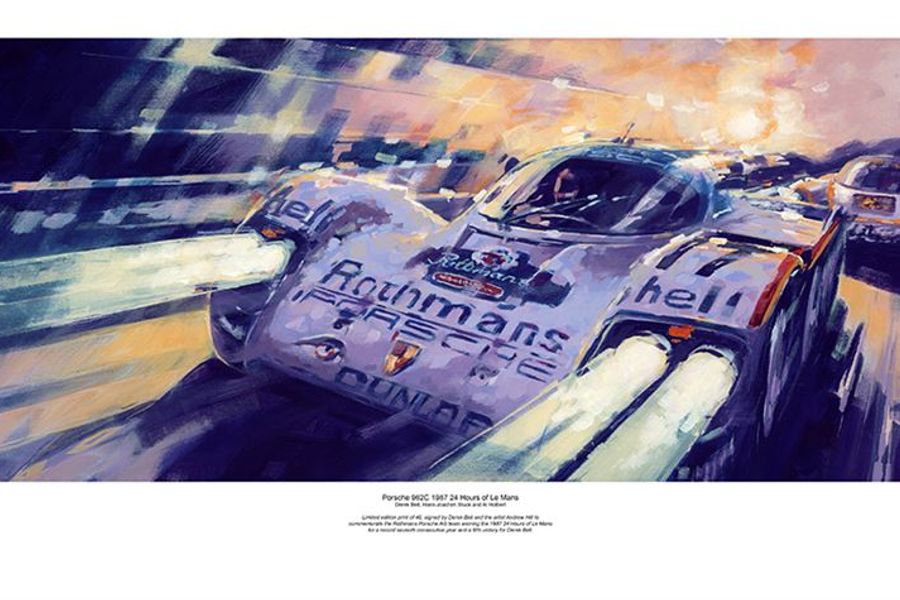 Leading automotive artist Andrew Hill has teamed up with motor sport legend Derek Bell MBE to produce a newly commissioned print to commemorate 30-years since his Bell’s 1987 Le Mans victory in the iconic Rothmans liveried Porsche 962C.
Bell is best known for winning the Le Mans 24_Hours five times, in 1975, 1981, 1982, 1986 and 1987, making him the most successful British driver in the race to date. He was teamed with the Belgian Jacky Ickx in 1975, racing the Gulf Mirage GR8, again in 1981, in a Porsche 936, and finally in 1982 racing a Rothmans Porsche 956. The Bell/Ickx partnership is considered as one of the most famous pairings in motorsport history. Bell went on to win the 1986 and 1987 Le Mans teamed with Hans-Joachim Stuck and Al Holbert racing a Rothmans Porsche 962C.
The limited edition print depicts the Porsche 962C on its way to victory at the 1987 Le Mans 24-Hours. This was the seventh consecutive victory for Porsche and the fifth win for Bell making him the most successful British racing driver in the history of Le Mans.
The print is strictly limited to 40 and is supplied with a certificate of authenticity, each print has been hand signed and numbered by both the artist Andrew Hill and Derek himself making them extremely desirable and collectable.
The print is priced at £250.00 and available from: www.automotive-images.co.uk/porsche-962c-print-signed-by-derek-bell