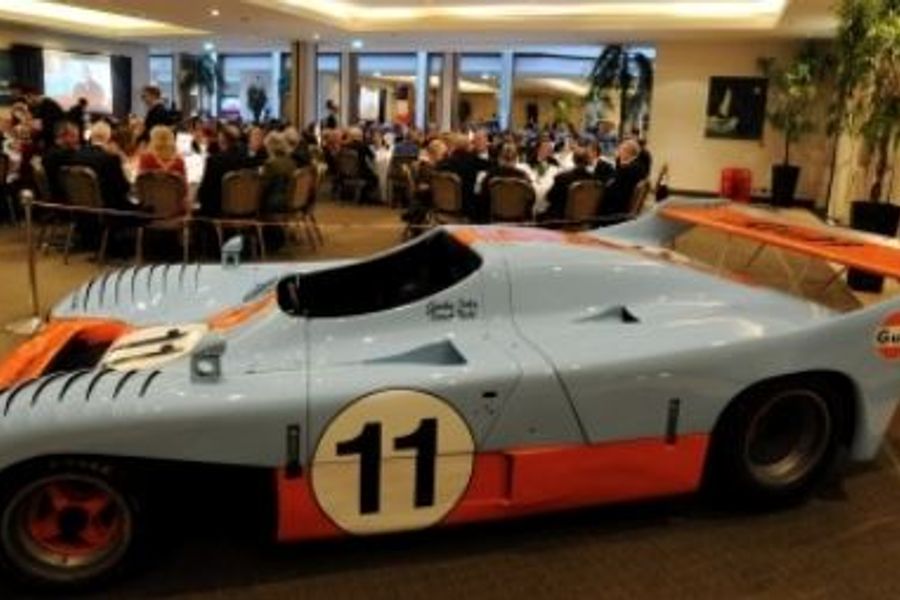 The first victory at Le Mans for one of the iconic Gulf-liveried cars will be celebrated at the Hope for Tomorrow 2018 Legends of Le Mans Dinner. The prestigious event will take place on Thursday 17th May 2018 and mark 50-years since Pedro Rodriguez and Lucien Bianchi won the famous 24-Hours aboard their JWA Ford GT40.
Jacky Ickx and Jackie Oliver repeated the feat in another JWA GT40 in 1969, with Ickx then teaming up with Derek Bell to give the instantly recognisable blue-and-orange livery a third victory in 1975 with the Cosworth-engined Mirage GR8.
Set to take place at a fitting new venue – the Royal Automobile Club’s historic Woodcote Park estate in Surrey – the charity evening will welcome five-time Le Mans winner Derek Bell as well as many other notable motor racing stars. Motorsport commentator Jonathan Legard will be joined once again by fellow broadcaster and respected writer Simon Taylor to host the event. Simon Taylor will interview famous drivers and team personnel, and encourage them to share their memories and insights into the race. There will also be a motor racing-related fundraising auction as well as a magnificent display of racing cars in the spectacular grounds of Woodcote Park.
This star-studded event is held in support of Hope for Tomorrow, the national cancer charity that was founded by Christine Mills in December 2003. Dedicated to bringing treatment closer to patients’ home by providing Mobile Chemotherapy Units, its patrons include David Richards CBE, Ross Brawn OBE, Derek Bell MBE, David Brabham and Martin Brundle.
Tickets are priced at £185 per person, £1,800 per table of 10 guests or £2500 for a Driver Hosted table of 12 (which includes the driver and his guest). For further details or to book tickets, please contact Emma Bowles on 01666 505055 or emmabowles@hopefortomorrow.org.uk