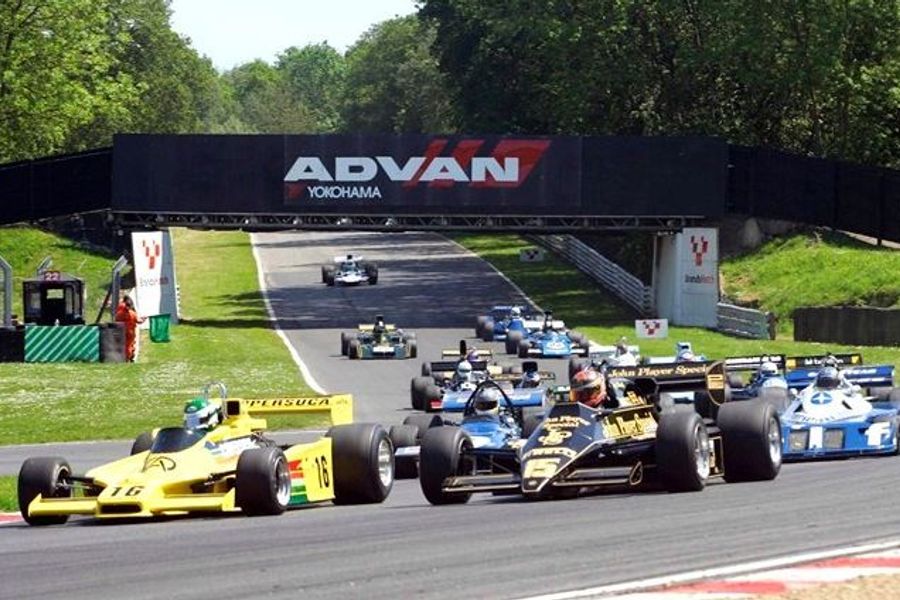 This weekend's Brands Hatch Masters Historic Festival features three days of action on both the are set to use the Grand Prix and Indy circuits with a impressive schedule of 22-races over the three days of May 23rd, 24th and 25th. The packed meeting offers up some of the most crowd-pleasing historic series around plus demonstration runs and a host of off-track activity.

Fabulous F1:
The FIA Masters Historic Formula One Championship will be the centrepiece of the weekend, with two races on the Grand Prix circuit. Entries come from category stars Joaquin Folch (Brabham BT49C), Greg Thornton (Lotus 91/5) and local ace Richard Barber (Williams FW08C), while newcomers Loic Deman (Tyrrell 010) and Andy Wolfe (Tyrrell 011) will be on the pace. There is the Pre-1978 division, too, headed by James Hagan (Ensign MN177) and Nick Colyvas (Shadow DN5).

And more F1 fever!
There will be more Formula One cars on track with a number of cars ready to do demonstration laps. Lotus, Benetton and Prost will be on track adding extra action to the weekend.

Super Touring stars and cars
Super Touring is a welcome extra to this year’ Festival, with BTCC heroes John Cleland and Patrick Watts taking on the likes of Stewart Whyte, Dave Jarman and James Dodd. With Vauxhall Vectras, Peugeot 406s, Honda Accords and Nissan Primeras facing up the challenge of Audi A4s and Ford Mondeos, this should be a terrific snapshot of 1990s touring car racing.

And yet there’s more…
The Brands Hatch Masters Historic Festival isn’t just about racing. Away from the track, there will be loads of things to do and see and there will be something for everyone: there are displays from car clubs, a funfair for the kids, trade stalls and plenty of places to grab something to eat and drink.

Stars of the 70s
Monday’s Indy circuit race action is headed by the Masters 70s Celebration series, which brings saloon and sports cars of the 1970s to the track. Look for Nick Swift in his Mini 1275 GT, a replica of Richard Longman’s 1978 and ’79 British Saloon Car Championship-winning car while Aston Martin, Ferrari and Fords will aim to stop his bid for victory.

Pit stop action
Don’t forget that a number of Masters categories have pit stops in their races and the Gentlemen Drivers Pre-66 GT Championship is going to be decided with slick pit work. Driver changes will be done swiftly to ensure track position isn’t lost, putting the emphasis on teamwork as well as racecraft.