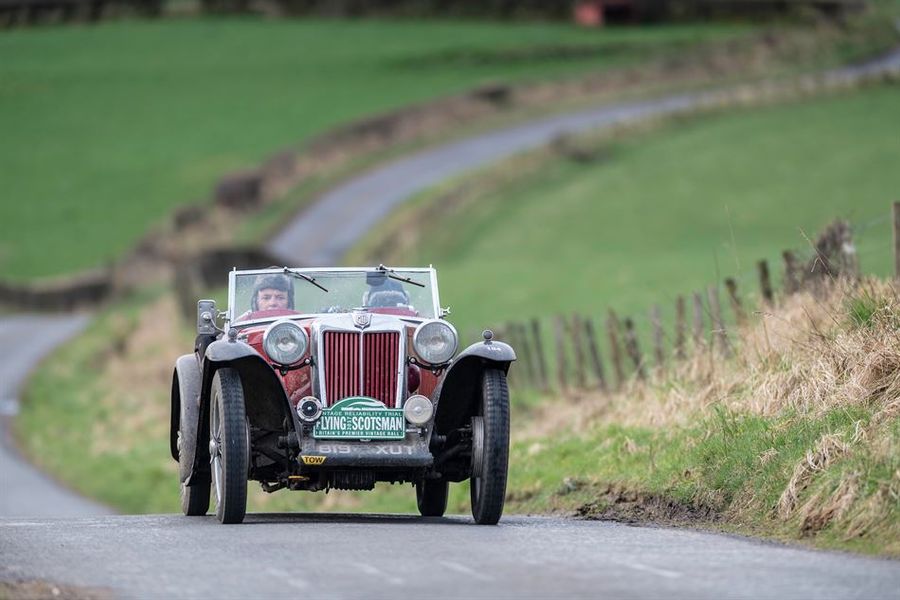 The Endurance Rally Association’s ninth Flying Scotsman Rally ended in a nail-biting finish at the weekend as the winning crew of Paul Crosby and Ali Proctor suffered two breakdowns in their 1939 MG TB Supercharged on the final run for the chequered flag at Gleneagles, Scotland.
The event started at Slaley Hall in Hexham, Northumberland, on 31 March to tackle the roads through Kielder Forest with over 750-miles of rally ahead of the 103 crews. Storming into the lead at the end of day two, leap frogging John Abel and Leigh Powley with their 1937 Lagonda LG4, the MG suffered broken rear suspension issues but got back on the road thanks to the ERA’s mechanics.
It was a tight finish with the winning crew securing an overall total of 00:19:37, only 00:00:24 separating them from Abel and Powley, who have finished second for the past two years, on 00:20:01.  Bill Cleyndert and Dan Harrison took third place in their 1928 Ford Model A with a total of 00:20:21.
Paul Crosby said: “I’m absolutely overwhelmed because we never thought we had any chance of coming here and winning. We’ve done two Flying Scotsman events and Ali didn’t make a mistake all weekend.
“We thought it would be a big engined car that would come here and win it. They rearranged the test very slightly this year to make it a lot fairer for smaller cars so we were good on some tests and the big cars were good on others. A brilliant event, incredibly well organised, and amazing amazing result for us.”
There was also a win for the oldest Pioneer car in the rally, a 1907 Itala 40, which is well travelled having competed in the ERA’s Road to Mandalay and Peking to Paris Motor Challenge, crewed by David Ayre and Anthony Thompson.
Fred Gallagher, ERA Rally Director, said: “This event just gets better and better. The standard of cars and driving is excellent but the credit must go to the navigators who faced an intense challenge over the three days. Our thanks go to every crew and marshal who once again made it a fantastic event for the vintage motorist.”
There were two special awards presented at the prize giving dinner at the luxurious Gleneagles Hotel. The Concours D’elegance went to Clint Smith and Brad Smith in a 1938 Jaguar SS100. The Spirit of the Rally award went to Mitch and Wendy Gross in their 1938 BMW 328.
The 2018 Flying Scotsman Rally will take place from Thursday 26th to Sunday 29th April, marking its tenth anniversary by returning to its southern roots. Entries will open at the end of May 2017.
Flying Scotsman ERA MG Rallying