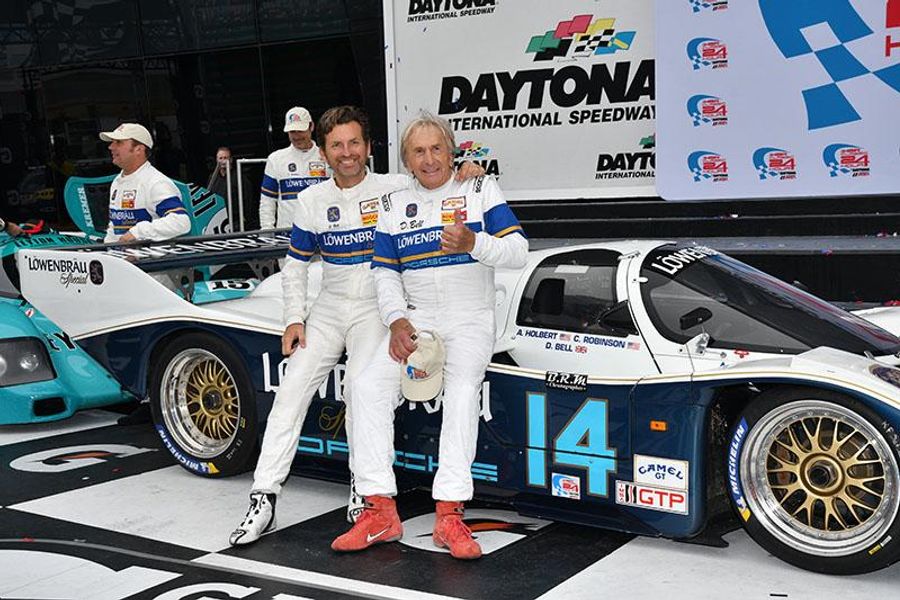 Late drama and emotional finishes brought the biggest running of the HSR Classic Daytona presented by IMSA to a fitting conclusion Sunday afternoon after 24 Hours of close competition at Daytona International Speedway (DIS), November 16 - 17. Seven different Run Group winners were crowned and presented with special-edition HSR Classic Daytona 24 Hour B.R.M. Chronographes, but no win was more memory stirring or emotional than Gunnar Racing in Group C with the return of the legendary Holbert Racing No. 14 Lowenbrau Special Porsche to DIS victory lane.

Sports car racing legend Derek Bell, the now 78-year-old who was one of Holbert's original driving stars, drove the No. 14 Porsche 962 HR1 to the finish line. This weekend's victory came 30 years after Bell's last overall win in the 24 Hours of Daytona in another Porsche 962 in 1989. Bell's winning co-drivers this weekend were his son, Justin Bell, HR1 car owner Rodrigo Sales and Gunnar Jeannette. 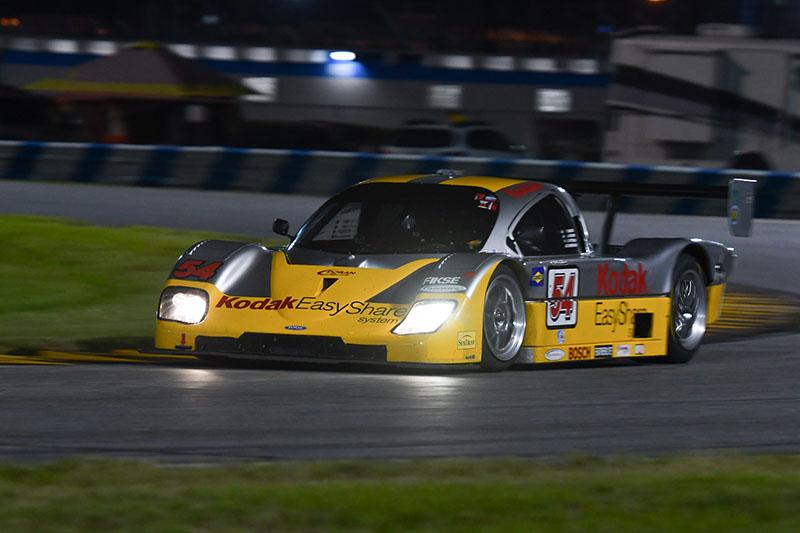 Group C shared the track with the competitors in Group D, which also saw a former overall winner of the 24 Hours of Daytona win again on the 3.56-mile road course at the "World Center of Racing." In 2004, car owner and driver Forest Barber shared his 2003 No. 54 Doran JE4 Daytona Prototype with Terry Borcheller and two other co-drivers to score the overall 24 Hours of Daytona victory. Barber still owns the No. 54 today and joined Borcheller in celebrating the 15th Anniversary of their biggest win together with a return visit to DIS victory lane.

Lola was the featured marque of this weekend's fifth running of the HSR Classic Daytona and the spotlight on the renown British race car manufacturer shined the brightest in Group A. 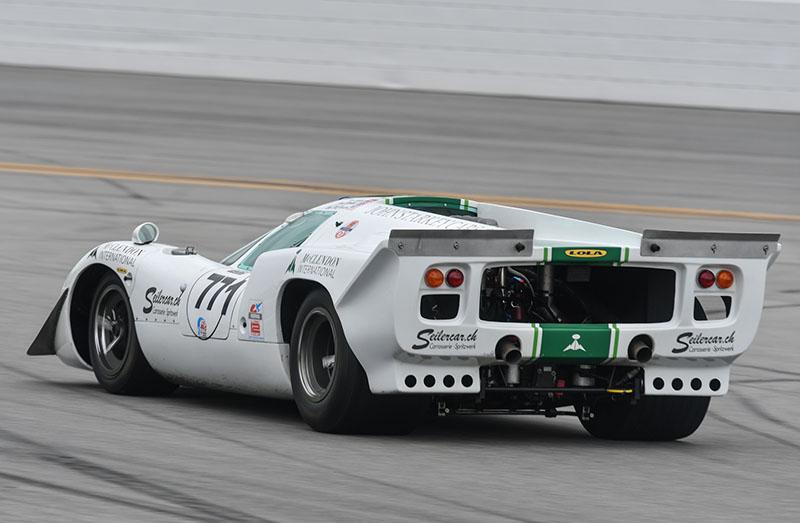 Three different 1969/1970 era Lola T70 MkIII race cars scored at least one win in Group A's four segments, but in the end it was the 1969 No. 77 McClendon International entry of Toni Seiler that took the victory. The win was the second straight "HSR Classics" victory for Seiler and the McClendon team after a win last December in the HSR Classic Sebring 12 Hour at Sebring International Raceway.

Former Daytona Beach resident Joao Barbosa also scored consecutive "HSR Classics" victories, but both of his wins were earned in this weekend's race. Barbosa co-drove with Daytona Beach-based teammates JC France and Tim Jernum to win Group F in an ex-Action Express 2015 No. 9 Corvette Daytona Prototype, a car Barbosa raced in its prime.

Barbosa was also a last-minute addition in Group E to the Daytona debuting No. 7 Peugeot 908 HDi FAP of David Porter, who called on his former teammate after a heavy mist and slight rain began to fall Saturday evening.

At the wheel of the Peugeot for today's fourth and final Group E race to the finish, Barbosa survived an unintentional contact incident at the start with three-time HSR Classic Daytona winners Rogers Motorsports and its 2005 No. 38 Motorsports Audi R8 LMP. The race-leading Audi and driver Doug Smith were knocked from contention as Barbosa went on to take the segment win and overall Group E victory with Porter.

In Group B, Alain Rüede emerged to take the lead at the halfway point in his 1982 No. 21 Chevrolet Camaro IROC and went on to score the overall group lead over not only his GT competition but a stout field of sports racers as well.

Group G was won by co-drivers Todd Napieralski and Lee Saunders in the No. 39 Chevrolet Camaro.

In addition to the seven overall winners, the top-finishing GT entries in Groups A, C, D, E and F- and the highest-placing Prototype in Group B - were each presented with B.R.M. Chronographes for a total presentation of 13 of the fine French luxury timepieces to deserving HSR Classic Daytona winners.

The father-and-son team of Grahame Bryant and Ollie Bryant took GT honors in Group A with an impressive third-place overall finish in their 1967 No. 29 Chevrolet Camaro Z/28.

Bill Heifner was the top Group C GT entry in the 1993 No. 8 Chevrolet Camaro GT1 while Richard Howe took Group D GT honors with a third place overall showing in his quick 1989 No. 19 Ford Mustang T/A.

Andy Pilgrim, who was a co-driver with Barber and Borcheller in the No. 54 Doran for their Daytona win 15 years ago, was competing at the "World Center of Racing" again this weekend. Pilgrim and co-driver Kent Hussey were the top GT finishers in Group E with a fourth-place overall run in the 2011 No. 53 Ferrari 458 GT3.

With Rüede winning Group B overall in his GT Camaro, top Prototype finishers Marc Devis and Robert Blain were presented with a B.R.M. Chronographes timepiece after a great run that saw them finish second overall in the 1975 No. 8 March 75S.

Next up for HSR is the season-ending Classic Sebring 12 Hour, Pistons and Props, presented by the Alan Jay Automotive Network, December 4 - 8, at Sebring International Raceway. 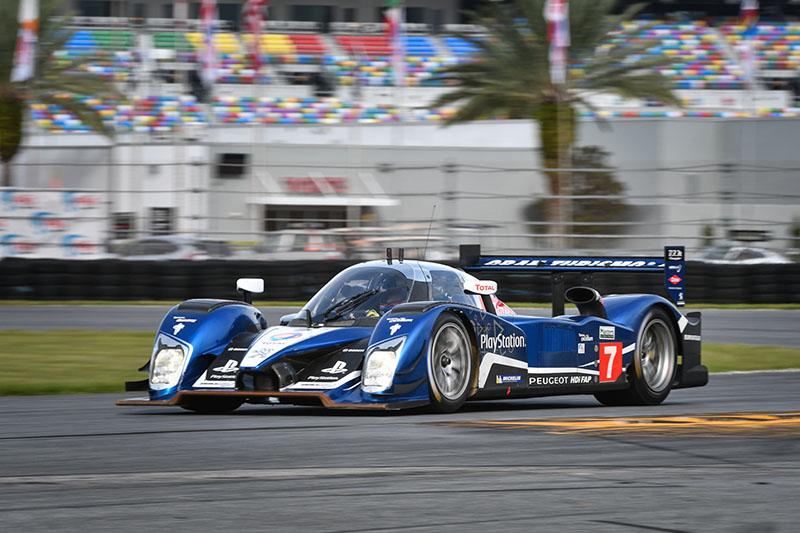