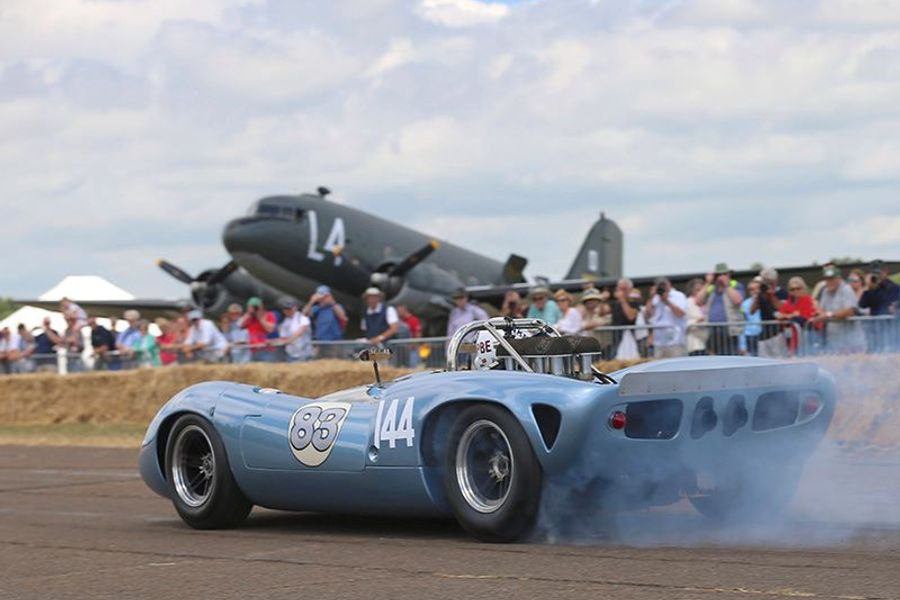 Bicester Heritage on Oxfordshire was brought to life over last weekend, as the former Second World War bomber station played host to Flywheel, a celebration of classic wings and wheels. The festival experienced its most successful year to date, welcoming hundreds of cars, motorcycles and vintage aircraft to the iconic site.
Highlights from this year’s event included a huge collection of motorcycles, with models ranging from the 1920s through to the 1970s. The oldest confirmed entrant, a 1924 Henley, proved a firm crowd favourite. Also on site was an exclusive collection of Brough Superiors. Regarded as the Rolls-Royce of motorcycles, they delighted spectators with riders resplendent in motorcycle gear from the period.
Taking to the skies were vintage aircraft, performing gravity-defying aerobatics. Nine Tiger Moths swerved and ducked in the sky, showcasing the impressive manoeuvrability of these light aircraft. Festival-goers were also treated to a Mk IX Spitfire flying in its original 222 Squadron Code ZD-B livery joined in a dogfight recreation by a Hispano Buchon in Messerschmitt ‘Black 8’ livery.
Cars, it goes without saying, spilled out of aircraft hangers and onto the track, as world famous Jaguar D-types, Bentleys and Aston Martins took to the course. Highlights included Simon Evans’ 1953 Allard J2X Le Mans, a prime example of motorsport aesthetics shaping competition car design, and Julian Grimwade’s 1934 Frazer Nash ‘Norris Special’, which is still running on the original Alvis engine that was fitted back in 1948.
Richard Grafton, director of Flywheel, observed: “It was the best year yet for Flywheel and we can’t wait to see what next year will bring. The event has a great atmosphere and it attracts the UK’s best examples of cars, aircraft and military vehicles. Entertainment such as the Demon Drome wall of death, as well as all of the military hardware that is brought onsite, add a huge quantity and range of entertainment, that allows Flywheel to appeal to the whole family.”