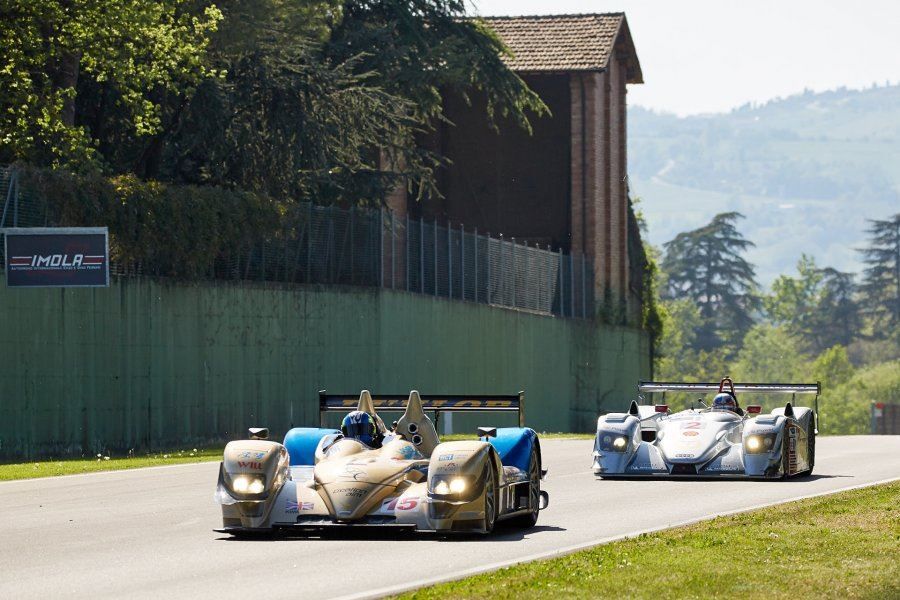 The Masters Endurance Legends season started at Imola at the weekend, with Alex Kapadia’s ORECA-Nissan taking the flag in both races, though he was dropped fto fourth by a penalty in race two.

Kapadia converted pole position into a win in the opening race of the weekend. He came back through to pass Steve Tandy’s Lola-Mazda B12/60 with two laps to go, having dropped behind the P1 car after the pitstops.

A thrilling battle for third place was ended in favour of Gareth Evans who used his Creation-AIM P1 machine to overtake Keith Frieser’s ORECA-GM FLM09 for the final podium spot while Engen ran the pair close in his Audi R8 P1.

The ORECA 03s of Michel Frey and Ralph Meichtry were in hot pursuit of Kapadia up until the pitstops – the three drivers with previous Le Mans experience driving away from the opposition led by Tandy’s Lola. At the halfway mark it all fell apart for both Swiss drivers, as Frey was handed a 15-second stop-and-go penalty for avoidable contact with the Venturi LM600 of Gérard Bouvet and Christian Perrier. Having done his regular pitstop, Frey returned to serve his penalty but didn’t bother to go back out again. Meanwhile, Meichtry pulled into the pits on lap 16, his race over.

Due to the various handicaps in pitstop times, Kapadia dropped behind Tandy during the pitstop phase and was now faced with closing an 11-second gap. The ORECA driver took five laps to be back snapping at the Lola-Mazda’s gearbox and made the pass on lap 20. On the same lap, Evans swooped past Frieser for third. Setting his fastest personal time right at the end, Engen was also looking for a way past Frieser but the Canadian managed to stay ahead of the American.

In his Aston Martin DBR9, Nikolaus Ditting sealed GT honours when the Antonio Fuoco/Yoshiki Ohmura Ferrari 458 GTE suffered gearbox problems. As the rest of Ditting’s opposition also faltered – his lead rival Dominik Roschmann in the second DBR9 getting a drivethrough penalty – Ditting’s life was made easy in the second part of the race, the German taking eighth overall.

On Sunday Kapadia made it two out of two on track by winning the second Masters Endurance Legends race, only to be demoted post race a time penalty for a pit stop infringement placed him 4th overall in the final results. The ORECA-Nissan 03 P2 driver dominated from start to finish, heading the P1 machines of Evans and Travis Engen.

Evans had a race-long fight with Tandy’s P1 Lola-Mazda B12/60 before Tandy pulled off with a puncture on lap 17. Also in the mix from the start was Engen’s Audi, who was hot on the heels of Tandy’s Lola when he spun off into the gravel on lap 19, causing the red flag to come out with three minutes still on the clock. The race would not be resumed.

The race’s main excitement came in the laps leading up to the pitstops, as Michel Frey and Ralph Meichtry joined Evans, Tandy, Engen and Frieser’s ORECA FLM09 in a six-car battle for second place. The two quick Swiss drivers had come from the back in their ORECA 03s and soon began mixing it with Kapadia’s initial pursuers, Frey moving up to third by lap 9.

The longer pitstops that were forced onto former Le Mans drivers Kapadia, Frey and Meichtry did not handicap Kapadia much, as he kept a 31-second lead over Tandy when the pit window closed. Frey and Meichtry, however, dropped back well behind Tandy and were fighting with Evans’s Creation when Frey spun into the gravel at Rivazza on lap 14, leading to the arrival of the safety car.

At the restart, Kapadia quickly ran out a sufficient lead over Tandy – and then over Evans and Engen when Tandy dropped out with his puncture. Meichtry’s progress was stopped by a gaggle of backmarkers separating him from Engen,

Meanwhile, Keith Frieser’s ORECA FLM09 was lost during the pitstop phase, the American coming into the pits but failing to leave it again. This handed positions to Newton’s Lola-MG EX257 and Ahrabian’s Lola-Lotus P2 Coupé.

In the GT class, Dominik Roschmann made it 1-1 in his intra-Aston Martin DBR9 battle with Nikolaus Ditting by bringing his DBR9 home ahead of Ditting’s similar machine. Roschmann was further helped by yesterday’s winner Ditting spinning on lap 2. The Gérard Bouvet/Christian Perrier Venturi LM600 finished a distant third in class.

Our thanks go to Masters Historic Racing for their help with the report.