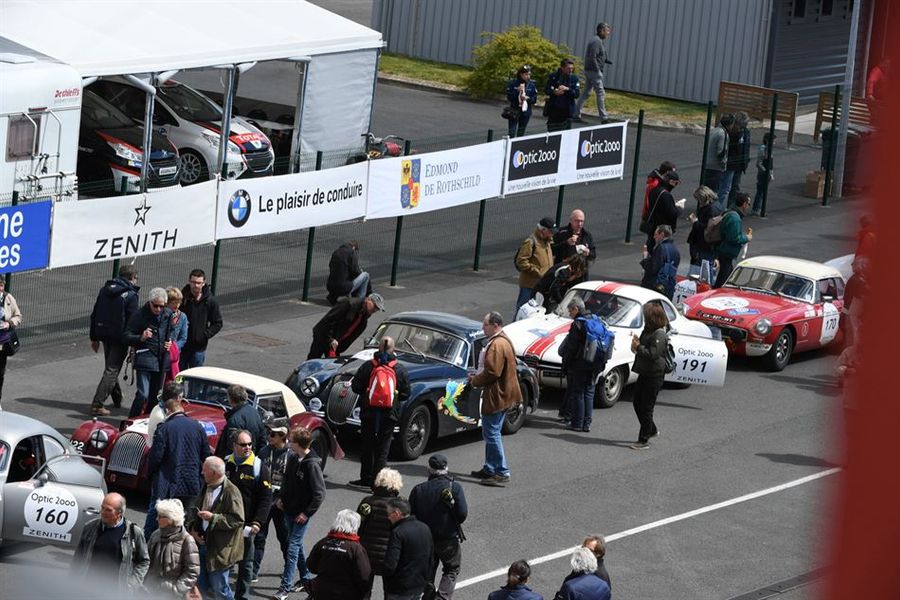 After their tour of Brittany the Tour Optic Auto 2ooo crews left the bucolic parc fermé of the Château de Goulaine to head south with a 392-km leg on the day three’s programme, which included two special stages and races on the Val de Vienne circuit. On the way to the Limoges stop-over the Tour caravan had ample opportunity to appreciate the beauty of the varied, rolling landscapes of the Pays de la Loire, Poitou Charente and Limousin regions. They enjoyed lunch in the Abbey of Celle-sur-Belle rebuilt in the XVIIth century on the remains of an old abbey dating from the XIth century, a monument representing more than 1000 years of history at the foot of which the cars in the Tour stopped briefly before continuing on their way.
From a sporting point of view the day’s first special whetted the drivers’ appetite. This flowing timed stage was among the shortest and quickest of the 2017 event and it required the closest concentration on the part of drivers and co-drivers alike. After lunch they went to the Val de Vienne circuit whose selective layout comprises a mixture of twisty sections and long straights. After that the crews put their helmets back on to tackle the final timed stage, Saint Martin de Jussac, bringing the third day’s racing to a close.
British crew Andrew Smith and James Cottingham in their Ford GT40 increased their lead in the overall general classification in the VHC Competition category by winning the three stages of the day. They are now 3m 23sec in front of French duo Ludovic Caron-Denis Giraudet (Shelby Cobra) and 3m 26sec ahead of Jean-Pierre Lajournade-Christophe Bouchet, winners of the 2016 event, in their 3.8-litre E-Type Jaguar.
There is no change in the overall general classification in the G1 and G2 Competition category still led by Germans Jorg Richard-Louis Lemberg (Alfa Romeo 1750 GTAM). Mr. John of B in his Ligier JS2 DFV continues to hold first place in the H1, H2 and I category. In the Regularity section the Ferrari 250 GT Lusso of Frenchmen Eric Hamoniau-Arnaud Dernoncour leads and they now have two new pursuers in their wake, Jean-François and François Nicoules (Champion Studebaker coupe) and Gaëtan Demoulin-Mathieu Sentis (Peugeot 204 Coupe).
Leg four of the Tour Auto Optic 2ooo (464 km) will bring the entrants from Limoges to Toulouse. It includes two special stages, Beyssac and Saint-Céré in the morning, followed by races on the Albi circuit in the afternoon.