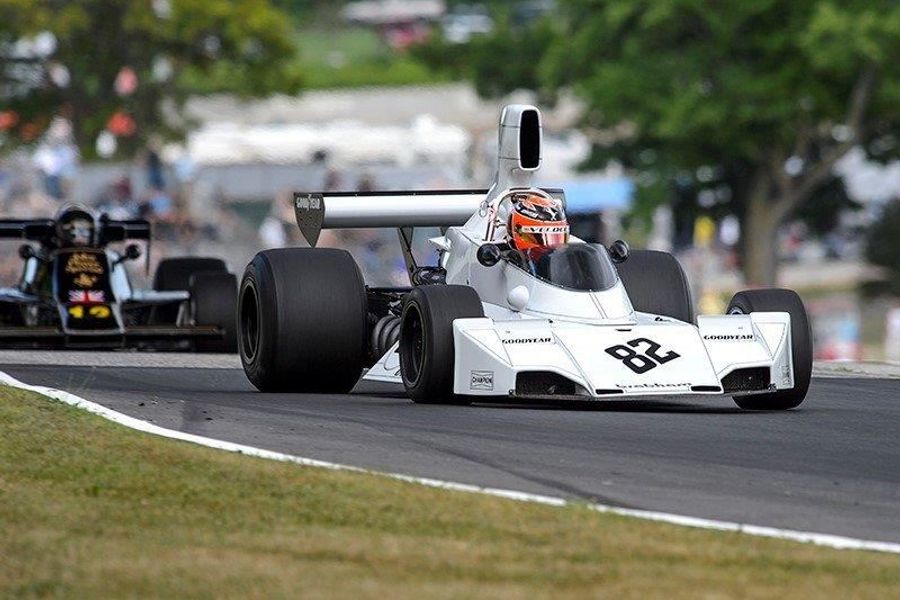 A double win for Ethan Shippert’s Brabham BT44 and one for Greg Thornton (Lotus 77) were the highlights of three evocative Masters Formula One races at the Road America’s annual The Hawk historic racing weekend.
Greg Thornton (Lotus 77) started the opener from pole, with the Brit leading Ethan Shippert in the Phil Reilly-owned Brabham BT44. Shippert bagged the lead at the end of the opening tour but Thornton wasn’t to be denied as the two traded the race lead, with Shippert quicker in a straight line and Thornton quicker through the corners. Shippert eventually wriggled back ahead and stayed there to the end keeping Thornton behind him to the flag.
A great fight raged for third as James Hagan (Tyrrell 011) and James King (March 761) scrapped over the final podium place with Duncan Dayton’s Lotus 79 not far behind. King managed to take third from Hagan, as Dayton came under pressure rom the similar car of Doc Bundy, although Dayton just held on to the place.
Shippert started race two from pole and the ex-Emerson Fittipaldi/John Watson Brabham burst away to head Thornton’s ex-Mario Andretti Lotus 77. James King chased Thornton in the ex-Vittorio Brambilla March 761, while James Hagan’s Tyrrell fended off Bud Moeller (Ensign MN179). After a driveshaft failed in the opener, Chris Locke’s Lotus 77 bagged sixth as Ron Maydon’s Arrows A1 pipped Robert Blain (March 751), Andrew Beaumont’s Lotus 81 and Doug Mockett’s Wolf WR6.
After Sunday morning rain had passed, the third race began in sunshine and Shippert blasted away top lead once more. However, the Brabham succumbed to driveshaft problems on the opening lap allowing Greg Thornton to guide his Lotus to victory. Behind him, King and Hagan gave chase but Greg held on to score victory. For fourth came a great fight, as Bundy, Moeller and Beaumont traded places in the ground-effect Head class, with Bundy coming out on top.
With Shippert and Thornton having proved their class, the battled will be renewed when Masters USA heads to the Rolex Motorsport Reunion at Mazda Raceway Laguna Seca, August 19/21 August.
The Hawk historic racing weekend Brabham BT44 Masters Formula One Road America Ethan Shippert Lotus 77 Greg Thornton