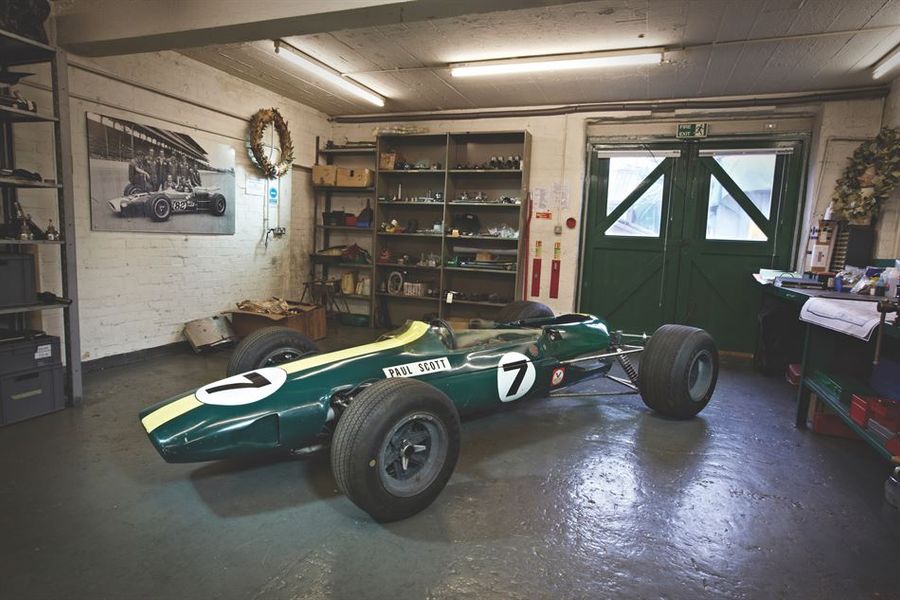 Few machines are as iconic as the Lotus-Climax Type 33, chassis number R11, the car driven by Jim Clark to first place in the 1965 Belgian, British, German and Syracuse Grands Prix on the way to his second Formula One World Championship.
This piece of motorsport history will be the centrepiece of the MotorSport Hall of Fame at Race Retro, held at Stoneleigh Park, Warwickshire, from the 24th to the 26th of  February, where R11 will make its first public appearance in over four decades.
When the Type 33 made its first took to the track in 1964, it represented the peak of monocoque chassis design and Clark’s Lotus, the second of six models to be completed, was powered by a 1.5 litre Coventry Climax V8 engine.
Victory at Syracuse in April 1965 commenced R11’s racing career and four months later 320,000 spectators at the Nürburgring saw Clark breaking the track record from a standing start on the opening lap before taking the world title.
In 1966 the 33 was fitted with a 2-Litre BRM engine as asuitable three-litre engine was not available, and in the following year, its body and dashboard were modified to accommodate Graham Hill, who drove the Lotus to second place in Monaco.  By the Dutch Grand Prix less thn a month later the 33 was replaced by the famous Lotus 49 at Team Lotus, Monaco the last race for the type as a works car.
R11 was then sold to a Canadian privateer and, now fitted with an Oldsmobile V8 plant, was last raced at the Seattle 200 in 1969. After then, it was dismantled and stored before returning to the UK in 1978 when R11 was acquired by its current owner, who realised that he was presented with the unique opportunity to acquire the ‘Mona Lisa’ of the racing world.
At that time the Lotus’s condition was ‘effectively as original, and it was then carefully stored for 38 years. Today R11’s custodian believes that ‘the time has come for it to be returned to its one-time home base’ and it is to be refurbished by Clive Chapman, who will also appear at Race Retro to discuss the project, and his crew at Classic Team Lotus.
Motoring writer Doug Nye believes the Lotus to be ‘one of the mouth-wateringly significant of all surviving, British Formula One cars’, and the chance visit to the MotorSport Hall of Fame at Race Retro and pay tribute to the car indelibly associated with the driver described by Sir Jackie Stewart as ‘the epitome of excellence’ should not be missed.
The MotorSport Hall of Fame at Race Retro will feature a wealth of stunning racing cars and motorcycles as well as heroes of rallying. It will also host the Motor Sport Live Stage with interviewees including Classic Team Lotus’ Clive Chapman, Le Mans legend Tom Kristensen, Cosworth designer Mike Costin, and a stunning line up of racing and rallying heroes.
Lotus 33 Clark Lotus Jim Clark Race Retro