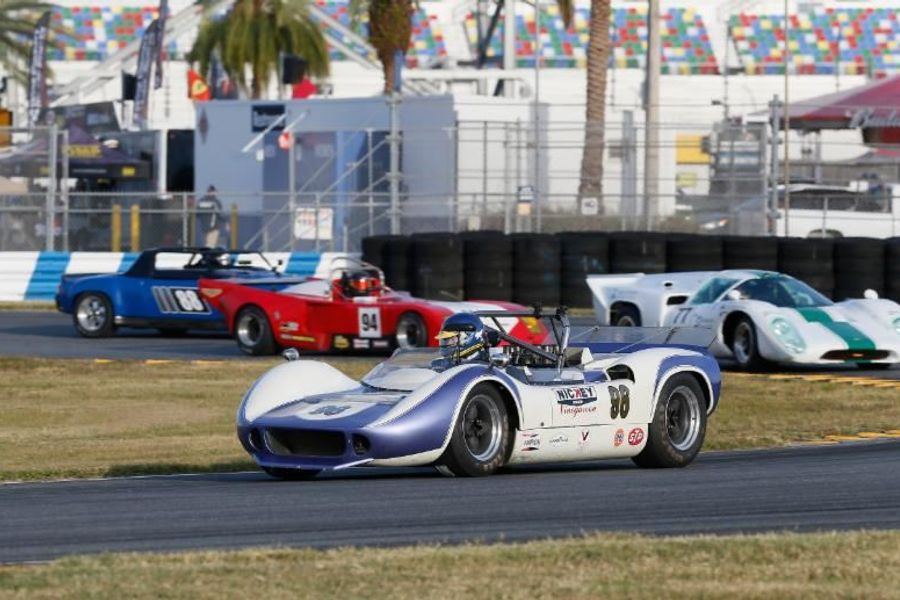 Ron Zitza scored his first HSR Global GT series victory with a home-track win while Mike Banz moved closer to clinching the 2016 HSR RS Cup championship with a narrow victory Sunday in the final day of competition of the HSR Daytona Historics at Daytona International Speedway on Sunday (November 13th). Zitza was making his Global GT debut but it was on a more than familiar track. A resident of nearby Apopka, Florida, Zitza and his Orlando-based Zotz Racing team have been competing on the DIS road course for decades.
On Sunday, Zitza drove a 2006 No. 32 Porsche 997 GT3 Cup, owned by Zotz team driver Brad Blum, and led the similar Porsche of Global GT points leader Jonathon Ziegelman across the finish line. Ziegelman drove his 2008 No. 911 Porsche 997 GT3 Cup to the runner-up placing while Ryan Harrold was third in the 2009 No. 101 Porsche 997 GT3 Cup. Both Ziegelman's and Harrold's Porsches are prepared by KMW Motorsports.
Banz took another step toward the RS Cup title with the victory in his Heritage Motorsports 1974 No. 13 Porsche 911 RSR with one 2016 race remaining, but he was chased to the finish line by Todd Treffert in one of the closest races of the weekend.
Treffert frequently moved his Speedconcepts 1974 No. 141 Porsche 911 IROC alongside of and right on the rear bumper of Banz's similar race car but could never quite find a way past. Banz's margin of victory over Treffert at the finish line was a snug .160 of a second. Third place in the RS Cup race went to Fred Schulte in the 1973 No. 31 Porsche 911 IROC prepared by Heritage Motorsports.
Sunday also featured two one-hour B.R.M. Chronographes Enduros that produced a total of five different class winners.
In Sunday morning's B.R.M. Vintage and Classic Enduro, Toni Seiler went two-for-two in feature race wins at the HSR Daytona Historics in his 1969 No. 77 Lola T70. Seiler scored overall and Classic division honors on Sunday in an exact repeat performance of his victory in Saturday's Vintage and Classic night race.
The Vintage class B.R.M. Enduro win went to accomplished race car driver and legendary rock-and-roller Brian Johnson for the second-straight race weekend. Johnson's victory Sunday in his 1970 No. 21 Royale RP4 prepared by Heritage Motorsports followed a B.R.M. Enduro win at the Savannah Speed Classic two weeks ago.
In Sunday afternoon's B.R.M. Historic Prototype and GT Modern Enduro, the same 2009 No. 52 Oreca FLM09 that Juan Gonzalez drove to the win in a Saturday night race was victorious again. On Sunday, however, Gonzalez handed the No. 52 off to his coach and well-known professional co-driver Butch Leitzinger.
Leitzinger took the overall and Historic Prototype win and was joined on the class podium by runner-up John Reisman in his 2010 No. 33 Corvette Daytona Prototype. Third-place went to co-drivers Keith Frieser and Ross Thompson in a 2009 No. 11 Oreca FLM09.
Juan Lopez-Santini rebounded from a Sunday morning transmission repair to score the B.R.M. GT Modern class win in his 2008 No. 810 Porsche 997 GT3 Cup prepared by the 901 Shop. He also went two-for-two in HSR Daytona Historics feature race victories after winning the GT Modern night race on Saturday.
Lopez-Santini missed Sunday morning's Global GT and final Group 10 WeatherTech Sprint while his Porsche was begin repaired but didn't miss a beat in the 60-minute B.R.M. race. In addition to taking class honors, Lopez-Santini was third overall in the 21-car field behind Leitzinger and Reisman.
Harrold was second in B.R.M. GT Modern in his No. 101 Porsche while Ziegelman co-drove to third with Linden Burnstein in his 2007 No. 917 Porsche 997 GT3 Cup, another Porsche from the KMW Motorsports stable. Harrold's father, John Harrold, finished one spot behind his son in the overall running order on the track and snagged B.R.M. Historic class honor in his 1979 No. 94 Chevron B23/36.
Seiler shared the overall and B.R.M. Classic podium with second-place finishers Andrew Beaumont and Nigel Greensall, who co-drove a 1966 No. 96 McLaren M1B. Banz finished third in his No. 13 Porsche. Joining Johnson on the B.R.M. Vintage podium was the second-place 1975 No. 85 B-G Racing Ford Escort of Sean Brown and third-place finisher Tom Briest in his Zotz Racing 1970 No. 71 Porsche 914/6 GT.
Sunday's final WeatherTech Sprints produced several repeat and first-time weekend winners.
In Sunday's first race of the day, Phil Lasco took the Group 10 WeatherTech win in his 2000 No. 14 Panoz GTS after finishing second to Lopez-Santini in Saturday's first sprint.
Brad Hoyt also made it to victory lane in his 1969 No. 6 Corvette on Sunday in the WeatherTech Group 5 sprint, chasing down the Mustang Boss 302 of Saturday Group 5 winner Curt Vogt for the victory.  Debuting Daytona competitor Helen Elstrop won WeatherTech Group 2 on Sunday in a 1967 No. 5 Alfa Romeo GT Jr. owned by Dean DeSantis.
Competitors that swept their WeatherTech sprints on both days included Seiler (Group 7), Reisman (Group 6), Brown (Group 3), Doug Richmond in Group 9 in his Falcon-bodied 2008 No. 63 Riggins GT1 and Bryan Collyer in the Group 8 stock-car class in his 2001 No. 90 Chevrolet Monte Carlo.
Next up for HSR is the inaugural Classic 12 Hour at Sebring, December 1st to the 4th, at Sebring International Raceway. Officially entitled the Classic 12 Hour at Sebring, Pistons and Props, presented by the Alan Jay Automotive Network, the weekend also includes the season-ending races that will decide the 2016 HSR Championships.
Porsche Daytona HSR