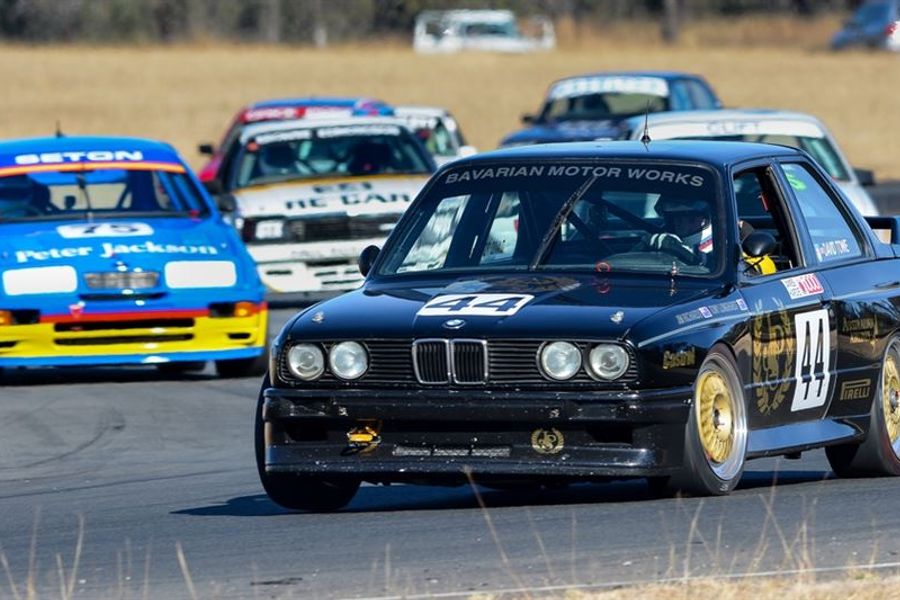 This weekend, April 29th to May 1st, will see a full field of Group C & Group A Touring Cars racing for class and outright honours in round two of the 2016 Heritage Touring Cars Championship at Morgan Park Raceway, the only Queensland appearance for these cars in 2016. With a record grid of 26-cars entered, all vying for points in the championship, racing will be fast and close and lap records are expected to be under threat.
Headlining the race for line honours in Group A will be the 1991 Sandown 500-winning ‘Godzilla’ GIO Nissan Skyline GT-R, fresh from a strong performance at the recent Phillip Island Classic. Hot on the heels of the Japanese monster will be two of the fire-breathing Ford Sierra RS500 rocket-ships that dominated touring car racing in the late 19 80s.  Reigning champion Carey McMahon has brought the last Benson & Hedges Sierra out of hibernation to challenge the ANZ Moffat Eggenberger car of Duncan McKellar, winner of this event least year.  Also running fuel injected, turbo power is a Volvo 240, the same model that won the ATCC in 1986.
Five-litre V8 power will be in abundance, with four Holden Commodores taking on the high-tech turbo cars and flying the flag for red-blooded Aussie fans. Wayne Clift will be racing the Deluxe Coachlines VK Commodore he ran at the 1987 Bathurst 1000.  Wayne built the car from a HDT supplied Holden motorsport shell in 1986 and has owned and raced the car ever since.
Two of the spectacular ‘Walkinshaw’ spec fuel injected VL Commodores are to make their first appearance at Morgan Park and will be something to see and hear.  Gunnedah’s Greg Keam has recently completed an immaculate restoration of the Ford Mustang which holds the extraordinary honour of having taken part in Australia’s first and last Group A Touring Car races.  The nimble car and experienced rally driver are expected to shine on the challenging, twisty Morgan Park layout.
Competition should also be strong in the Group A under 3-litre class.  Outright series leader David Towe and his JPS BMW M3 had a dominant weekend in round one at last month’s Phillip Island Classic, but he will face a strong challenge from the Schnitzer M3 Evo resplendent in its Japanese Championship Asahi livery, after a full rebuild by the team at Bowden’s Own.  Another car new to the event is a JPS BMW 325i which is expected to challenge the former Peter Williamson Toyota Supra, now based in nearby Toowoomba.
Back in the day, the under 2-litre class of Group A was dominated by Toyota’s giant-killing 16v Twin Cam Corollas and it’s no different today.  An ex-Bob Holden Corolla Sprinter will be fighting two of his ex-TOM’s GB Corolla FX-GTs, one to be driven by 1966 Bathurst 500 winner Holden himself.  The only time the Toyotas were beaten in the baby class was in 1987, when Mark Skaife won the title in the Gibson Motorsport Peter Jackson Nissan Gazelle.  Current owner Brian Henderson will be expecting a repeat performance.
Group C outright honours will be hotly contested by ‘Elvis’, the ex-Allan Grice/Colin Bond STP Roadways Commodore, the famous Army Reserve XD Falcon and two of the fast, nimble and loud, rotary powered Mazda RX-7 sports cars, both of which have won the Heritage Touring Car series Group C championship in recent years.
Group C under 2-litre honours will see a classic Holden vs. Ford battle in miniature with two ex-Bob Holden Ford Escorts keenly chased by a pair of rare Japanese PF60 Geminis.
Group C cars are deeply loved by Australian race fans, but not all of them are remembered for their speed.  A classic example was the stock standard Volvo 242GT raced at Bathurst in 1979 by Scuderia Veloce.  The car was driven by two retired greats, but lacked the speed of the highly developed big bangers.  Still, it finished the biggest race in the country and got plenty of airtime.  Well, that very car now lives in Queensland and will be racing in group C this weekend.
Round one of the Championship was held at the prestigious Philip Island Classic in March and round three will be at the great Sydney Retro Speedfest at Sydney Motorsport Park in June.  After that the cars travel to Winton in August, then on to Sydney’s Muscle Car Masters in October for the final round of 2016.
Entry to the pits at Morgan Park is free of charge, so if nearby don’t miss your chance to get up close and check out Australia’s motor sport heritage, in the metal!
Group A Touring Cars Heritage Touring Cars Championship Group C Morgan Park Raceway