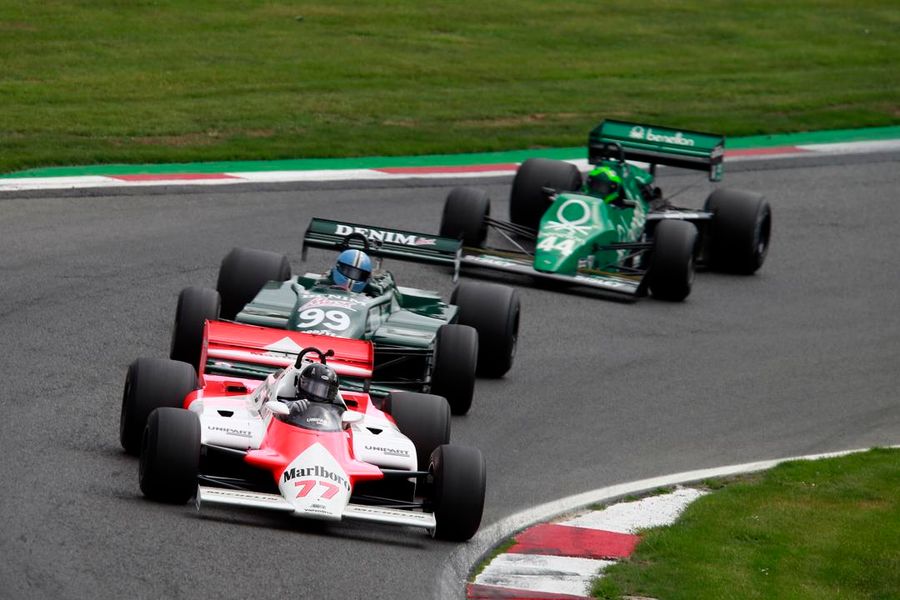 Martin Stretton prevailed in a tense first FIA Masters Historic Formula One race at Brands Hatch, the Tyrrell 012 driver keeping young guns Michael Lyons (Williams FW07B) and Matteo Ferrer-Aza (Ligier JS11/15) at bay the whole race. The next day, Stretton was ready to attack surprise leader Steve Hartley who drove a brilliant race in his McLaren MP4/1 but the deployment of the safety car five minutes from the end secured Hartley’s first win in several years. Phil Hall (Theodore TR1) took Saturday’s pre-78 class win but Henry Fletcher recovered to win the class on Sunday, his March 761 having been forced into retirement in the first race.

A chaotic FIA Masters Historic Sports Car race was resolved in favour of Robert Beebee and Martin O’Connell, their Lola T70 Mk3B passing early leader Henry Fletcher’s Chevron B26 for the win, in a race punctuated by three safety-car periods and redflagged with five minutes still to go. The Keith Ahlers/Billy Bellinger Cooper Monaco King Cobra looked to have won the pre-66 class but when Ahlers was penalised for overtaking under the safety car, the win was handed to Chris Jolly and Steve Farthing, despite their Cooper Monaco T61M coasting to a halt short of fuel just before the race was cut short by the red flag.

In their Shelby Cobra Daytona Coupé, Julian Thomas and Calum Lockie repeated their Masters Gentlemen Drivers win at Paul Ricard to make it two out of two. Rob Fenn and Jake Hill finished second to win the CLP class in their Lotus Elan, while Andrew Smith (in the Jaguar E-type shared with Mark Donnor) beat the Tom Ingram/Marco Attard Corvette to third in a photofinish across the line…

The next day, Fenn and Hill went on to claim the Masters Pre-66 Touring Car race in their Ford Mustang, Hill taking the lead from Mark Sumpter’s Cortina after a great fight following after the pitstops. Tom Bell and Joe Ferguson starred in the Mini class, doubling up from their win at Paul Ricard.

The Gentlemen Drivers and Pre-66 Touring cars will be back out at Donington Park in two weeks’ time, June 8th/9th, joined by a non-Championship Masters Historic Sports Car race and the special 60-minute SU Carburettors Masters Pre-66 Mini race. Three weeks later, we will be at Magny-Cours, June 28th/30th, for the French Historic Grand Prix with all the five main Masters grids. Meanwhile in the US, Masters Historic Formula One and Masters Endurance Legends will be in action at Sonoma this weekend.

Don't forget to check out our bumper galleries from the Master  HistoricFestival!