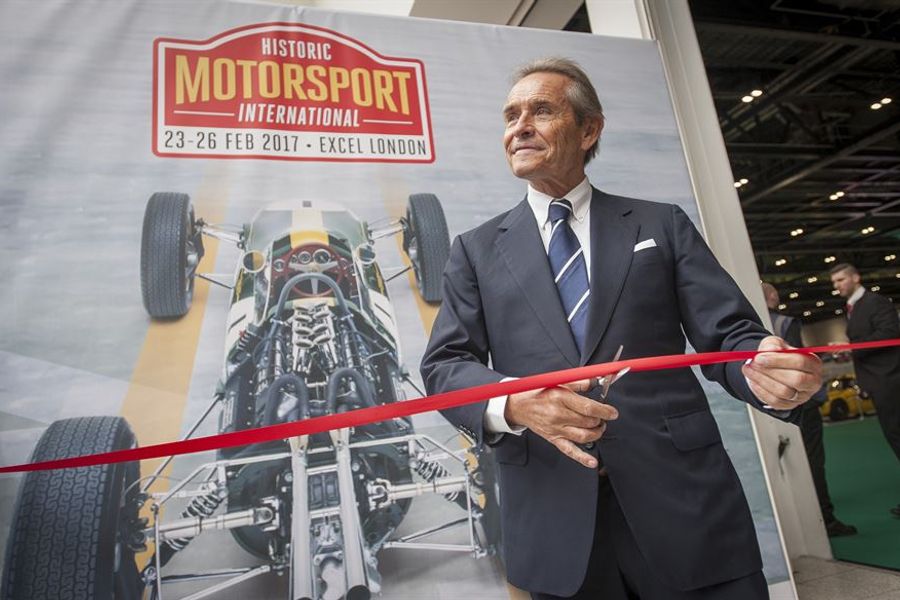 Le Mans legend Jack Ickx, officially opened the inaugural Historic Motorsport International today. The ExCeL, London, event reflects the UK’s leading role in the world of historic motor racing and rallying. The show, which runs until 5pm on Sunday (26th February), is aimed at competitor and enthusiast alike with stands from preparation experts, event organisers and dealers with competition cars for sale.
Ickx not only won Le Mans six times, but also claimed eight Grand Prix victories for Ferrari and Brabham as well as winning the European Formula 2 title, the Can-Am crown and the tough Paris-Dakar Rally in a career spanning four decades.
He said: “It is a genuine thrill to be here and to open this wonderful show. It is especially good to be among like-minded people with a passion for historic motorsport and classic cars. We all come from different backgrounds, different countries, different jobs, but we all have a love for the sport in common.”
Ickx was not the only motor sporting hero at the show. No fewer than four other Le Mans victors – Derek Bell, Jürgen Barth, Jackie Oliver and Emanuele Pirro – were interviewed at the show’s Supagard Theatre on the opening day. They were joined by other famous faces including former F1 driver Martin Donnelly and Nick Padmore, the reigning FIA Historic F1 champion.
Among the other highlights at the show are a display celebrating 50-years for the famous Ford DFV Grand Prix engine while the Silverstone Classic, the world’s biggest festival of classic motorsport, has a major presence with a number of iconic cars on display beneath a huge screen showing highlights from the 2016 event.
The Silverstone Classic has also brought the Scarf and Goggles pub to ExCeL allowing visitors to enjoy a pint while lapping up the high-octane atmosphere.
There are also stands with leading race and event organisers, race and rally preparation experts, parts and equipment manufacturers and dealers with cars for sale. Visitors can buy anything from a 1976 F1 McLaren M23, as raced by James Hunt, to books and period posters and photographs of their heroes.
As well as interviews with star guests, the two-day HMI 2017 Conference in the Supagard Theatre includes other leading names from the sport – drivers, event organisers, engineers, scrutineers – discussing important topics that affect the sport today.
“It’s been a hugely exciting day. Historic Motorsport International has certainly made its mark on the sport, attracting a knowledgeable and enthusiastic audience and I am delighted to confirm that we are already making plans for the 2018 show,” said Show Director Ian France.
“The second Historic Motorsport International is set for 15-18 February and we have already managed to secure more space. It promises to be even bigger and better than the inaugural show.”
Historic Motorsport International F1 London Formula One HMI