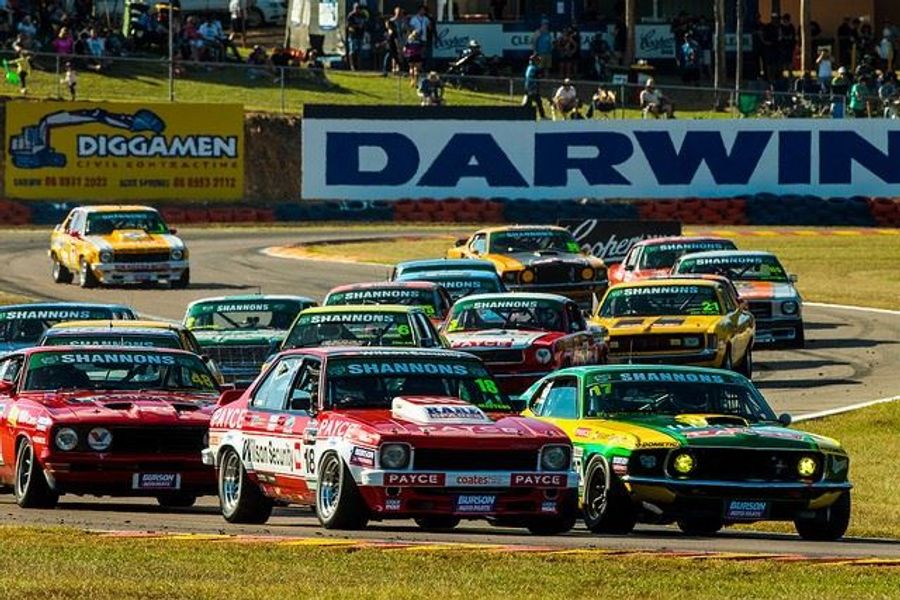 With his championship challenge back on track thanks to a storming victory at Hidden Valley Raceway, Queensland’s own Steven Johnson will aim to continue his climb up the Touring Car Masters ladder on home bitumen this weekend as the circuit visits Queensland Raceway near Willowbank.  A tough start to the season saw Johnson languishing down the points table following the opening round in Adelaide, however solid points at Winton and a race and round victory last time out at Darwin has the Queenslander closing on the championship lead as the title race reaches its half way point.

It was the first ever round win for the still young Team Johnson outfit, which has been between rounds preparing the car from a Queensland base – with the assistance of both Dick Johnson and Steven’s uncle, Dave ‘Dyno’ Johnson. Aiding his hopes this weekend will be the fact that Johnson and Mustang ‘Sally’ have already tasted success at the 3.1km Ipswich circuit – winning all three races and the round at the circuit in 2015.

Johnson is one of five different winners from the eight races (race two at Winton was not classified as a race) contested to date this year; joining Bowe, Brad Tilley, Adam Garwood and Greg Garwood on the winners list.  Meanwhile, three different drivers have won the three rounds so far; Bowe winning in Adelaide with Abelnica (Winton) and Johnson (Darwin) also leaping to the top of the podium.

The Queensland Raceway field offers plenty of names capable of adding to that list, including several Holden Torana drivers close to a major breakthrough in TCM.

Queenslander Jason Gomersall qualified second and raced to finishes of second, third and third in the three races in Ipswich twelve months ago, and also featured in the top three at Darwin following a post-Winton rebuild of his BigMate Racing A9X hatchback. ACDelco Racing’s Bruce Williams finished third overall at the last round thanks to several strong performances from his ever-improving Torana, while Ryan Hansford has been another contender and raced at the front in the Top End despite enduring power steering issues for a majority of the weekend.

Adam Garwood is another likely contender after continual improvement aboard his Torana – including a second career win at Winton in May this year. The ever-consistent Melbourne’s Cheapest Cars XB Falcon hardtop of Eddie Abelnica is expected to be another frontrunner: the Melbournian having raced into the top three in races at both Winton and Darwin recently.

Consistency has seen Whiteline Racing’s Adam Bressington secure top spot in both the ProAm class and the overall TCM point score so far this year – though less than 100 points cover the top six drivers after the first three rounds.

Though yet to win a race outright or a round this year, Bressington has two podium finishes from three rounds so far and his Fabre / Whiteline Racing Camaro is expected to be especially strong on the circuits that make up the second half of the season.

After rushing to prepare the car in time for Hidden Valley, Mark King will return to their loaned HQ Monaro GTS 350 this weekend on the other side of the Whiteline garage, as repairs to his regular Chevrolet Camaro continue at the team’s Adelaide base. King is one of 12 Queensland Drivers on the grid this weekend – making up 50 per cent of the grid.

The annual trip to Queensland has again drawn out several local runners from the TransAm Series, including Shannon O’Brien - the nephew of racing legend Charlie O’Brien. O’Brien and his Pontiac TransAm has won 11 of 14 races in the local series to date this season and enjoys a comfortable lead in their series standings.

TransAm frontrunner Brett Curran will also make a TCM return this weekend in his Ford Mustang Fastback, while fellow local Geoff Fane will race his 1970 Mustang. Queenslander David Falvey is another addition to the QR grid, adding a second A9X hatchback to the pack of Torana’s for round four.

Absent will be former TCM champion Jim Richards, who will miss this round due to overseas commitments at the Silverstone classic event in the UK, though fellow member of the Australian motorsport ‘legends club’ Rusty French will return in his Skye Sands Mustang.

2017 marks the sixth visit to Queensland Raceway for the Touring Car Masters Series, John Bowe winning last time out in his Holden Torana.

The TCM field will tackle three races at the Coates Hire Ipswich Supersprint event this weekend.