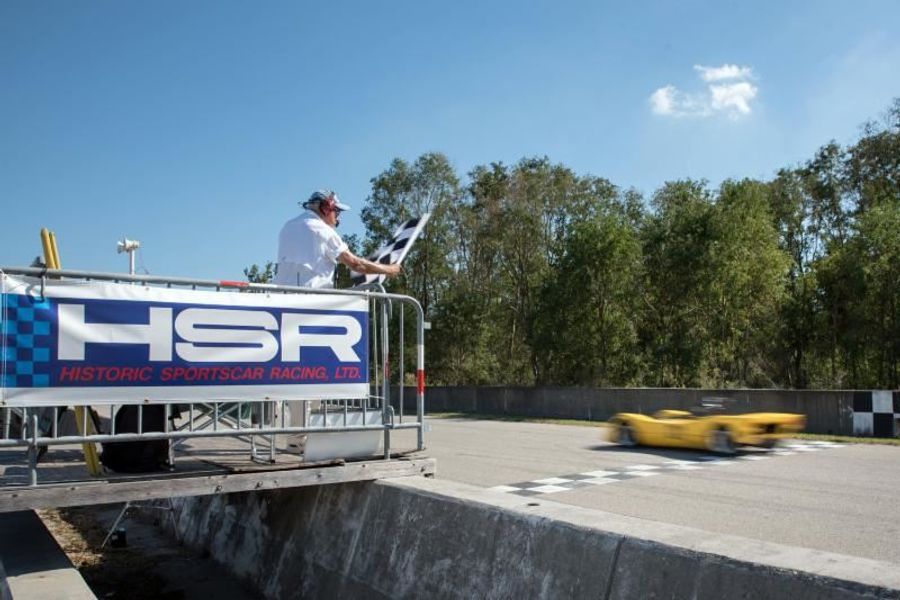 The Historic Sportscar Racing (HSR) Savannah Speed Classic presented by Mingledorff's saw its second-straight day of perfect weather and outstanding on-track competition Saturday on the Grand Prize Circuit on Hutchinson Island. The day’s featured one-hour B.R.M. Vintage Enduro Classic was won overall by legendary rock-and-roller and equally accomplished historic sports car racing driver Brian Johnson.
Johnson scored his victory after an impressive solo run in the one-hour race in his 1970 No. 21 Royale RP4 prepared by Heritage Motorsports. Second place in the B.R.M. Enduro went to Jeff Mitchell in the 1974 No. 41 BMW 2002 while Danny Burnstein and Kevin Wheeler drove the 1970 No. 76 Porsche 914/6 to a third-place showing for KMW Motorsports.
Jacek Mucha doubled-up on WeatherTech Sprint victories, taking Group 6 and Group 4 wins in addition to overall honours in both races in his nearly identical Swift JMS-016Ps.
In the combined Group 6, 8 and 9 WeatherTech race, Mucha shared the podium with Group 9 winner Richard Howe, who also finished second-overall in the 1989 No. 19 Whistler Ford Mustang from Soenen Motorsports. Reese Cox was third overall in the 2006 No. 98 Chevrolet Corvette C6R while Brian Norman won Group 8 and crossed the line fourth overall in his 2006 No. 9 Dodge Charger. Mucha's podium partners in the combined Group 4 and 7 WeatherTech sprint included second-place finisher Jim Dixon in the 2000 No. 69 Star Pro Mazda and third-place Michael Snowdon 1972 No. 86 GRD 272.
John Harrold won Group 4 with a fourth-place overall finish in his Team Mean 1979 No. 94 Chevron B23/33 that races out of the KMW Motorsports tent in the paddock. The win was the second of the Savannah weekend for Harrold after taking Historic-class honors in Friday's B.R.M. Historic/Prototype Enduro.
Catesby Jones also went two-for-two on the weekend so far with a Group 5 WeatherTech Sprint victory in his 1974 No. 19 Porsche 911 IROC. Jones scored the overall and International-class win Friday in the Bob Woodman Tire International/American Challenge race, sharing the podium with runner-up Stuart Milne and third-place finisher Mike Banz. The same trio filled the podium after Saturday's Group 5 race, but this time Banz took runner-up honors in his 1974 No. 13 Porsche 911 RSR prepared by Heritage Motorsports. Milne was third Saturday in the 901 Shop 1973 No. 11 Porsche 911 RSR.
The WeatherTech Group 10 race went to Jonathon Ziegelman in his black-and-white, zebra-striped 2008 No. 911 Porsche 997 GT3 Cup prepared by KMW Motorsports. Ziegelman shared the podium with twin brothers Hamilton Harris and Hunter Harris who drive identical 2011 Lotus Exige-S race cars. Hamilton finished second in the No. 86 Lotus and Hunter was third in the No. 61 Exige-S.
The Group 2 WeatherTech sprint was a flag-to-flag win for Josip Baltic in the 1975 No. 45 Volkswagen Rabbit. Second-place went to William Thumel in his 1959 No. 136 Elva Courier with Jim Smith taking third in his 1962 No. 62 Lotus Super 7.
A full field of Group 3 competitors wrapped up Saturday's schedule as the sun was getting low over the Grand Prize circuit. The victory was earned by Sean Brown in the B-G Racing 1975 No. 85 Ford Escort RS, crossing the line ahead of Ralph Thomas in his 1980 No. 163 Mallock Mk 17b. Johnson capped a great Saturday with his second podium of the day, finishing third in the Group 3 closer in his Royale.
Sunday's schedule begins with the third and final B.R.M. Enduro Challenge of the weekend, a one-hour race for GT Classic (GTC) and GT Modern (GTM) race cars at 9 a.m. EDT. The second and final round of WeatherTech sprints begin at 10:10 a.m. and will be followed later in the afternoon by the weekend's feature races for the HSR Global GT series and the HSR Classic RS Cup.
Ziegelman will be racing in Global GT to defend his championship lead against a season-high field of more than 20 competitors in race cars from seven different manufacturers. Banz is leading the RS Cup championship standings and will no doubt continue to battle with Jones and Milne as he has all weekend in the RS Cup race.
Royale Historic Sportscar Racing HSR Johnson Savannah