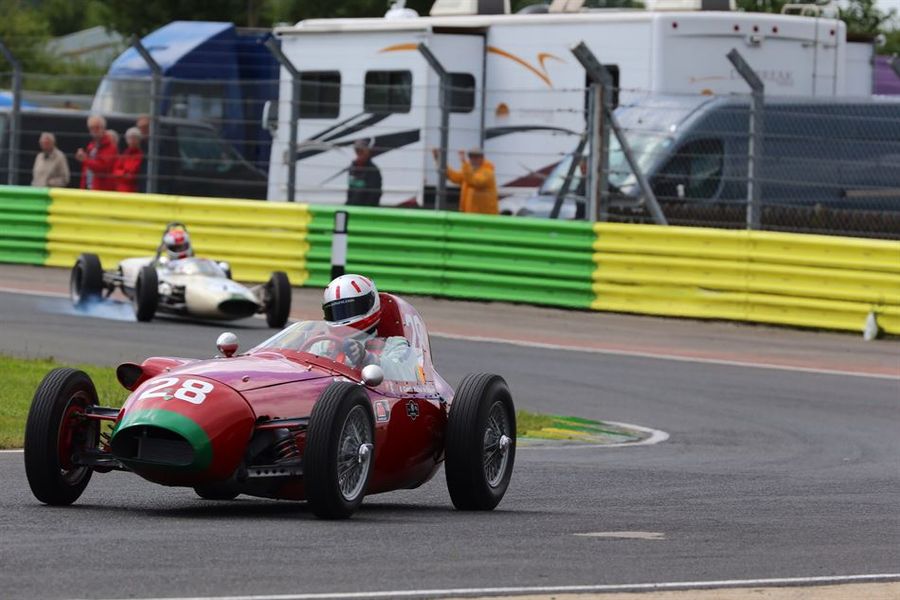 Today delivered a second dose of sublime racing action at the Croft Nostalgia Weekend with on-and-off-track entertainment, from classic car collections to Routemaster buses, period live music, circuit parades, military processions, a spectacular firing display, aerial aerobatics and a through-the-decades fashion show. As spectators and competitors emerged bleary-eyed following a rousing dinner-dance on Saturday evening, and as the sun put in a welcome appearance, the drivers prepared to take to the grid – watched over by Chris Meek, one of the starters in the inaugural 1964 Daily Mirror Trophy Meeting, 50 years ago to the day, and circuit founder Bruce Ropner. Saturday’s pace-setting Mini Coopers initially duelled for the lead again in Sunday’s Historic Touring Cars race, before the Ford Lotus Cortinas and Warren Briggs’ menacing Mustang powered to the front of the field. Tim Davies broke clear in his Lotus Cortina – a tyre-smoking lock-up through the Complex notwithstanding – whilst Briggs muscled his way through to collect the runner-up laurels. Mike Gardiner’s Lotus Cortina wound up third after the similar car of Mark Jones was forced into retirement – albeit not before posting fastest lap – whilst AC/DC’s Brian Johnson made it two top ten finishes in as many races, hustling his Mini Cooper to eighth overall and class victory. And he clearly had a ball along the way. “I absolutely loved the Croft Nostalgia Weekend,” Johnson enthused. “I just wish it had gone on for longer! I think I got to drive in pretty much all conditions, from blazing sunshine to rain of near-biblical proportions! It’s a tricky, fast and fabulous circuit and I’m still learning it now! I’m pleased as punch to have come away with a trophy too. “The racing was fantastic. I think the drivers here must get fed on raw meat before they go out – they certainly don’t go easy on newcomers! I saw some of the best driving I’ve ever seen. There was one Mustang that went past me completely sideways – I would have applauded but I would probably have gone off the track! There were little Hillman Imps like buzzing hornets – and I love these Minis!" Mark Charteris was a runaway winner in the day’s first Classic Clubmans encounter in his Mallock Mk20/21, lapping everybody up to fifth place by the time the chequered flag flew. What was initially a three-way tussle for supremacy was broken when John Harrison peeled off into the pits with a damaged nosecone on his Mallock Mk21, after which defending champion Charteris edged clear of runner-up Mark Hales in the race’s sole Centaur 14. Alan Cook claimed the final podium spot with his Mallock Mk20. Charteris made it two-from-two later on, with Harrison following home a distant second to make up for his earlier misfortune and Hales completing the rostrum trio in third. A slow getaway for pole-sitter and Saturday winner John Pringle in his Lotus Seven S4 enabled Oliver Ford’s Lotus Europa to vault into an immediate lead in Historic Road Sports / ‘70s Road Sports. A mid-race red flag for an accident halted proceedings awhile, and upon the resumption of action, the recovering Pringle set about hunting Ford down – a role-reversal of the previous day’s chase. On a charge and relentlessly closing in, Pringle flashed across the finish line less than three-quarters-of-a-second in arrears – an almost identical deficit to Saturday’s race, albeit the other way round. This time, Ford prevailed, with Julian Barter taking third in his TVR 3000M. Dean Forward replicated his day one success in the weekend’s second Historic Formula 3 outing, sprinting clear of his pursuers in his Tecno F3 single-seater as Simon Armer in a March 703 and Vesey Ford driver Keith Messer overhauled Paul Waine’s De Sanctis F3 69 to join the race-winner on the rostrum. Jonathan Milicevic similarly doubled up in Historic Formula Junior in his Cooper T59, but only after early leader Jack Woodhouse spun his Lotus 20/22, surrendering his advantage in the process. He hung on to salvage second, ahead of the Lightning-Envoyette of Peter Morton. Callum Grant upheld the prevailing theme of back-to-back triumphs by again dominating the Historic Formula Ford encounter in his Merlyn Mk20A. William Nuthall’s Jamun T2 narrowly defeated the Elden Mk8 of James Buckton for the runner-up spoils, as Saturday stand-out Benn Simms ended his race prematurely with his Jomo JMR 7 buried uncharacteristically in the Clervaux tyre wall. Historic Formula Ford 2000 honours once more went the way of Andrew Park and his Reynard SF81, with Simms atoning for his earlier disappointment by piloting his Royale RP30 to second place, just half-a-second ahead of fellow race one podium-finisher Tom Smith in a Royale RP27. The weekend’s competitive finale, meanwhile, witnessed a three-way scrap for supremacy, as Roy Hunt in the Martin 500 pipped John Turner’s Cooper Mk9 and the Cooper MkXII of Darrell Woods to glory in a thrilling 500cc Formula 3 showdown – a fitting manner in which to conclude a magnificent event. Full results from today’s racing at Croft Nostalgia Weekend can be found by selecting ‘HSCC’ and then ‘Croft’ at: http://results.mstworld.com/Results#