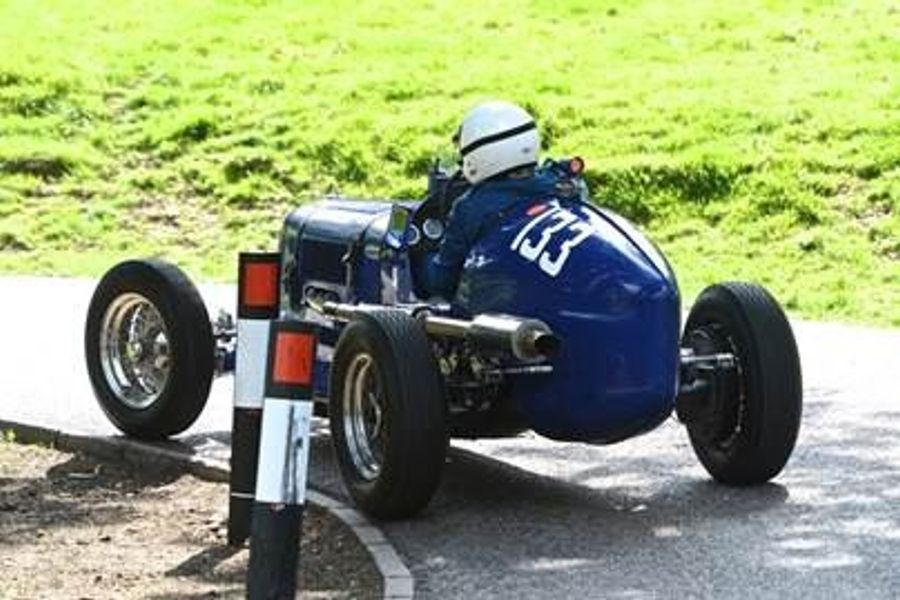 Photo: Terry Crabb in ERA R12C at Wiscombe (Mike Archer).
The Vintage Sports-Car Club’s second annual MSA-registered Speed Championship began in style with Curborough Speed Trials and Wiscombe Park Hill Climb events on consecutive weekends this month.
Comprising ten of the club’s Sprint and Hill Climb events throughout the season, the opening of round of the year took place at the long-standing Curborough Speed Trials on Sunday 30th April at the home of the Shenstone and District Car Club, near Lichfield in Staffordshire. First held in 1964, the Speed Trials have been a feature of the club’s calendar for over half a century and are always one of the most popular events of the year, attracting yet another full entry of over 100-Edwardian, Vintage and Post-Vintage Thoroughbred Racing and Sports-Cars, representing over 30-pre-war marques.
The welcome springtime conditions for the Bank Holiday event saw a strong turnout of spectators, many equipped with the conventional picnics, who enjoyed another exciting day of Vintage motoring and the ever-relaxed atmosphere of the paddock.
In a repeat of last year’s triumph, Tom Walker claimed ‘Fastest Time of Day’ once more with a time of 36.56 seconds in his imperious Hispano aero-engined Amilcar Special, ahead of the Frazer Nash Norris Special of perennial challenger, Julian Grimwade (Fastest Pre-war) and the 2016 Speed Championship winner, Tony Lees in the ex-Ron Footitt AC/GN ‘Cognac’ (Fastest Vintage).
Hot on the heels of the front-running racing machinery, the ever-competitive GN/Ford ‘Piglet’ of Longstone Tyres chief, Dougal Cawley topped the Sports-Car standings with an impressive sub-40 seconds run whilst James Crabb was the inaugural recipient of the day’s new ‘Fastest Young Driver’ award, sharing his father, Terry’s revered ERA R12C, the latter claiming the class victory.
Despite piloting the day’s oldest machine, Andrew Howe-Davies led the half dozen-strong Edwardian Class in the 1913 Scat Racer, whilst there were also class wins for Peter Howat (Austin), Joanna Collins (Riley), Jo Blakeney-Edwards (Frazer Nash), Marcus Black (Talbot Lago), Kevin Morton (Riley), Christopher Downham (Riley) and Jon Mellor (AC/GN) amongst the Sports-Cars, with Carl Gray’s Hardy Special the fastest of the small capacity cars.
The following weekend saw another impressive line-up of over 100 Pre-war and Historic Racing and Sports-Cars from such celebrated manufacturers as Alfa Romeo, Alvis, Bugatti, Cooper, ERA, Frazer Nash, MG, Riley and many more descend upon the idyllic grounds of Wiscombe House near Honiton in Devon, home to the Chichester family since 1953, for the Club’s ever-popular first hill climb of the year on Sunday 7th of May.
Continuing his fine start to the season, Dorset-based Terry Crabb took a dominant ‘FTD’ victory with a best time of 47.94 seconds in R12C in front of the biggest audience in recent years at his local event, who was joined in the ERA ranks by the improving Julian Wilton, winner of the preceding day’s 500 OA Hill Climb in R7B. Alastair Dent proved Crabb’s closest challenger on the day, winner of the Invited Post-war class in his 1948/55 Hornet F3.
In the absence of some of the leading racing class contenders, Greg Lerigo took an astounding third place overall and fastest sports-car accolade in his Riley Special, ahead of another surprise performance by the Type 51 Bugatti of Edmund Burgess, with a welcome return to top form for Sue Darbyshire in her Morgan Three Wheeler, claiming the fastest vintage spoils.
James Topliss was winner of the day’s ‘Fastest Young Driver’ award, trailing father and Club Director, Nick for class victory by a mere half second, as they shared the GN Gnome, whilst there was also class success for club resident Geoff Smith on his first outing in his Frazer Nash Super Sports since 2015, and past resident Roger Collings, Edwardian Class winner in his 1903 Mercedes 60HP.
As always, there were thrilling contests throughout the classes as competitors looked to accrue all-important points towards the annual standings, with Sports-Car class winners also including Stuart Rose (Austin), Jeremy Flann (Austin), John Fack (Railton), David Furnell (Austin) and Guy O’Beirne (Alvis) and Gary Clare the best of the small capacity Racing Cars in ‘Grannie’.
The next round takes place on the weekend of 27th/28th of May with the Club’s Loton Park Hill Climb in Shropshire.