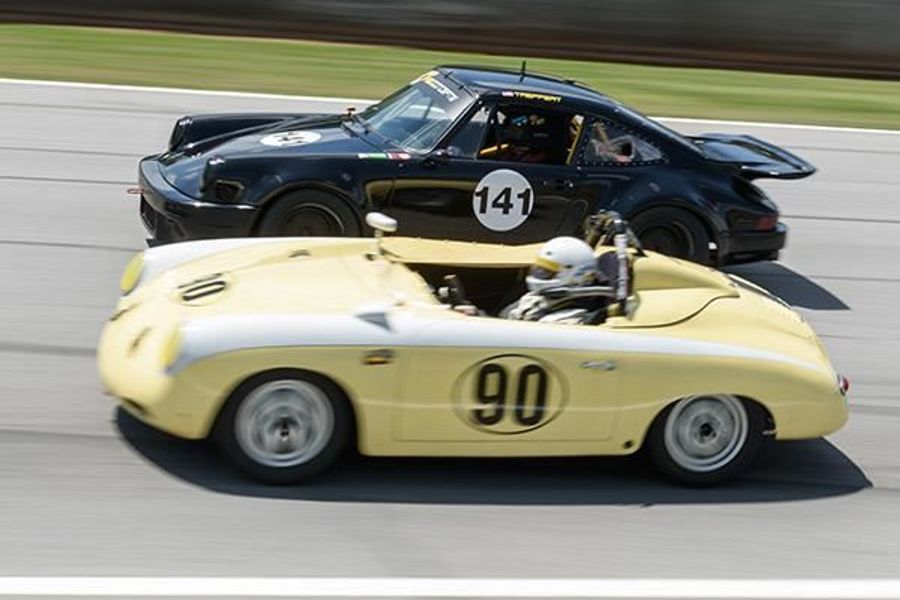 Todd Treffert and Alex Welch each scored a victory in Saturday's Classic Porsche Feature races at the 40th Classic Motorsports Mitty presented by Hagerty and sanctioned by HSR, while Steve Scullen and his professional coach and co-driver Gunnar Jeannette capped a perfect day of racing at Road Atlanta with an overall victory in the one-hour B.R.M. Chronographes Historic/Prototype and GT enduro.
In a spectacular and high-speed tribute to Porsche - the Featured Marque of the 40th Classic Motorsports Mitty - the highlight of Saturday's schedule was the twin feature races that drew a combined total of 75 Porsches of all types and from all generations.
The first feature race was for Porsches no older than 1974 models that saw a huge field of 54 competitors take the green flag. Treffert started from the pole in his SpeedConcepts 1974 No. 141 Porsche 911 IROC and stayed up front for the entire race for a convincing victory.
Despite dealing with lapped traffic for more than half the race, Treffert led the 1974 No. 13 Porsche 911 RSR of Mike Banz across the finish line by a comfortable 7.351 seconds. Third place went to Banz's Heritage Motorsports teammate Yves Scemama in his 1974 No. 52 Porsche 911.
The second feature race was for Porsches from 1975 to the present, and all but six of the race's 21 entries were 996 and 997 GT3 Cup cars. Welch took the win in his 2012 No. 8 Porsche 997 RSR prepared by Redbeard Race Support and shared the podium with the similar No. 44 ex-Flying Lizard RSR driven by Josh Simpson. Les Long was third in his Air Power Racing 2007 No. 496 Porsche 997 GT3 Cup.
The B.R.M. Enduro - the first of three one-hour races this weekend - ended Saturday's schedule on a high-note with Scullen and Jeannette co-driving Scullen's potent 2007 No. 5 Lola B07/18 LMP1 car to the overall win.
The winner's strongest challenge came from John Reisman in the Hudson Historics-prepared 2010 No. 33 Corvette Daytona Prototype, which still carries its original red-and-white Whelen Engineering graphics. Reisman soloed to a second-place finish while the father-and-son team of Patrick Bean and Toby Bean finished third in their immaculate 1991 No. 64 Chevy Intrepid GTP.
Welch doubled-up on Saturday wins with a B.R.M. Enduro GT-class victory, which boosted his weekend tally of wins to an event-leading three victories. He also won Friday's HSR Global GT race.  Simpson once again finished second to Welch in his Flying Lizard Porsche while Andrea Robertson put in a great drive to snag the final podium spot in her popular 2006 No. 040 Ford GT Mk 7.
Saturday also had a full slate of first-round WeatherTech Sprint races for all 10 Run Groups competing this weekend at the 40th Classic Motorsports Mitty.
Overall Run Group winners included reigning HSR Global GT Champion Jonathon Ziegelman in his KMW Motorsports-prepared No. 29 Porsche GT3 Cup car (Group 10), Richard Howe in his 1989 No. 19 "Whistler" Ford Mustang T/A (Group 9) and Jack Finch, who topped the Stock Car class in the 2002 No. 22 "CAT" Dodge Charger (Group 8).
Mark Brannon edged the Group 4 open-wheel class with a win in a 1997 No. 7 Lola T97/20 Indy Lights car, Andre Herke topped Group 2 in his 1968 No. 16 BMW 2002 and Craig Chima prevailed in a crowded Group 3 race for the victory.
Chima's win was earned in his iconic 1962 No. 15 Lotus Super 7, one of racing's timeless treasures that was the second oldest car in the stacked 52-car Group 3 field.
Recent University of Georgia graduate Theo Bean, 23, took the Group 6 win in a 1988 No. 83 Nissan GTP ZX-T, one of the all-conquering Electramotive race cars that earned one of its many IMSA Camel GTP victories at Road Atlanta 29-years ago this month.
Another young race winner was 17-year-old Spencer Brockman who took Group 11 honours and the overall win in a combined sprint with Group 7. Brockman drove the Steve Durst-built 2003 No. 196 Ball Brothers Special powered by a two-rotor Mazda 13B engine. The Group 7 win went to the Team Mean/KMW Motorsports 1979 No. 94 Chevron B23/36 driven by John Harrold.
The Group 5 WeatherTech sprint turned out to be the ultimate historic GT battle with a 1969 Corvette Coupe, 1970 Mustang Boss 302 and 1973 Porsche 911 IROC filling the top-three spots.
Jody O'Donnell scored the Group 5 win - his second of The Mitty after an overall and class victory in Friday's Bob Woodman Tire International/American Challenge race - in his No. 46 Corvette. Curt Vogt took runner-up honours in his Cobra Automotive No. 23 Mustang, and Fritz Seidel was third in his IROC Porsche from Ecurie Engineering.
The 40th Classic Motorsports Mitty presented by Hagerty concludes today with a full schedule of two more one-hour B.R.M. Enduros and the second round of WeatherTech sprint races.