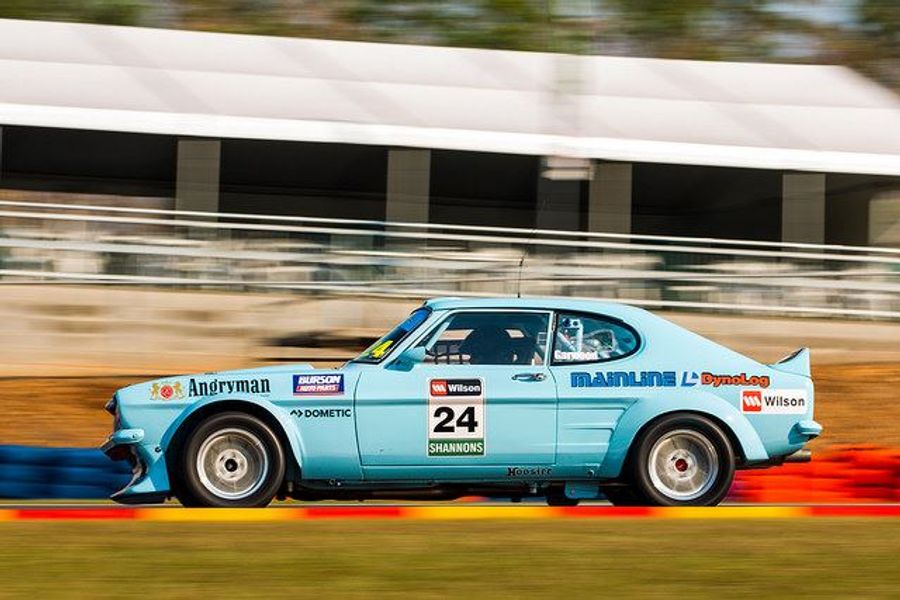 Usually the son follows in the father’s footsteps – but it’s turning out to be the other way around in the 2017 Touring Car Masters series, this weekend in Hidden Valley. Greg Garwood raced to victory in today’s Waeco / Dometic TCM Trophy race in Darwin, just four weeks after his teenage son Adam won at Winton Raceway in his Holden Torana.
The Tasmanian driver started from the second row in the reverse-grid affair but wasted no time powering his way to the front, passing the Shannons Insurance Falcon Sprint of Jim Richards for the lead on lap two to never be headed from there.
Not only was it Garwood’s first win the series, it was also the first ever win for the Ford Capri Perana in Touring Car Masters.
Garwood won by nearly three seconds, with Richards a comfortable second and Cameron Mason a very strong third in the Hercules Engines ‘66 Ford Mustang. It was busy behind the leaders though with furious battles throughout the field across the 10-lap distance.
Adam Garwood made it a strong day for his family by finishing fourth, just holding out Eddie Abelnica in a close race to the line between the Torana and Falcon GT. Abelnica started near the rear of the field but had moved to 11th by the end of the first lap and solidly worked his way through the field to end up fifth at the finish.
Bruce Williams was another to storm though the field, ultimately finishing sixth after being involved in several race-long battles throughout the field. Leo Tobin banked his best race result of season with seventh in the THD Motorsport Ford Mustang, beating home Jason Gomersall, Steven Johnson and Ryan Hansford.
Johnson started last by virtue of qualifying on pole in the earlier 20-minute session, but climbed into the top ten on the last lap. Hansford’s 10th place came despite no power steering aboard his Multispares Torana.
The Queenslander had his power steering fail in practice yesterday and endured the same problem in qualifying on Saturday morning – meaning he got a workout in the hot conditions during today’s race.
The highest profile – and only – non finisher of the otherwise clean trophy race was ProMaster championship leader John Bowe. Starting second-last, Bowe made a conservative start but a plume of smoke from the car on the opening lap saw him out of contention early.
The team later diagnosed the issue as a broken transmission with the team to replace it before the first of tomorrow’s two races.
Qualifying on Saturday morning set the grid for the first of two races on Sunday, with Steven Johnson racing to pole position in the WM Waste Ford Mustang – the first pole for Team Johnson and the fifth of his TCM career.
His pole time of 1m12.4161s was the second fastest ever for TCM at Hidden Valley, despite scorching conditions today.
Bowe qualified second and Adam Bressington a strong third in the Whiteline Racing Camaro.
Jason Gomersall, Eddie Abelnica, Bruce Williams, Andrew Fisher, Tony Karanfilovski, Adam Garwood and Jim Richards completed the top-10.
Two races complete the round tomorrow at Hidden Valley, the first at 10:25am and the finale’ following the Supercars Championship race, at 4:00pm local time.