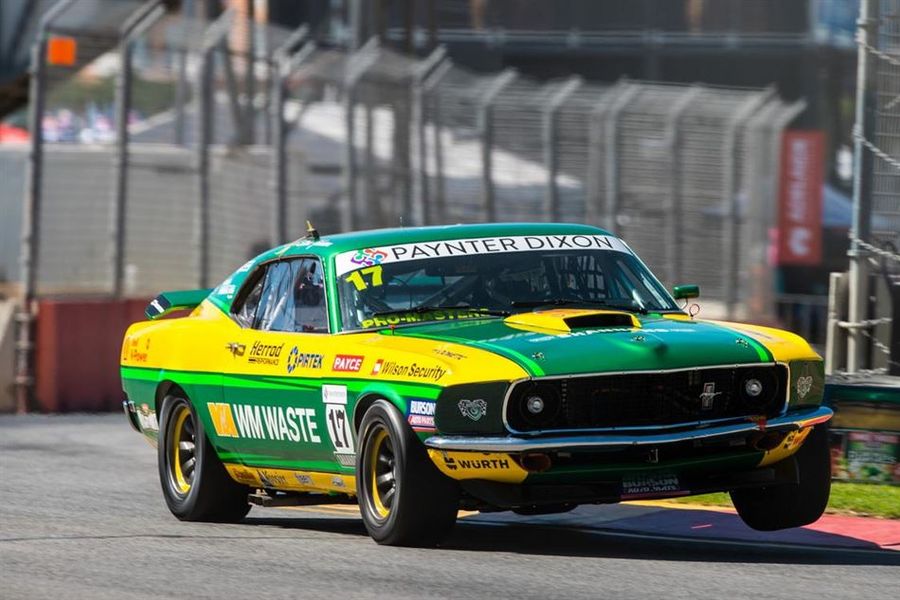 The more things change, the more they stay the same – at least it seems so in the Paynter Dixon Touring Car Masters series. Despite a new race format, new major sponsor plus a host of new names and cars in the field, race one of the 2018 series was a replay of the way 2017 ended with defending champion Steve Johnson leading home John Bowe and Adam Bressington in a close 10-lap dash.

The race only served to underscore the highly anticipated season ahead following last year’s closest ever TCM title battle. The Team Johnson Mustang led every lap, building a 1.5-second lead early and then managing the gap to conserve tyres for the remainder – ultimately edging Bowe home by less than car length at the finish.

Bressington was third while Tony Karanfilovski and Bruce Williams completed the top five.

Gavin Bullas starred early, starting second and surviving a wild ride through the Senna chicane on the opening lap to hold on to the spot. The Victorian driver’s strong qualifying performance was something of a milestone for the former two-time series champion; qualifying alongside the sister Mustang that was originally built for Drew Marget back in the early days of TCM – now driven by Johnson.

He then set about defending from Bowe and Bressington in a competitive fight for second third and fourth, only to run wide at turn eleven on lap eight – glancing the tyre barrier and damaging the steering on his Ford Mustang. He ultimately limped home in 16th position but was classified a finisher to ensure a better starting spot for race two tomorrow.

Though the battle was highly competitive at the front, the race was not without drama. Jim Pollicina ran strongly early in his Torana before dropping back through the field with suspected power steering problems – ultimately finishing 14th.

Ryan Hansford only made it past the start before his SL/R 5000 broke, a driveline issue seeing him out of the race before it really began. Nigel Benson was another with dramas, his Holden Monaro stopping on the formation lap – reportedly jammed in gear.

Mark King only made one lap before his Whiteline Racing Camaro pulled to a halt up an escape road; a shame for the Queenslander following a strong performance in the Trophy race on Thursday.

Allan Boughen failed to take to the track after his Century Batteries Mercury Comet broke a rocker yesterday – the team working overnight to rectify the issue though ultimately unable to take the starter today. Cameron Mason was another to not make the green flag – his Ford Mustang dropping a valve in the Trophy race on Thursday, ruling them out for the remainder of the weekend.

The second series race will be contested over 10 laps at 12:45pm tomorrow afternoon at the Adelaide 500, and will be shown live on FOX Sports 506.