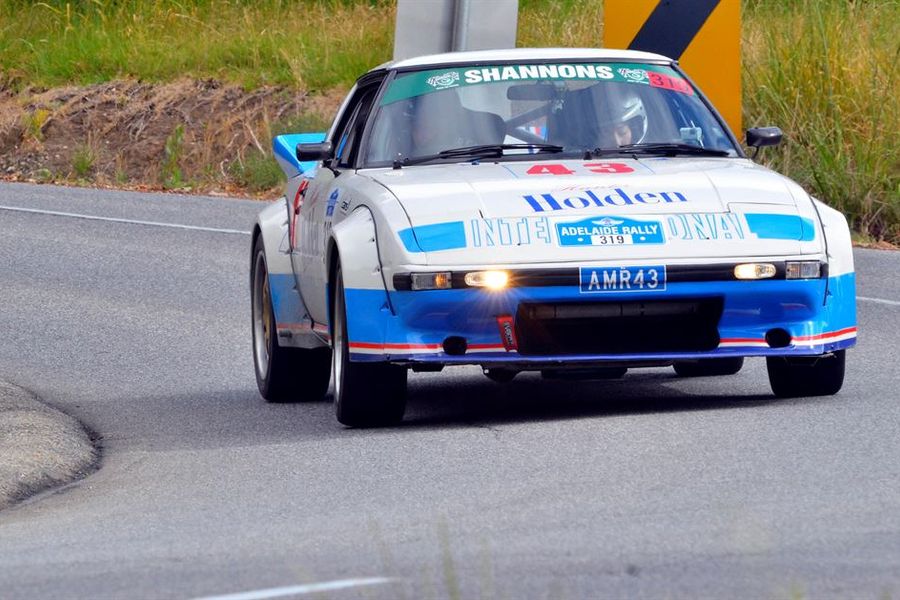 Adam Kaplan and Aleshia Penney lead the Shannons Adelaide Rally Classic Competition class overnight, following a highly competitive first day of competition in the Adelaide Hills.  Kaplan and co-driver Penney hold a 28.6-second lead over Matt Selley and Hamish Mckendrick’s Hartage BMW, with Oscar Matthews and Darren Masters (Toyota Corolla) in third place amongst a closely-matched classic field.
Following ten competitive stages, the top-five cars in the premier Classic Competition class are covered by less than one minute: with the short, sharp stages in the Adelaide Hills ensuring one mistake would drop competitors a long way down the order.
Meanwhile, four-time Australian Rally Champion Neal Bates and Coral Taylor fought a titanic battle with Ben Calder and Steve Glenney for the lead in Modern Competition, the pair split by just seconds all day. Nick Streckeisen leads Category S in his Nissan GTR.
Though 22km of today’s 236km road trip was ‘competitive’ – i.e. held on closed-road stages - the competition was fierce on some of the best roads in the state.
The morning started with the Stone Hut, Paracombe and Gorge Road stages in the North-Eastern Adelaide Hills, before heading to the Barossa Valley for two runs up the classic Collingrove Hillclimb.  Kaplan charged to an early lead in their Allan Moffat-inspired Mazda RX-7, winning the first three stages of the rally and edging out a 11-second lead over the Simon Gunson / Jurgen Lunsmann Ford Capri by the lunch break at Deviation Road winery.
Matt Selley – a regular in the event – and his co-driver Hamish McKendrick sat third in their Hartage BMW however were less than 20 seconds behind the leaders.
Kaplan then extended his lead by winning SS6 (Millbrook) and SS7 (Kangaroo Creek) to extend his lead to 17-seconds as the field commenced their run back to Adelaide.  He swept the final three trials of the day to take his streak to eight of ten stage wins from a productive day.
Simon Gunson and Jurgen Lunsmann sit fourth in their Mk1 Ford Escort, while David Mcdonough and Dave Langfield are fifth in a Ford Capri Perana, just 58 seconds from the leaders.
In Modern Competition, Four-time Australian Rally Champion Neil Bates and co-driver Coral Taylor won the first six straight stages in their ex-ARC Toyota Celica.
However, their margin at the lunch break was just 7.3 seconds over the Ben Calder / Steve Glenney Mitsubishi Lancer Evolution – showcasing the close competition in the rally this year. The Blaise / Rachel Paris Porsche 964 sat third at the lunch break, just 12 seconds behind Bates.
Things swung around after lunch, however, as the Calder / Glenney Mitsubishi upped the pressure with the pair actually tying stage 7, the run up Norton Summit.
In Category S, a seemingly miss-matched battle between the Streckeisen Nissan GTR and Frank Kelly’s Ford Escort still resulted in close competition throughout the day. The pair are split by just six seconds heading into tomorrow’s stages.
The Perkins / Brabbins Subaru STI leads the Modern Challenge competition by just 13 seconds, while the Ephgrave / Beeston Porsche leads Classic Challenge by 25 seconds.
Friday’s running will see a further eight competitive stages contested, commencing with two blasts around Mallala Motorsport Park in Adelaide’s North.  The cars then return to the Northern Adelaide hills with a blast through Anstey’s Hill and the iconic Chain of Ponds and Corkscrew stages prior to lunch.
Second runs through Anstey’s, Chain of Ponds and Corkscrew then complete the day after lunch before the field descends on Gouger Street in the evening for the annual street party.
While the Shannons Adelaide Rally field will proceed straight to Gouger Street, 16 classic Formula 1, Touring Car, GT and Supercars – and Troy Bayliss on a Superbike – will drive from the Adelaide Motorsport Festival precinct to Gouger Street at 5:45pm in the annual ‘Peak Hour of Power’ through Adelaide’s CBD.