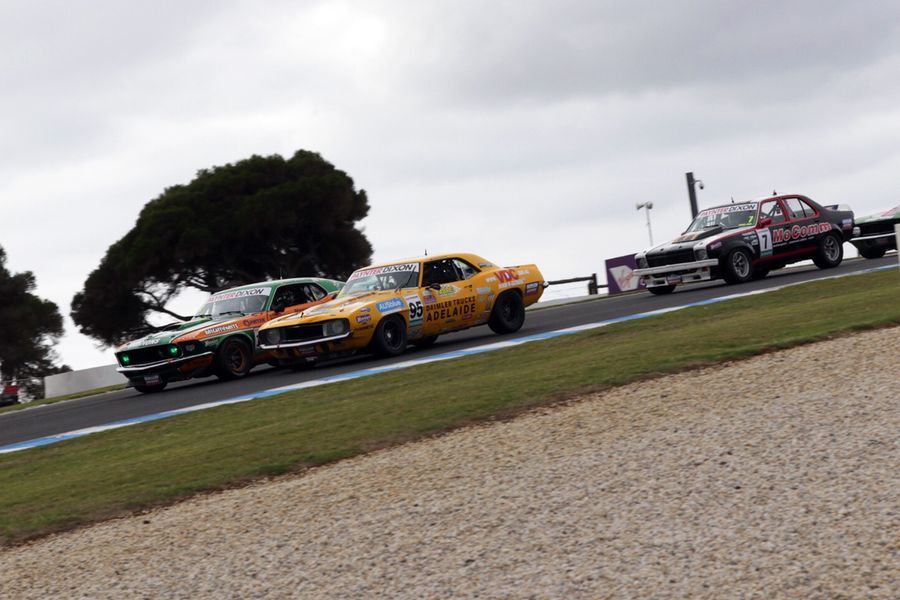 Race four in the series went safety car on the opening lap when Rob Hackwood crashed his Pontiac Trans Am between turns two and three. The damage to the tyre barrier meant that the race was red flagged shortly afterwards.

At the start of race five, Johnson and Randle ran side-by-side to turn one where the latter grabbed the lead. At the beginning of lap two Johnson took the front running and a lap later it was back to Randle. Then Randle had a right front tyre let go and he was out.

“I had a better run off turn twelve at the end of lap one and was able to slip past, and then he did it to me on the next lap,” Johnson said.

“We ran alongside each other into turn one at the start and he was on the less grippier side of the track which gave me the advantage,” explained Randle

Third placed Ryan Hansford and his Holden Torana A9X ran off at turn one with a fuel regulator failure, just before Geoff Emery (A9X) came unglued at turn eight, tagged Tony Karanfilovski (Mustang) at the next corner, and left Bruce Williams (Torana SL/R 5000) nowhere to go. The Mustang had no drive and the safety car was deployed.

Bressington was second by this stage and when the race went green, bolted away leaving a stunned Johnson to chase him down. Two laps from the end Johnson pulled off a thrilling around-the-outside move at turn eight to take the lead into turn nine and lead to the end.

“I thought the rule was that the race leader controlled the restart and thought he would be penalised,” said Johnson.

Bressington believed the rule with double file restarts was that once the green flag was shown, racing resumed, and there was no-one in front of him.

“Running side-by-side with Steve late in the race showed that good drivers can go two wide and not touch and even though we didn’t win, it was great racing and very enjoyable,” Bressington said.

Third place went to Ryal Harris (Camaro) ahead of John Bowe (A9X). Jim Pollicina (A9X) was third for a period until he spun off on oil left at the Hayshed. His team mate Emery crossed the line fifth but was penalised 10 seconds post-race for a starting infringement. The penalty moved Cameron Mason (Mustang) to sixth and first in Pro Am behind the Pro Masters five ahead.

“The car was really good once we overcame the handling issues. We avoided some incidents and had a great result,” Mason said.

Next was Cameron Tilley (Valiant Pacer) and second in class, ahead of Williams and Al Boughen (Mercury Comet) in his best result. It also meant a victory in Pro Sports.

“It has been a long time coming after all the troubles we had at round one and we have never been this far up the field. It is an awesome result for us,” Boughen said.

The Paynter Dixon Touring Car Masters will complete the second round tomorrow with race six scheduled for 12:05 pm.