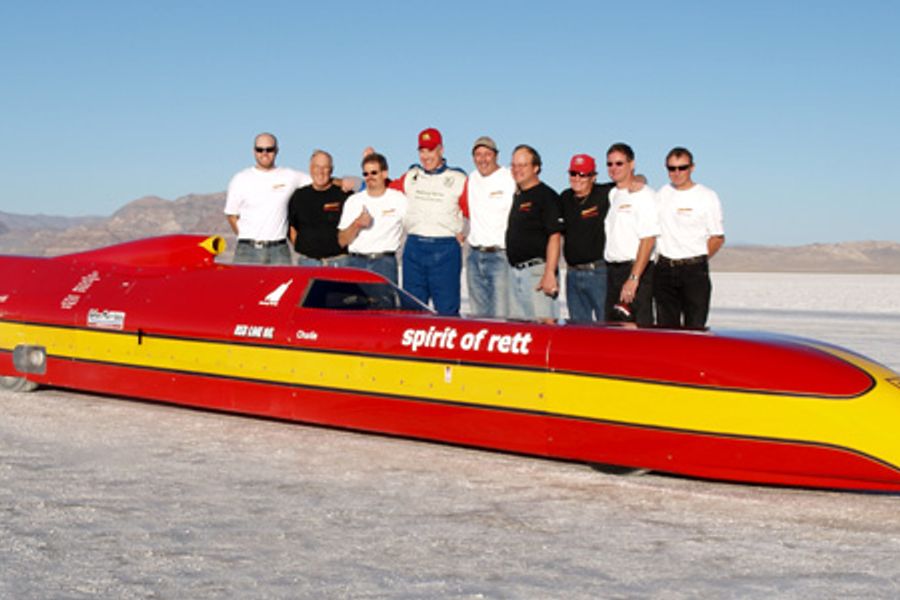 Charles Nearburg has been a valued and successful racer in Masterss Historic Racing - who we would like to thank for their help in bringing you this interview - and also a record setter at the Bonneville salt flats. in 2011 he set a piston-powered, wheel drive record of 414mph in his car ’Spirit of Rett’, named in memory of his son.

Q. What was your best day in motor racing?
Probably my first professional podium. That came on the Mile Oval at Nazareth in the Bosch Super Vee championship. I finished second that day in a really challenging race. And, of course, setting the big FIA Land Speed Record in 2011 at Bonneville was epic. The record we broke had been on the books for 45 years! The Spirit of Rett Streamliner still holds the fastest FIA normally aspirated record in history at 414mph, with a top speed of 422mph.

Q. And your worst?
A Player’s Toyota Atlantic Championship test day on the Phoenix International Speedway one-mile oval in a Swift DB4. I was trading fastest time all day with Jimmy Vasser and then, as I was told later, I hit the wall in Turn 2 at about 160mph and was helicoptered to the hospital. I woke up the next morning wondering where the hell I was… I didn’t break anything, but the Swift’s supertough kevlar aluminium honeycomb tub was fully broken. I was so sore all over that I could barely move for three days and had to stay close to the hospital in Phoenix.

THE SWITCH TO HISTORIC RACING…
In 1997 Charles raced in The 24 Hours of Le Mans. With a passion for racing and special cars, Charles now races a collection of endurance and single seater racing cars – you'll only see the truest racing icons in his collection!

Q. You’ve raced at Le Mans, in Champ Cars and in Toyota Atlantic, and also set a land speed record ten years ago. How did the switch to historic racing come about?
I didn’t have the time or desire to do a full series anymore, but I still wanted to go racing. I’ve always had a huge appreciation of the history of motorsports, and it’s a great opportunity to race the cars you grew up with and always dreamed of racing.

Q. Can you remember your first-ever Masters event?
Before Ron bought that US series I did quite a lot of successful racing with Historic Grand Prix with my ex-Alan Jones Williams FW07B. In Europe I had a March 761B and I think it was a Masters European meeting in 2011. We had an engine problem in the March 761, so I wasn’t even able to finish the second practice session. Not fun! It was balanced out by a podium in my Lola T212 sports car though!

"I GOT TO WORK WITH RON TAURANAC…"
Born in Dallas, Nearburg founded Nearburg Exploration, an oil and gas exploration firm as well as enjoying a successful auto racing career where he became a long time Toyota Atlantic competitor and even worked with Ron Tauranac, the co-founder of Brabham!

Q. Are you in it to win it – or is the win just a bonus to the fun?
Oh, I like to win races! I’ve won races on both sides of the ‘Pond’. I’ve had a second, a third, and two fourths at Monaco in three different historic formula one classes. Having fun and feeling like I have driven well are important to me. There are situations now where I temper my aggressiveness. I saw Clay Regazzoni get paralysed in his crash at Long Beach, so I know how fragile these cars are.

Q. Best car you ever drove?
That’s probably my Ralt RT40 Toyota Atlantic car. I got to work with Ron Tauranac in developing the car for Ralt America. Ron measured me before he designed the tub so that my 6’3” body was actually comfortable; quite a change from the DB4. He was tough, but I learned a lot being around him as we tested the car. That was a great experience.

Having raced around the world and experienced some of the most famous racing circuits, Charles tells us more about his favourites below. No doubt, there will be some new ones added on to this year's racing schedule!

Q. Your favourite circuit?
I cannot name just one. In the States – Laguna Seca and Circuit Of The Americas. In the UK and Europe it is the Brands Hatch GP circuit and Mugello.

Q. Why doesn’t Masters go to…?
Mugello for sure! And in the States maybe the Mid-Ohio Sports Car Course – that’s a really great circuit.

Q. You bought the car that Nick Padmore used to win the 2018 FIA Masters Historic Formula One Championship. What’s it like to drive a title-winning machine?
Obviously, it is a really well set up car. My first weekend in it I had a good run in the second race at Paul Ricard. I took the car back to the States to drive it at COTA last November and will race it in the States next year. The plan is to come back to the UK in 2021 and race it there in Europe.