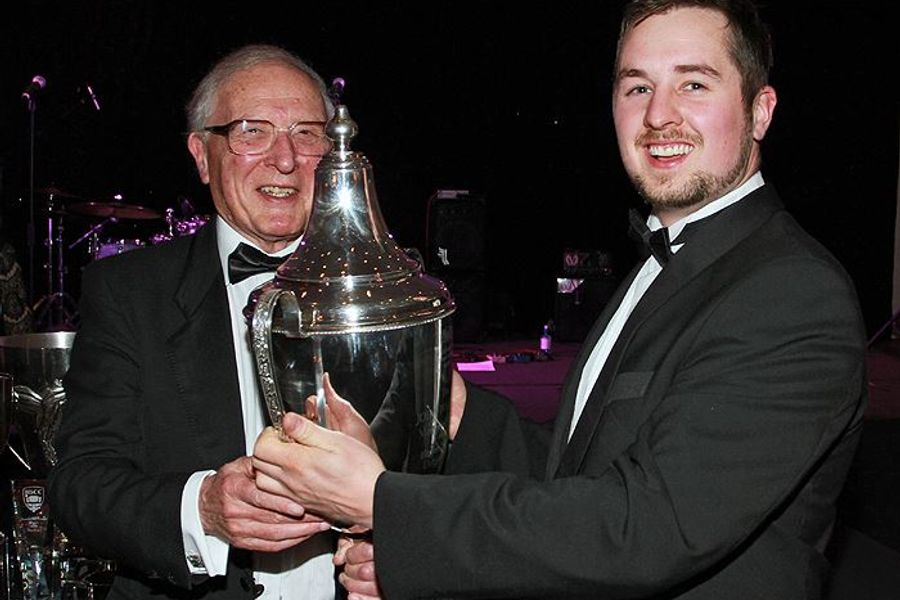 Picture: Andrew Park (right) receives the Foulston Award from Stuart Turner
The Historic Sports Car Club’s annual Dinner Dance and Awards Presentation (Saturday 19th of November) was the final major event of the Club’s 50th anniversary season. Over 260-members and guests gathered at the Whittlebury Hall near Silverstone to celebrate the winners from an outstanding season of racing. To mark the close of the Club’s 50th year, five drivers were present who competed in the inaugural Griffiths Formula race at Castle Combe in 1966.
Chris Drake, John Le Sage, Francis Mockridge, Geoff Thomas and Bernard Worth were all guests for the dinner and Worth started the evening in style by expertly piping the guests in to dinner.
After a welcome from master of ceremonies Marcus Pye and HSCC Chairman Frank Lyons, Stuart Turner was the guest speaker and kept the audience very well entertained. Turner closed his superb speech with a message from the Club’s Patron-in-Chief, Sir Stirling Moss OBE.
The message from Sir Stirling read: “Whoever knew back in the 1960s that historic racing would grow into such an important and successful part of our sport. Without the likes of the HSCC I don’t think this would have happened. It is great to see how our Club has developed and flourished over the last 50 years. I wish you all a great evening and here’s to the next 50 years!”
Grahame White, the Club’s Chief Executive Officer, was honoured with a ‘this is your life’, expertly presented by Marcus Pye. White then received a standing ovation in recognition of his central role in building the HSCC into Britain’s leading race-organising club for historic racing. A second standing ovation was given to the HSCC office team of Alan Jones, Carrie Bedford, Donna Skipworth-Mitchell and Emma Jemmett.
Along with end-of-season awards for the Club’s 16-championships and race series, a number of special awards were also presented. Formula Ford 2000 champion Andrew Park won the John Foulston award for the greatest number of race wins and Historic Formula Ford racer Benn Tilley won the Monson Award for the best newcomer. Mike Gardiner and Dan Cox took the Guards 1000 Trophy for coming so close to the overall title and Chris Alford won the Lion Trophy for his Formula Junior campaign.
Special achievement awards included one for Tom White for ending the season with a race win in his rare Osella in Historic Formula Ford 2000 and for former Club accountant Anthony Goddard on his retirement from racing.
HSCC Awards