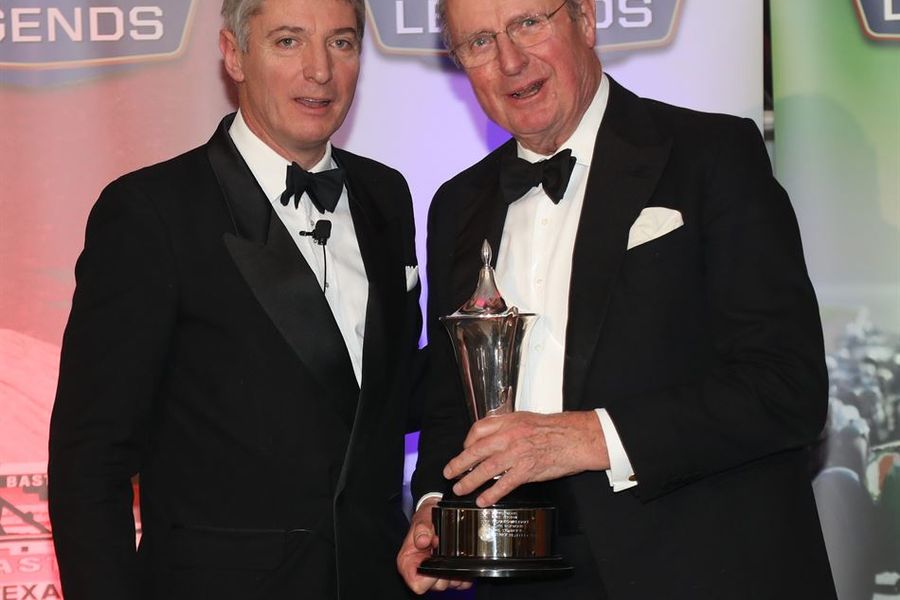 Photo: Duncan Wiltshire presents Tim Keown with the Motor Racing Legends Trophy (Peter de Rousset-Hall)
On Wednesday night Motor Racing Legends celebrated last year’s winners and announced a new certification programme for verifying engine capacities for the Historic Touring Car Challenge at their annual awards dinner.
The evening was hosted by MRL Chairman, Duncan Wiltshire and held at The Royal Automobile Club in Pall Mall. Duncan made several announcements during the evening’s presentation; confirming a return to Silverstone Classic for the Kidston Trophy for Pre-War Sports Cars; introducing a new 2-hour race for the Historic Touring Car Challenge competitors at the Algarve, as well as crowning last year’s series winners.
The Historic Touring Car Challenge has enjoyed a year of success with record high grid numbers following last year’s revised entry criteria. The already popular HTCC series now caters for Group A Touring Cars right up to December 1990.  Competitors attending the annual dinner also learnt of the introduction of a new 2-hour race with fuel stops to be hosted on the challenging Algarve switch-back circuit at the end of the season. (October 27-29)
Wiltshire also announced a new certification system to be introduced in 2017, requiring engines to be inspected, measured and sealed to effectively stamp out the risk of engines being over-powered by bore and stroke. Those cars inspected and sealed will be recognised within the results.
Duncan said, “The introduction of this certification programme is a major initiative in the battle to control over-development of engines in the Historic racing world. We will be applying the certification scheme across our Touring Car and 50s Sports Car series”. The announcement has been welcomed by competitors keen to see an end to over-sized engines.
Back for 2017, the Kidston Trophy for Pre-War Sports Cars is an endurance race run at the Silverstone Classic in honour of Glen Kidston – First World War hero and fabled ‘Bentley Boy’ who in 1930 went on to win Le Mans 24hrs with Woolf Barnato in a Bentley Speed Six.  The first running of the Kidston Trophy really caught the imagination of competitors and owners who filled the grid with an exceptional entry of 55 cars representing 17 different pre-War manufacturers.
The night’s awards ceremony celebrated all the 2016 trophy winners. Highlights include Tony Wood and Will Nuthall (Lister Jaguar Knobbly) who raised the famous Stirling Moss Trophy, won by Moss for his first ever British Grand Prix win in 1955 at Aintree. Fred Wakeman and Patrick Blakeney-Edwards (Cooper Jaguar T38) took home the Royal Automobile Club Woodcote Trophy for the second year in a row, and Sam Stretton (Alta Sports) walked away with the Motor Racing Legends Pre-War Sports Car Trophy.
Current reigning BTCC Champion Gordon Shedden presented the awards for the Historic Touring Car Challenge where Richard Postins (Rover SD1) picked up the overall prize for his seasons performance and father and son team Oliver and Grahame Bryant (Chevrolet Camaro) won the inaugural presentation of the Tony Dron Trophy - the Tricentrol Cup, the actual Trophy Tony Dron won at the Tricentrol British Saloon Car Championship support race at the British Grand Prix in 1977.
Tim Keown won the Motor Racing Legends Trophy, a fitting tribute as this is the tenth anniversary of the Woodcote Trophy and Tim was instrumental in the origination of the series as Royal Automobile Club Chairman 10 years ago.
Chris, Beverley and Oliver Phillips were awarded the Traditional Oak Family Spirit Trophy and Ken Clarke Motorsport took home the Preparers Trophy for their regular impressive assembly of Touring Cars and it was Richard Kent who picked up ‘The Brian Lister Cup’ presented by Lawrence Whittaker, the CEO of Lister for the best overall performance by a Lister in 2016.
MRL Wiltshire Engine Certification Motor Racing Legends