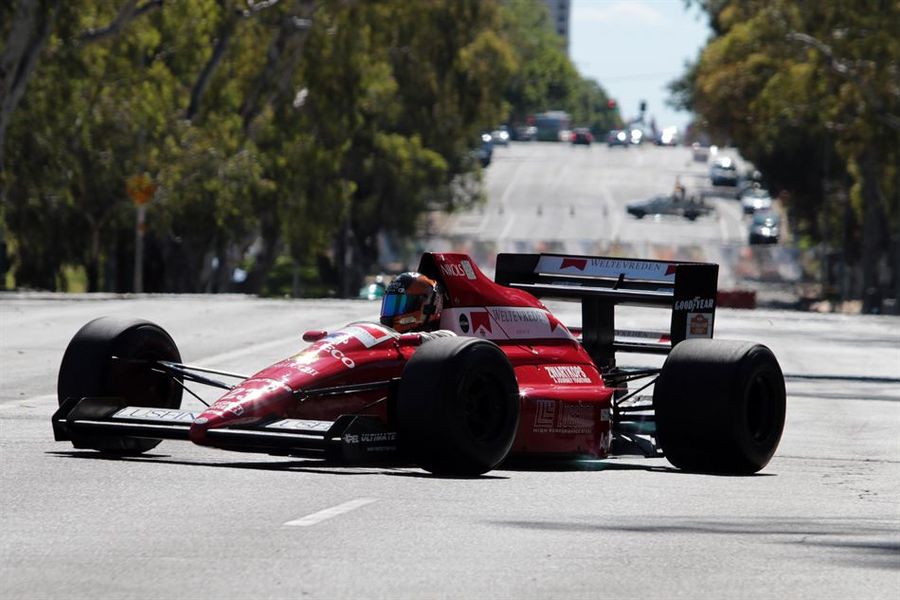 Motorsport and motoring fans from Adelaide, Australia and even around the world gathered at the Adelaide Motorsport Festival this weekend. While approximately 30,000 attended the event, competitors from interstate and even overseas tackled both the Victoria Park Sprint and the Shannons Adelaide Rally across the four days.
“It has been a fantastic weekend and the event is going from strength to strength,” said Event Director Tim Possingham. “We shifted up last year and it’s gone into overdrive. The future is bright and we are already working on plans to make the whole event, from the rally to the sprint and our community based free events bigger and better next year.
“We feel like the event really has momentum now.”
The highlight of the weekend was again the array of classic Formula 1 machinery that returned to the circuit for two further sessions today. Having set the new Sprint circuit lap record (43.03s) yesterday, Tim Slade was forced to miss today’s running due to other commitments; giving his rivals an opportunity to challenge his overnight benchmark.
Slade’s Supercars rival Cameron Waters, driving the same Footwork Arrows FA15, came closest by setting a 43.96s best – coming to within 0.9s of the record but not quite topping it. Todd Hazelwood’s banner year continued, given the opportunity to jump into the Benetton B168 for this morning’s session. He also drove the new Super5000 prototype in a session later in the day.
South African Andre Bezeidenhout shipped his BMS Scuderia Dallara F189 Formula 1 car over for the event this weekend, one of eight Formula 1 cars participating in the event. He ultimately ended up 5th fastest of the Formula 1 contingent with a 45.96-second best lap for the weekend.
“The whole experience has been amazing,” Bezeidenhout said. “The chance to come over and drive the car at this location has been a great opportunity. I have been at a lot of this style of events around the world and this one is world class.”
Meanwhile, Adelaide-based Brenton Grigoul enjoyed his first run on the streets of Adelaide in his Lola Larrousse Formula 1 car from the 1988 season – like the Dallara, a car that competed in the Australian Grand Prix. Grigoul, who lives five minutes from the iconic Victoria Park circuit, said it was a dream come true return the car back to the circuit.
“The last time this car raced, it was here in 1989,” he explained. “Aside from about one lap at Mallala this was the first time I have driven it and it performed faultlessly.
“The car is so popular, and I have had people coming up to me with merchandise from the era that I haven’t been able to find online! It’s been a great experience.”
Joining the legendary F1 cars was a legendary Australian driver – John Bowe joining the festival today to drive a pair of classic cars. As well as driving the 1974 March Formula 1 Car, he was also reunited with the Dick Johnson Racing Shell Sierra he raced in the late 1980s.
A key feature of Sunday’s program was the Rally Legends demonstration, with a vast array of iconic rally machinery taking to the sprint circuit – many after completing the Shannons Adelaide Rally on Saturday evening. While all the cars – including some of the feared Group B monsters from the 1980s – were warmly received by fans, it was Irishman Frank Kelly who entertained the most by sliding his Mk 2 Ford Escort at every point of the circuit.
The competition in the Victoria Park Sprint categories continued to be extremely competitive. Lyndon Punshon topped the Sports Car class in his AC Cobra, while fellow Adelaidian Chris Smerdon was quickest in the 5-litre Heritage Touring Cars class in his AU Ford Falcon.