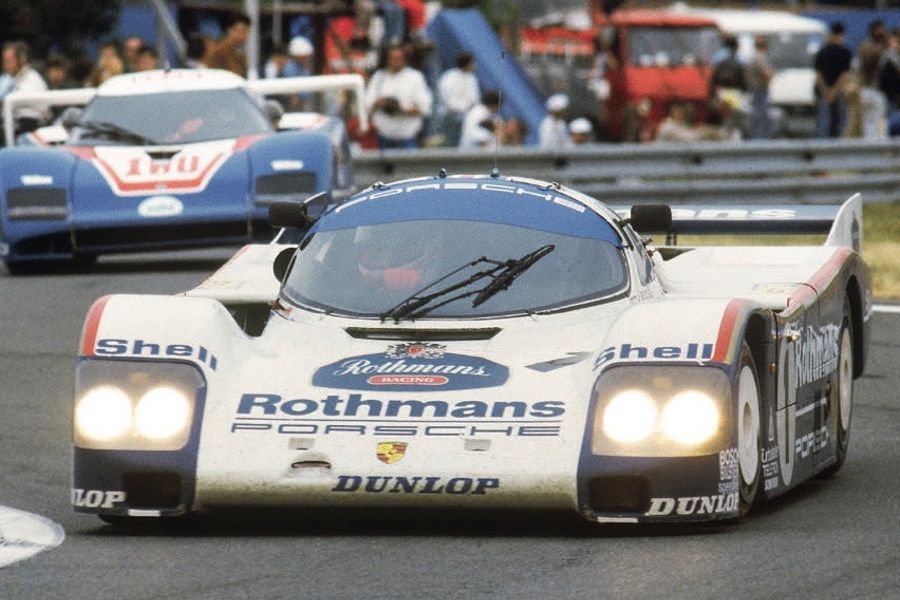 It was an advert in the local evening paper that started it all off, when I noticed a local coach company were doing a trip to Le Mans and one of the pick-up points was just a few hundred yards from where I was living. I persuaded a friend that this would be a fun weekend, and very soon we were curbside, bags in hand as a coach drew up early on the Friday evening and we started our trip to the 1986 Le Mans 24 Hours race.

It is worth mentioning at this point that neither of us were greatly into motorsport, although I would watch Formula One when it was on TV, so our knowledge of the race was pretty much limited to the logical conclusion that it would last for 24-hours. The fact the cars were running to Group C rules (other than one lone BMW M1, a scattering of cars, mostly Mazdas, running in the IMSA GTP class, and the oddity of the unliveried Porsche 961) was a total mystery to us, and it really was a trip into the unknown.

It was only a short run to Portsmouth and a late evening ferry, before an uncomfortable night trying to sleep on the floor. Back on the coach early the next morning, we stopped at a nondescript garage in a small town on the drive down to Le Mans, where we followed the lead of the more experienced travellers and queued up to buy our tickets.

The size of the event started to dawn on us as we arrived late morning at Le Mans and stopped in a huge coach park, and we set off into the circuit to wander at random for a few hours taking in the atmosphere. As start time approached we found a spot on the inside of the circuit on the exit of the old Esses, just before Tertre Rouge, with the funfair in the trees opposite.

Having bought a programme we decided to pick a car to follow each, my friend picked one of the Kouros-liveried Sauber C8s, while I was taken by the bright colour scheme of the number seven Porsche 956 from Joest Racing, totally oblivious to the fact that this was the car that had won the previous two years and was a serious challenger to the works Porsche 962Cs.

The start was a great moment, the field blasting past at full race speed, number seven already making its intentions clear as Klaus Ludwig dived past the works Rothmans cars on the first lap. We watched from there for a while, discovering that once every hour there was a few minutes of English commentary to keep us up to speed on what was going on in the race.

We decided to go for a walk and trekked our way back up past the Dunlop Curves and round the back of the paddock, until we ended up by a barrier where there was a camp site for the many Gendarmes to one side. Even after years of pondering I have no idea why, but the official on the barrier across the road leapt off his chair and opened it for us to walk through, and though we had no idea where we were, we kept walking down what seemed a country lane.

It was early evening and a nice walk, and even though we now couldn’t see any cars we could hear them from what seemed all sides, and coming to a junction decided to turn left as it seemed as good a direction as any. A lot more walking brought us to another manned barrier, and maybe thirty yards further up we could see marshals, Armco barriers and a flash of colour and sound as a car blasted by on the long run down to Mulsanne Corner.

Now, in retrospect, this is where it did get a bit weird, although in our naivety we thought nothing of it at the time. Yet again the marshal tasked with manning this barrier leapt to his feet and waved us through…and we found ourselves stood just behind a marshal’s post on the most famous straight in motorsport. Other than the fact I had a nice Canon camera slung round my neck and a poor grasp of French I have no idea how we deserved such a unique viewing position, but we soaked it all in.

If I had known then what I know now about circuit access etc. we would have just stayed there for most of the race, but after an hour or so we decided to head back towards the paddock area, a decision that may have been prompted by our growing hunger. A well-stuffed chicken baguette dealt with that, and as the night wore on we joined many others in settling down to try to rest, taking to our sleeping bags near the chapel on the inside of the hill down from the Dunlop Bridge.

Despite the race engines at full blast just a short distance away I managed to drop off to some sort of sleep, only to be woken quite soon by my left arm being suddenly yanked up in the air.

This was because I had tied the straps of my bag to my arm, and some ill-mannered cove was trying to relieve me of it. I have never been renowned for waking up quickly, so I said something like ‘That’s my bag!’ with a tone of indignation, only to receive a face full of pepper spray in return, my friend Jon getting a blast too just so he didn’t feel left out.

Our assailants left at some speed, and we were left with eyes streaming, struggling to breathw and less than impressed with the whole incident. Some nearby British fans were our saviours with the offer of water to rinse out our eyes, and we decided to retire to the coach to try to sleep.

After discovering that coach seats are not the best place to pass the night, we staggered out next morning to head back to the circuit picking our way through the tightly parked coaches. At which point a familiar aroma wafted past and we looked at each other – breakfast!

We quickly homed in on the source and found a British coach with a line of trestle tables down the side. You gave the gent at the door end a pound and he handed you a paper plate, which as you walked along the tables gained bacon, eggs, sausage, beans etc. until you had what was one of the most memorable breakfasts of my life, a combination of us being ridiculously hungry, barely having slept and also its sheer unexpectedness.

It was only when we reentered the circuit we became aware of what had happened in the race during the night and the harsh reality of the dangers inherent in motorsport hit home. The news that Jo Gartner had gone off in the Kremer Racing 962C and been killed as he accelerated onto the Mulsanne just after three in the morning came as a shock, and in a sombre mood we settled down to watch the rest of the race from opposite the pits.

The field was somewhat depleted by this stages, the best of the Saubers had only managed 86 laps, the TWR Jaguar team, in their first Le Mans, lost their last car around 8.30am on Sunday morning, and ‘my’ Joest 956 had succumbed to overheating during the lengthy safety car period in the night.

There was still plenty to watch, I recall watching one of the Group C2 cars trying to get away from a stop with apparently no working clutch (may have been the Bardon?), the crew even trying to get the car back on track by dropping it off the jacks with the engine already running and rear wheels spinning.

As the factory Porsche 962C of Derek Bell, Hans Stuck and Al Hobert took the flag we saw lots of people jumping down from the wall in front of the pit straight tribunes into the gap between that wall and the trackside one, so we joined them – why not? – only for the door in the circuit wall to be opened by yet another helpful French official who grabbed my arm and launched me trackside.

Fortunately, I was not alone as many thousands seemed to have achieved the same feat, and as we milled about I ended up stood next to the C2 winning Gebhardt of the ADA team and even helped push it a few yards. We enjoyed the podium celebrations then returned to the coach, and I spent part of the trip back to the ferry port having to draw on a map of the circuit the route we had used to get out onto the straight to a disgusted Le Mans veteran who could not believe two rookies had somehow watched from there.

We arrived back home early on Monday exhausted, although I think I may have promptly gone to work for the day, and on the next Thursday was in WH Smith in Winchester when I saw a magazine with a picture from the race on the cover. I thus bought my first copy of Autosport, and three seasons later was reporting on clubbie race meetings for them (it was amazing, you got in for free, had a great view, could walk up to and chat to anyone you wanted, just for knocking out a few hundred words and the results!).

That started the slippery slope of many years in and around motorsport including working at Le Mans several times with teams, but none of my subsequent visits have got anywhere close to 1986 in terms of incident and variety!