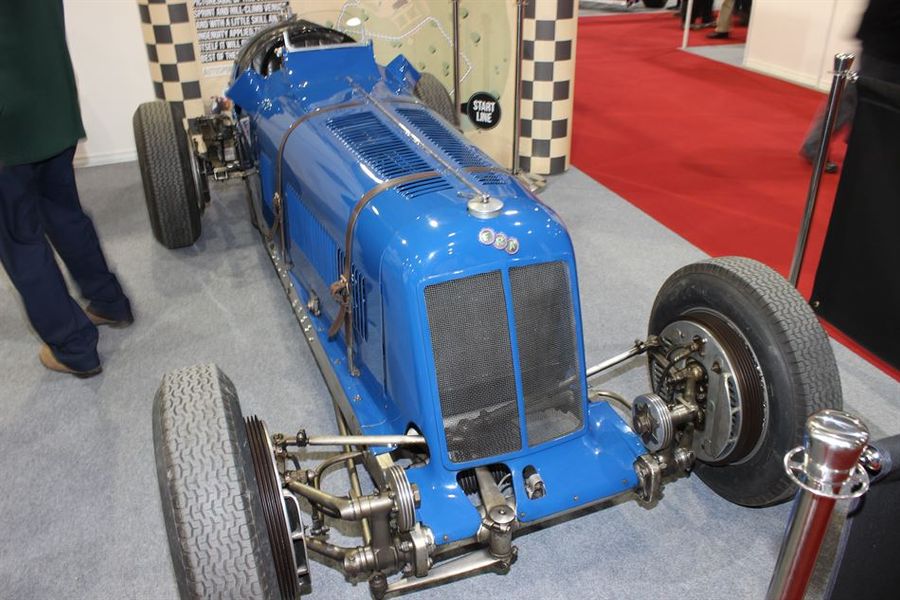 Image: ERA R8C graced the Chateau Impney stand at Race Retro.
The Chateau Impney Hill Climb will return on Saturday the 9th and Sunday the 10th of July 2016, signalling the intention of organisers to make the weekend-long meet an annual fixture on the UK motorsport calendar. The announcement comes following the success of the inaugural 2015 event that saw around 10,000 people visit the grounds of the unique Droitwich hotel to welcome motorsport back to the venue after a near 50-year absence.
Car enthusiasts turned out in force to see a stellar line up of 200 pre-1967 cars and drivers take on the new Hill Climb course, including the Fiat S76, best known as the Beast of Turin, pre-war Grand Prix Bugatti Type 35s, a Historic Monaco-winning Alfa Romeo P3 Tipo B, over half of the world’s remaining ERAs, and a huge number of 1950s and 1960s sports cars, including C-Type and D-Type Jaguars.
“I am delighted to be able to announce that the Chateau Impney Hill Climb will become a yearly meet, returning in 2016 and beyond,” said Rod Spollon, chairman of the Chateau Impney Hill Climb Club. “The support, positive feedback and enthusiasm from both spectators and competitors has been overwhelming and it’s satisfying to know that the new course provided a true challenge, even for some of the most experienced competitors on the hill climb and historic circuit.”
Banbury-based driver Jack Woodhouse, who set the fastest time of day at the inaugural 2015 event with a time of 42.42 seconds in his first ever hill climb, will return to the Chateau to defend his title in his Lotus 20/22 after receiving an honorary invite from the organisers. But competition will be fierce and organisers have been inundated with expressions of interest from drivers with a desire to compete.
Despite the event being in its infancy, it has already become a firm favourite amongst competitors, including driver Mark Riley, who won Class 10 at the inaugural event in the Creamer Special: “If I had to compete in only one event in England, I would want to go back to Chateau Impney. I hold records at Prescott and Bo’ness and I love them all, but the Chateau is very special. The track isn’t what you expect. I walked it and planned it out, but when you drive it, it’s very different. It’s a technical hill and the setting is absolutely gorgeous.”
As well as the competition itself, the event will include spectacular air displays, lunchtime demonstrations, and a vintage funfair for families that will be free of charge with any ticket. The popular Concours d’Elegance will return, where the winning car will be chosen by public vote, and there will be a dedicated classic car club area in the car park. Spectators will also be able to explore the open paddock again, getting up close and personal with the drivers and impressive cars facing the Chateau Impney challenge.
The latest sponsor to support the growing event is Listers, the largest privately owned motor group in England. Listers will be showcasing a number of their marques at the event, including new Land Rovers, Jaguars and Audis, and will take part in the lunchtime demonstration runs with a unique display.
The event will also feature a number of trade stands, where visitors can purchase goods from both local businesses and specialist traders, and even more local food and drink vendors will be serving up a taste of the region. As with the inaugural event, general admission tickets will include free access to the grandstands, and the hill climb runs and driver interviews will be broadcast on a number of large-format screens throughout the Chateau grounds, ensuring that spectators miss none of the action.
Chateau Impney Hill Climb Race Retro Chateau Impney