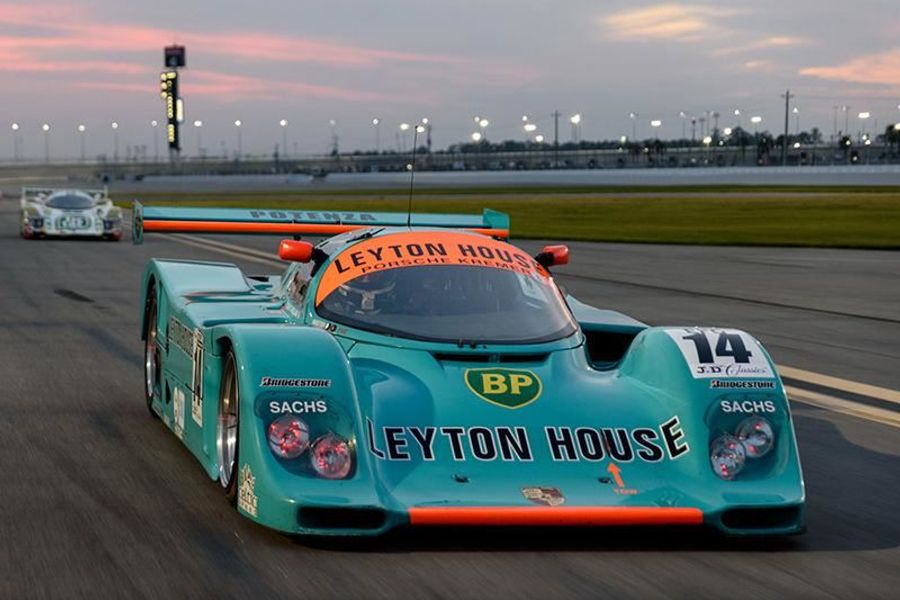 The Third Edition of the Historic Sportscar Racing (HSR) Classic at Daytona presented by IMSA came to a safe and successful conclusion Sunday at Daytona International Speedway (DIS) where six different Run Group Champions were crowned after a full 24 hours of close and competitive racing.
Each Run Group-winning entry was presented with a custom HSR Classic 24 Hour-specific B.R.M. Chronographes watch for their day-long achievements on the 3.56-mile Daytona International Speedway road course.
In addition to the six overall winners, the top-finishing GT entries in Run Groups A through E were each presented with a B.R.M. Chronographes watch for a total presentation of 11 of the fine French luxury timepieces to deserving HSR Classic at Daytona winners.
Five of the six overall winners scored their first Classic at Daytona Run Group victories while Tommy Dreelan and Aaron Scott co-drove to their second title in the 24-hour classic race in the 1987 No. 14 ex-Kremer Racing/Leyton House Porsche 962. Dreelan, Scott and the Celtic Speed team scored the repeat win in Group C, the featured division in this year's Classic at Daytona that had the honor of rolling off first to officially start the 24-hour classic race Saturday afternoon at 1 p.m. EST.
The 1969 No. 1 Lola T70 of Gerard Lopez and Frantz Wallenborn, which was brought to Daytona by the Iconic Racing team from Europe, scored the Classic at Daytona victory in Group A. It was the second-straight "HSR Classics" victory for Lopez and Wallenborn, who also teamed up with Art & Revs to win Group A at last December's HSR Classic 12 Hours at Sebring. Dickie Meaden joined Lopez and Wallenborn as a key third driver in the winning Daytona effort.
Two other Group winners this weekend at the "World Center of Racing" went two-for-two in winning the last two "HSR Classics" at Daytona and Sebring.
David Porter, who scored the Group E win in his 2007 No. 18 Pescarolo Judd LMP1 last December in the Classic 12 Hour at Sebring, backed it up with his first 24-hour Classic race win in the same race car at Daytona on Sunday.
After narrow losses in the first two Classics at Daytona, Porter finally hit the win column with IMSA Champion Joao Barbosa as his co-driver. The Pescarolo started the fourth and final Group E race segment 15 seconds out of first place, but Barbosa made up the difference and then some in the final dash to checkered flag.
An overall Rolex 24 winner and multiple IMSA champion, Barbosa raced to an 18.157-second margin of victory by the finish to give Porter his second "HSR Classics" win in a row.
Then co-driving with Randy Pobst, John Harrold took his Team Mean 1979 No. 94 Chevron B23/36, which is prepared by KMW Motorsports, to the Sebring Classic 12 Hour Group B win last year.
Harrold followed the Sebring victory with his first Classic at Daytona Group B win today but this time looked a little closer to home for his co-drivers. His son Ryan Harrold and KMW team owner Kevin Wheeler made this weekend's 24-hour Classic race victory at Daytona even more special than the inaugural Sebring win.
Another popular winner this weekend was the 2001 No. 16 Oreca-Dallara Chrysler SP1 driven solo by Florent Moulin to the Group D victory. Like the Celtic Speed Porsche, Team Mean Chevron and the winning Lola lineup of Lopez, Wallenborn and Meaden, Moulin topped all four of his Group on-track segments for a convincing victory in his Iconic Racing prepared machine.
The final Group winner was the 1974 No. 99 Porsche - a 911 with 1988 Porsche 993 updates - that Mike Gaulke and Thomas Merrill co-drove to victory in an action-packed Group F battle.
The top GT finishers earning B.R.M. Chronographes watches included the 1969 No. 14 Chevy Corvette L88 of Matt Parent and Tony Garmey who co-drove to a solid fifth-place overall Group A finish behind two Lolas, a Chevron and a McLaren.
The B.R.M. Chronographes watch for the top GT finisher in Group B was won by legendary German driver Dieter Quester who co-drove with Luca Riccitelli to a third-place overall finish in the impressive 1979 No. 7 BMW M1 Procar. The Red Bull-liveried M1 trailed only Harrold's winning B23/36 and the similar 1976 No. 119 Chevron B36 of Josh Boller.
Robert Ames continued the trend of GT machines holding their own with the faster prototypes in Group C with a fourth-place overall finish. Ames was the top GT finisher in the 1993 No. 991 Porsche 964 RS America behind the winning Celtic Speed Porsche 962, the similar 1989 No. 33 Tic Tac 962 of Henrik Lindberg and the Camel Lights 1985 No. 42 Porsche Fabcar of John Higgins and Charlie Monk.
The B.R.M. Chronographes watch in Group D was won by Steve Cohen and Ray Snowdon who put in the top GT showing of sixth overall in the 1995 No. 5 Oldsmobile Aurora GTS.
The Canadian duo of Marc Montour and Louis-Philippe Montour raced to the top GT finish in Group E in their 2015 No. 27 Aston Martin Vantage, crossing the finish line ninth overall in the 32-car group.
The list of current and legendary drivers and motorsports notables that participated in the 2017 Classic at Daytona presented by IMSA included Barbosa, Scott, Quester, Riccitelli, Adrian Newey, Ray Evernham, Ron Fellows, Lyn St. James, Jochen Mass, Patrick Long, Andy Wallace, Jurgen Barth, Butch Leitzinger, Memo Gidley, James Gue, Eric Curran, Jules Gounon, Terry Borcheller, Jim Pace, Kees Nierop, Bruno Junqueira, Eric Van de Poele, Didier Theys, Gunnar Jeannette, John Fergus, Carlos de Quesada and more.
Next up for HSR is the Classic 12 Hour at Sebring, Pistons and Props, presented by the Alan Jay Automotive Network, November 29 - December 3, 2017.