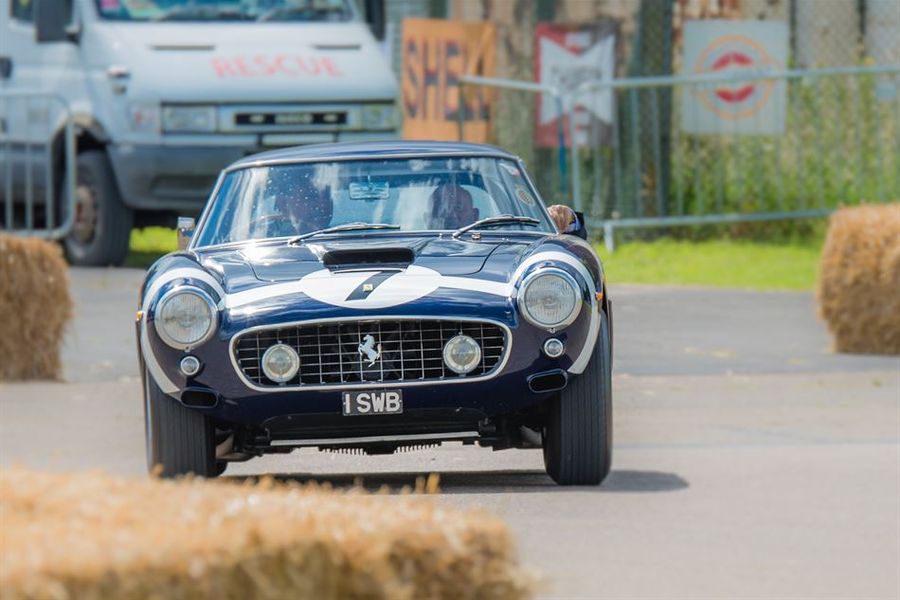 On the weekend of Saturday 27th and Sunday 28th May 2017, the eleventh annual pageant of French motoring excellence – La Vie en Bleu takes place at Prescott Hill Climb, Gotherington in Gloucestershire, home of the Bugatti Owners' Club. This spectacular two day event has become a firm favourite in the motoring calendar, and this year sh ould be no exception. Last year ‘La Vito Rossa’ was introduced to also celebrate everything Italian! Prescott Hill Climb will once again be transformed into a celebration of fine French and Italian automobiles, themed entertainment, musicians, dancers, actors and trade stalls.
New additions to the packed programme include Ferrari 250 GT SWB Berlinetta chassis #2735 is one of the most famous and recognisable 250 SWB’s in the world. Chassis number 2735 was one of only three right-hand drive Competition short-wheelbase cars and one of the most well-known of all 250 SWBs, thanks to the deep blue Rob Walker racing colours and the number seven, tand was the car in which Sir Stirling won his seventh Tourist Trophy race at Goodwood in 1961. It was also raced in period by Graham Hill and Innes Ireland.
This was the Ferrari most raced by Moss, who raced in in five of his twelve Ferrari drive and described it as the “best GT car in the world”. Sir Stirling raced the 2735 GT to victory in all his other five outings in the car during 1961, the International Trophy at Silverstone, the Peco Trophy at Brands Hatch, the previously mentioned Tourist Trophy at Goodwood, plus the Over 1500cc GT  Car race and the Nassau Tourist Trophy in the Bahamas. The latter race being the last he would win before his career ending accident at Goodwood in 1961.
The famous ERAs(English Racing Automobiles) epitomise British motor racing during the 1930s and have a very special place in the affections of patriotic enthusiasts. Fans of British racers will be treated to a special class for ERA voiturettes over the weekend. Six ERA’s will be competing including the iconic ex-Raymond Mays R4D – the most celebrated chassis in the marque's history.
ERA R4D was the only D-Type ever built by English Racing Automobiles in the 1930s and was designed to compete with the highly successful Bugatti’s and Maseratis of its era. ERA founder Raymond Mays also set numerous pre-war records in the R4D, including ones at Prescott hill climb. The vehicle remains one of the most successful pre-war competition cars of its time. Also present will be ERA R4D author and historian Mac Hulbert who will be participating in book signing sessions at the Friends of Prescott shop. His book tells the story of this uniquely historic example that has competed almost without a break for 80-years and achieved innumerable successes.
As previously announced, there will be the opening of ‘Chiron – The Man –‘ an exhibition opening at the Bugatti Trust on May 27th dedicated to the life and racing career of one of Ettore Bugatti’s most famous works drivers: Louis Chiron.