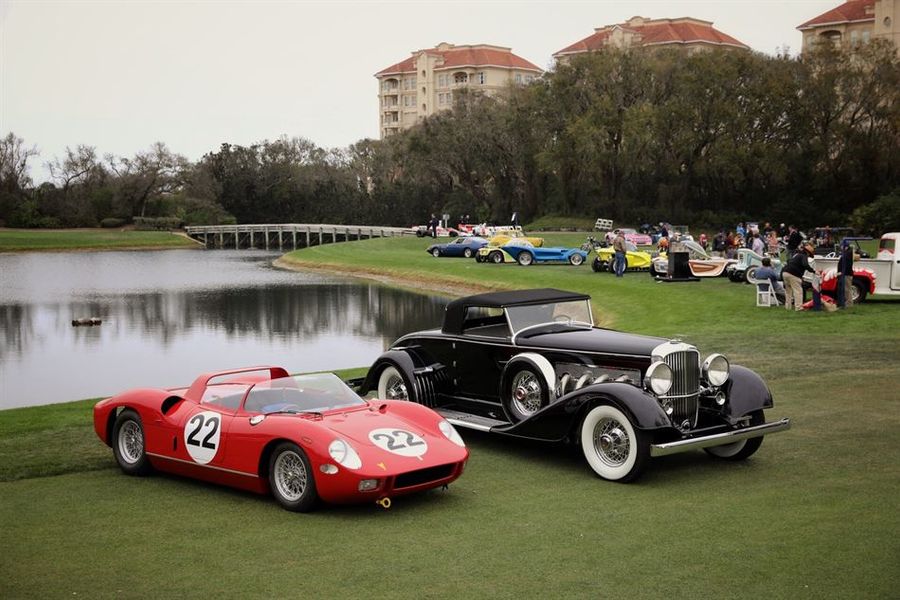 A 1963 Ferrari 250/275P and a 1929 Duesenberg J/SJ Convertible won the Best In Show honors on Saturday, March 10, at the 23rd annual Amelia Island Concours d’Elegance. The news comes following another crowd pleasing year giving special honor to the only double Formula 1 World Champion and two-time winner of the Indianapolis 500, Emerson Fittipaldi.

This year’s competition drew more than 300 cars and motorcycles into 35 classes to the 10th and 18th Fairways of the Golf Club of Amelia Island.

A 1963 Ferrari 250/275P from The JSL Motorsports Collection in Redwood City, California, took home the prestigious Best in Show Concours de Sport Trophy. The winning Ferrari 250/275P won the overall at the 1963 ADAC Nurburgring 1,000Kms with John Surtees and Willy Mairesse and the 1964 Sebring 12 Hours with Mike Parkes and Umberto Maglioli driving.  This car finished second at the 1963 Sebring event and won the first race at Mont Tremblant as a NART entry with Pedro Rodriguez driving. The car was campaigned as a NART entry in 1964 and 1965.

The esteemed Best in Show Concours d’Elegance Trophy was presented to a 1929 Duesenberg J/SJ Convertible owned by Harry Yeaggy from Cincinnati, Ohio. This Duesenberg J/SJ Convertible has Murphy roadster-style coachwork that was restyled in period by Bohman & Schwartz of Pasadena, California. Styling changes included a lengthened hood, slotted fenders and more modern bumpers. One of the early owners of this car was Edward Beale McLean, who owned the Hope Diamond and whose family owned The Washington Post.

“I could not be more pleased with the judges’ decisions for the 2018 Amelia Island Concours winners,” said Bill Warner, Chairman and Founder of the Amelia Island Concours d’Elegance. “We are overjoyed to present the Duesenberg and Ferrari with these honors. These cars are prime examples of automotive prestige and we are proud to recognize them.”

This year’s Amelia Concours honored not only astounding vehicles, but also Emerson Fittipaldi. Fittipaldi’s race cars were among the 300-plus cars on display. The double Formula 1 World Champion and two-time Indy 500 winner displayed a number of the vehicles he raced in including a 1970 Lotus 72/5, 1974 McLaren M23/5, 1974 Porsche 911 RSR IROC, and 1977 Chevrolet IROC Camaro Z28.

Making its international debut at this year’s Concours was the sole Shelby Lonestar, created in secrecy a half-century ago as a replacement for the legendary 427 Shelby Cobra. Based on the GT40 chassis the Ford V-8-powered mid-engine coupe was assembled in England during 1968 and wore the name "Cobra III" in internal Shelby documents. The Shelby Lonestar experienced considerable obstacles in obtaining its name. Ford had acquired the Cobra name a year earlier. Shelby, a Texan by birth, nature and bearing, named his third-generation "Cobra" after his home state and the Shelby Lonestar was born.

Additional highlights on the field included a full class of the outrageous customs of “Big Daddy” Ed Roth. Ed Roth was a legend and an iconoclast. He created some of the most outrageous, reality bending customs of an era that thrived on American individualism run delightfully amok. Roth’s cars took the term “custom” beyond the edge. His signature Beatnik Bandit, Orbitron and Surfite all enjoyed successful movie cameos in addition to their star status in hot rod and custom car magazines.

Advancing in the power-driven age, a special class of electric horseless carriages highlighted the renewed enthusiasm for the 120 year old technology. To complement the 2018 electric car class, The Amelia featured the newest electric and hybrid powered cars from the world’s leading manufacturers along with a seminar hosted by some of the top names in the automotive space.

IMSA GTP celebrated its GTP -- Grand Touring Prototype -- racers from the 1981 through the 1993 IMSA Championships. A quarter century has passed since IMSA’s GTPs last raced in anger. They were the spiritual descendants of the mighty, unlimited Can-Am racers of the 1960s and 1970s and the vanguard of a new generation of automotive performance and technology. By the end of the GTP era in 1993 they had eclipsed every major record the fabled Can-Am racers set.

Revealed at the 2018 North American International Auto Show, the recently-discovered Ford Mustang Fastback from the 1968 movie Bullitt was featured in the Hagerty booth. After being reclaimed just a few months ago, the Bullitt Mustang became the twenty-first automobile on the National Historic Vehicle Register, insuring that both the film and the car will live on in the Library if Congress.

“With every passing year, the Amelia Island Concours continues to grow,” Warner said. “It is magical to see the wide variety of vehicles that appear on the green each year. Their stories and history truly allow us to celebrate the automobile industry in a number of ways.”

The 24th annual Amelia Island Concours d'Elegance will be held March 8-10, 2019 on the fairways of The Golf Club of Amelia Island at The Ritz-Carlton, Amelia Island. The show’s Foundation has donated over $3.2 million to Community Hospice of Northeast Florida, Inc. and other charities on Florida’s First Coast since its inception in 1996. In 2013 and 2016, the Amelia Island Concours d’Elegance won Octane Magazine’s EFG International Historic Motoring Event of the Year award.