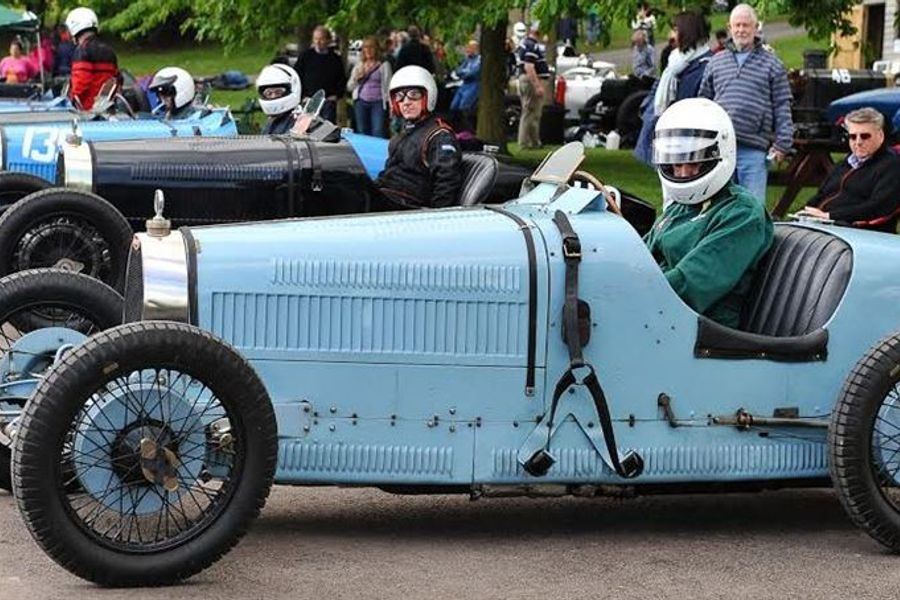 The eleventh annual pageant of French motoring excellence ‘La Vie en Bleu’ will take place once again at Prescott Hill Climb in Gloucestershire on Saturday 27th and Sunday 28th May 2017. The two day event has always been a firm favourite in the motoring calendar, and this year will be no exception, featuring host of Bugattis as well as a wide-range of other cars.
Opening during the weekend at the Bugatti Trust is ‘Chiron - The Man’, an exhibition dedicated to the life and racing career of one of Ettore Bugatti’s most famous works drivers: Louis Chiron. Hugely successful in the 1920s and 1930 racing Bugattis including the types 22, 35, 51 and 53, he had an extraordinary life which saw him compete in GP racing up to the age of 55.
The Monegasque ace won a number of Grands Prix in the 1920s and 30s, including the 1931 Monaco GP at the wheel of a Bugatti Type 51. He also took victory in that year’s French GP and, in 1933, the Spa 24-Hours.
The exhibition will chronicle the start of his career and progress to becoming an official and celebrated team member of Écurie Bugatti. The Bugatti Trust exhibition will include original GP cars from the period, photographs of seminal moments of his career and historic racing memorabilia. A small additional display will celebrate the renowned Bugatti Queen Hellé Nice who was a racing contemporary of Chiron.
Last year the popular Prescott, home of the Bugatti Owner's Club, event expanded to include ‘La Vita Rossa’, celebrating all things Italian as well as French – not only via the cars, but also musicians, dancers, entertainers and visiting car clubs. This year promises to feature even more French and Italian content on the hill with special competition classes for French and Italian marques, plus a round of the Ferrari Hillclimb Championship will be taking place on the Saturday.
The paddock will be adorned with numerous iconic classic and supercars including Ferrari 250 GT SWB Berlinetta chassis #2735 - One of the most famous and recognizable 250 SWB’s in the world, raced by Sir Stirling Moss, Graham Hill and Innes Ireland (Sunday only).
Also present will be the the thunderous and flame-spitting ‘Beast of Turin’. The Fiat S76 is the one surviving example of a pair of land speed record contenders the Italian automaker built before WWI. The Beast of Turin’ was built in 1910 with the express intention of beating the land speed record, held at the time by Blitzen-Benz. Its 28.5-litre Fiat S76 engine was capable of providing an impressive 300bhp - enough to propel the car to 116 mph, and a one-mile land speed record, in 1911. After WWI Fiat dismantled one of the two impressive machines to prevent rival manufacturers obtaining its technical secrets, while the other one was purchased by Russian aristocrat Boris Soukhanov. In 2003, engineer enthusiast and current owner Duncan Pittaway discovered the remains of one chassis in Australia and united it with the surviving S76 engine from the other car. Duncan will be firing up the beast and competing throughout the weekend.
In addition to activities in the paddock and on track taking to the skies above will be the stirring sounds of the Battle of Britain Memorial Flight Dakota (Sat) and Spitfire (Sun). Fans of British racers, meanwhile, will be treated to a special class for ERA voiturettes. Six are already confirmed to be competing including the iconic ex-Raymond Mays R4D – the most celebrated chassis in the marque's history. ERA R4D was built by English Racing Automobiles in the 1930s, designed to compete with the highly successful Bugatti’s and Maseratis.
In spite of its success, it was the only D-Type ever built, but accumulated a formidable reputation, and competition records in its various guises. ERA founder Raymond Mays set numerous pre-war records in the R4D, including ones at Prescott hill climb, Shelsley Walsh, Brighton Speed Trials and Brooklands Mountain Circuit. The vehicle remains one of the most successful pre-war competition cars of its time.
To tie in with the Louis Chiron exhibition the new Bugatti Chiron is set to make its first-ever appearance at Prescott. The 1479bhp hypercar is the successor to the legendary Veyron, and will be carrying out demonstration runs on the historic hillclimb over the course of the weekend.