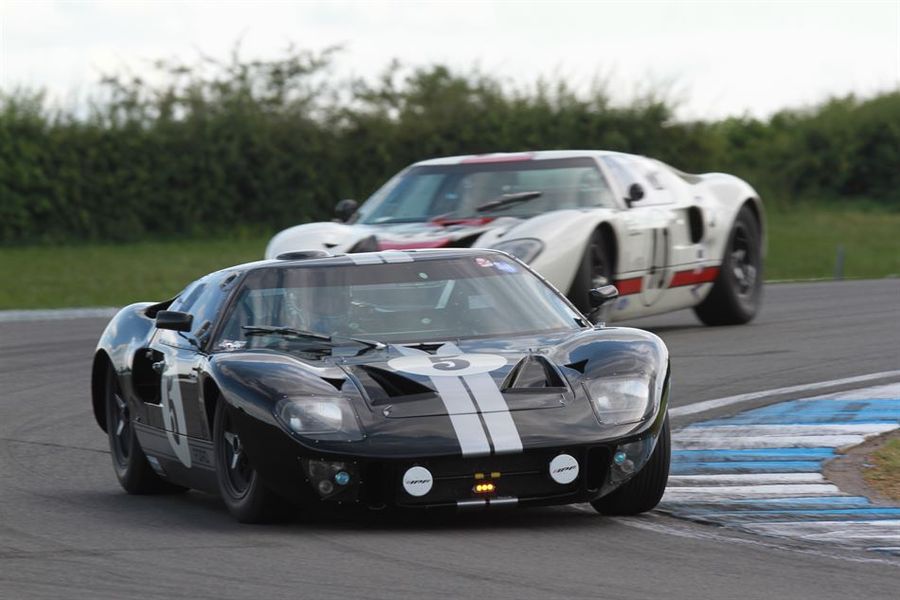 A tremendous four-hour race and enthralling races for the FIA Masters Historic Sports Car and Masters Pre ’66 Touring Cars made the Masters Festival at Donington Park last weekend a runaway success. On the weekend that the US celebrated Independence Day, there was a strong American theme as Ford GT40s dominated the inaugural Masters Four Hours, Ford Mustangs and Falcons locked out the touring car podium and Chevrolet power blitzed the Historic Sports Cars.

The first running of the Masters Four-Hour was a real hit with teams and drivers as more than 30 cars contested the longest UK race of the season for historic cars. Everyone involved hopes that the four-hour, 123-lap race for Pre ’66 GT cars will be repeated. A fierce battle among the Ford GT40s topped the race as Roger Wills and James Littlejohn won after an absorbing fight with the similar GT40 of Jason Wright, Michael Gans and Andy Wolfe.

Over the opening stages Tony Wood and Martin Stretton made it a trio of GT40s fighting for the lead but were later hit by a broken exhaust and misfire. They battled on to take third, albeit two laps down. Meanwhile, the Wills and Wright cars were racing on the limit and after three hours the gap was just 1.6s. They traded the lead several times until Wolfe caught a backmarker at the Old Hairpin at just the wrong moment and spun. In an instant, Wills went 15-seconds clear and set the seal on his victory.

“It was an amazing race! I went for it and Andy Wolfe was pushing very hard,” said Wills. “It was very exciting and hard work,” he added. “The race had a great format and I hope it can be repeated.”

Behind the fourth-placed AC Cobra of Andrew Haddon and Phil Keen, the best of the under 2-litre cars was the Lotus Elan of David Tomlin and Richard Meaden which flew to a fine fifth place.

Leo Voyazides and Simon Hadfield added another victory in the FIA Masters Historic Sports Car Championship round with a typically strong run at the head of a fabulous 32-car field. “I was fast enough so that we could win together,” said Voyazides with understatement of a fine opening stint that set up the victory. “The car was fantastic,” said Hadfield. “Eric Broadley was a genius and we run the car the way he intended.”

Behind the Voyazides/Hadfield car, two more Lola T70 Mk3Bs of Jason Wright/Andy Wolfe and Daniel Gibson/James Littlejohn battled for second. Wolfe just edged Wright’s car home for second place by only a third of a second. Fourth was the leading prototype in the form of Michael Gans’ Lola T290 while Keith Ahlers and Billy Bellinger guided their Cooper Monaco King Cobra to best of the pre ’66 cars and Mark Bates thrilled the fans with his spectacular handling of his class-winning Porsche 911 RSR.

The Masters Pre ’66 Touring Car race was won in convincing style by Henry Mann’s Ford Mustang. However, behind the Alan Mann Racing car it was much closer.

Heroic performances from Nick Swift and Jonathan Lewis worked their Mini Coopers into second and third place after the pit stops, but they could not defend against the V8s as three cars chased them down over the final laps.

Roger Wills (Mercury Cyclone Comet) went through into second with 10 minutes to run. After struggling to get the family Ford Falcon restarted after taking over from his father Rob, Ben Hall was on a charge and also pushed the Minis back.

Flying up from the back of the grid after gearbox dramas in qualifying was the Ford Mustang of father and son Mike and Michael Whitaker. Into the last couple of laps Hall took second from Wills. Whitaker and Wills were then nose-to-tail on the final lap and a spin at Melbourne consigned Wills to fourth as Whitaker claimed the final podium place. Wills recovered for fourth just ahead of the Minis.

Finally, the two 70s Celebration races were won by Chris Beighton (Sunbeam Tiger) and Mark Wright (Ford Escort Mk2). In the opener, Beighton had to recover from being edged wide at the Old Hairpin on the first lap. In the later race, with Beighton absent, Wright charged to victory as Nicholas King (Aston Martin DB4) again ran second.