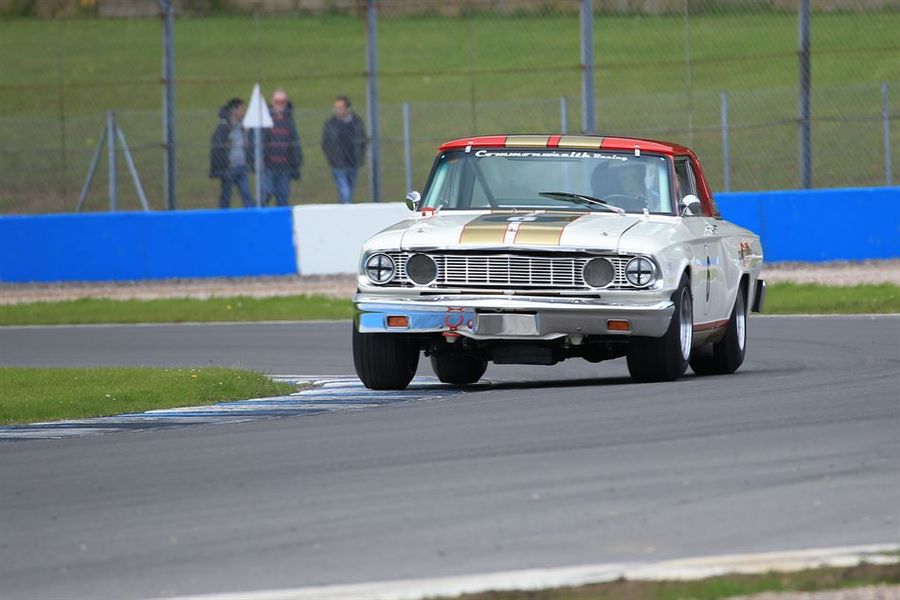 Henry Mann claimed honours in the 60-minute Masters Pre-66 Touring Car Race at Donington Park in his Invitation Class Ford Fairline. Mann’s Ford Fairlane led from pole position, with the Andy Wolfe/Michael Gans and Sean McInerney Lotus Cortinas right behind. Carlos Monteverde soon made progress up to third whilst Andrew Haddon made a great start in his Cortina from 11th to run fourth. Behind them, the Minis were all circulating as a team, with Brian Johnson heading the group in his first motor race for two years, although Masters guru Ron Maydon would soon nip ahead, as would Jonathan Lewis. Then came a delayed Sean McInerney, having had a gravelly moment and losing nearly two laps in recovery. Up front, as Mann led, Monteverde and Haddon clashed at the Melbourne Hairpin and the Brazilian pitted to hand to Gary Pearson as Andy Wolfe assumed the lead on the road. Haddon received a drive-through penalty for the incident. When the pit window closed, Henry Mann back continued to lead with a three second-advantage over Michael Gans’ Cortina and Mark Burton’s Mustang in third. Mark Martin (in for Haddon) was in fourth but served the drive-through, allowing Gary Pearson’s Cortina to take the place ahead of Graham Pattle. Jonathan Lewis relieved Ron Maydon of the class lead as they were lapped by Henry Mann with 15 minutes remaining, Mann maintaining a six-second gap to Michael Gans. At the flag, Henry Mann took outright victory with Andy Wolfe/Michael Gans taking second and THHS victory. Mark Burton’s Mustang was third to win the THA class and Mini-mounted Jonathan Lewis took THD honours in seventh.