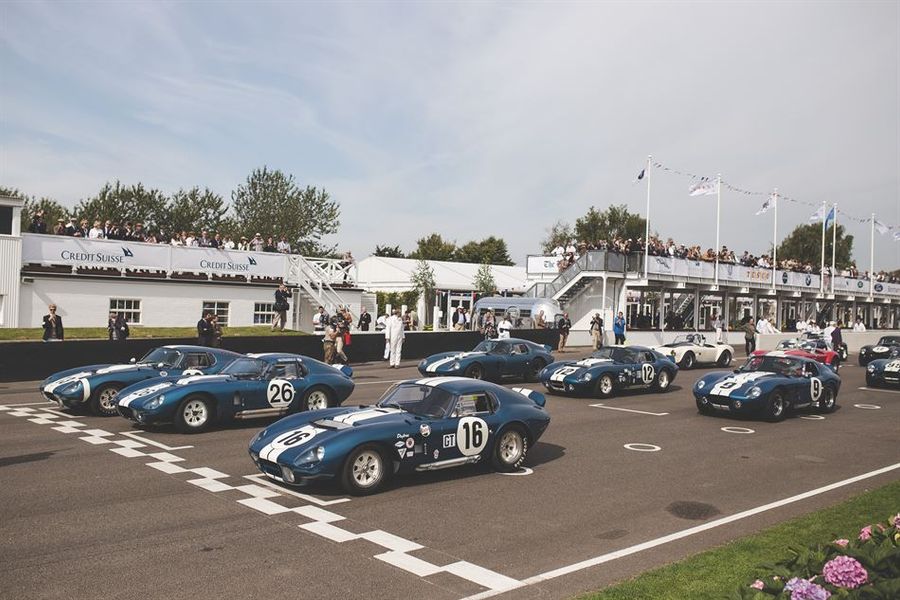 An evocative line up of Shelby Cobra Daytona Coupes headlined an outstanding opening day at the 2015 Goodwood Revival. It is believed to be the first time that all six original examples of Carroll Shelby’s creation have been brought together, including the prototype, plus veterans of races at Le Mans and Goodwood.

The six, aggressive Kamm-tailed GTs powered round the Goodwood Motor Circuit track in an evocative display that brought back memories of the car’s World Sports Car Championship winning year, 1965. All have been on display at a recreation of the 1965 Sebring pits: like Goodwood itself, one of the Cobra’s seven victories that year.

The on-track activity began with a display of pre-1966 Land Rovers before a host of ‘Gassers’ lined up in front of the grandstands. These 1940s and 1950s drag-racing street rods, so called because they ran on ‘gasoline’ rather than nitromethane, put on a crowd- pleasing display of standing starts, provoking great plumes of tyre smoke.

A parade of cars associated with the great Bruce McLaren was another highlight alongside the day’s practice sessions for the packed race schedule.

The first race of the meeting took place at the end of the day, the Freddie March Memorial Trophy, a 90-minute encounter for sports cars from the early 1950s, held in changing weather conditions. From the time that he took over the JD Classics Cooper-Jaguar T33 from co-driver, Derek Hood, Chris Ward totally dominated the proceedings.

Formula One on the Streets of Adelaide this Friday