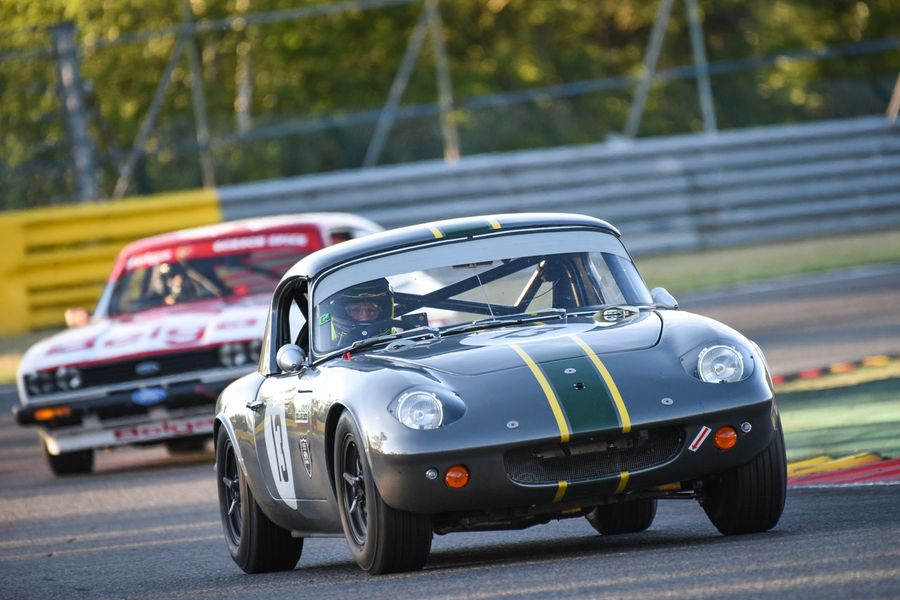 Spectators at the Spa-Francorchamps watched some spectacular racing at the weekend, the three hour long Iberian Historic Endurance race, entertaining in the heat. The Shelby Cobras dominated the qualifying, with five cars in the first sixth place, but the race featured a range of differeing pit strategies and in the last hour the Lotus Elans were at the front due to their greater fuel economy, the car of Grahame Wilson and David Pittard taking the win.

The Spa 3 Hours 2019, now in its fourth edition, was truly a summer event. Under the heat wave which was felt all over Europe, the whole race was ran in 25C+ weather. Fully booked as usual, the entry included teams from 13 nationalities and over 18 different makes.

The Shelby Cobras took the lead early on, with four cars in the first positions, including the Portuguese Pedro, Rui Macedo Silva and Joaquim Jorge in first place, followed by the English duo Jason Yates / Ben Mitchell and the Belgians Thierry de Latre / Christophe Van Riet.

With several cars stopped out on track around 45-minutes into the race, the safety car went out, meaning the strategies for managing fuel stops and tire changes were varied. Some took the chance to go into the pits, while others preferred to stay on the track. Out of those in the five first positions, only the Portuguese Cobra and the English Porsche 911 RS of Paul Daniels/ Mika Palttala, who had in the meantime ascended to fourth place, stayed on out.

At the end of their first racing stint, Pedro, Rui Macedo Silva and Joaquim Jorge continued in first place, followed by Nick Sleep / Joel Wykeham in the British Ford Mustang and with the Elan of Wilson and Pittard now in third, with the other Lotus Elan, driven by Carlos Barbot and Pedro Matos, in close pursuit. The second shift was extremely exciting, with the English Mustang climbing to the first place, only to be overtaken by the two Elans, who had been consistently gaining places.

The Elans managed to get a considerable advantage over the competition and provided an excellent show during their epic struggle for the first position in the last hour of the race. The Lotus from Luxembourg eventually achieved victory by a narrow eight seconds over the Portuguese car.

The Nick Sleep / Joel Wykeham Mustang finished in third place, due to a perfect pit strategy and excellent consistency, leading to a great result.

In a race dominated by the H1965 category, the best car in the H1976 category was the debuting Ford Escort RS1600 of Greg Caton and Tim Swadkin, who finished in sixth place, by a narrow 15-second lead in the last shift, overtaking the English Porsche 911 Inglês RS, which had earlier fought for the top positions. The final podium team was the French Franck Laga, Patrick Malherbe and Oliver Breittmay, also driving Porsche 911 RS.

In the H1971 category, the BMW 2002ti of the Swedish Daniel Frodin, Thomas Eriksson and Rikard Hasselblad took an early lead. However, 15-minutes in they had been overtaken by theLotus Elan +2 of the Portuguese Filipe Matias/ Pedro Cerqueira. The Spanish father and son Ildefonso and Alfonso Garcia had a very consistent race and seem poised to finish in third place, but their Porsche slowed down in the last lap due to a mechanical problem and was overtaken by the Portuguese crew of Piero dal Maso / Nuno Nunes right at the finish line, with a difference of less than a tenth of a second.

The BRM Performance Index, the most important category of the Iberian Historic Endurance, was heavily contested, especially due to the favourite two Lotus Elan’s magnificent exhibitions. However, it was the small Austin Healey Sebring, driven to the limit by Marcus Fellows / David Smitheram, who climbed position after position throughout the race, managing to finish admirably in 35th place, which won the Performance Index, taking a fabulous watch back home to England. They were joined on the podium by Wilson/Pittard and Barbot/Matos, the two teams who topped the overall ranking.

For Diogo Ferrão, this was an event that will be hard to beat. “These longer races showcase not only sheer speed but also the drivers’ consistency, forcing the teams to read the race and tweak their strategy accordingly. It is a complex system which demands virtual perfection from all members of the team during all three hours to achieve the desired result. I was particularly happy with the several fights for positions until the end of the race, with several positions being decided
only in the last lap,” he said.

With the latest Historic Endurance race concluded, the competition will take a break for two months, returning on September 14th and 15th, at Jerez de la Frontera, in southern Spain.