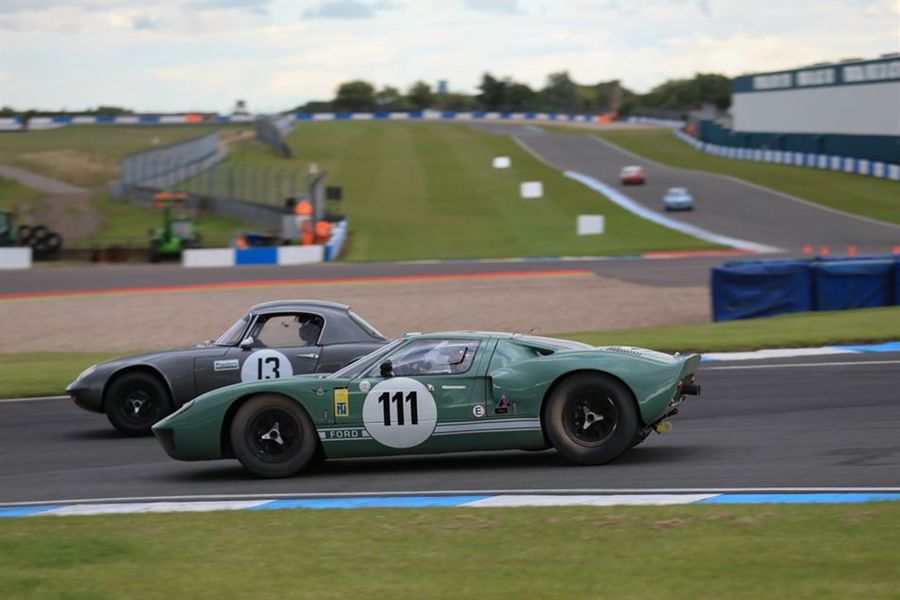 Andy Newall and David Forsbrey took victory in the Masters Three Hours spectacular at Donington Park last weekend after a race full of action. A Ford GT40, Jaguar E-type and AC Cobra fight was the highlight of the opening laps, with David Forsbrey/Andy Newall completing the first lap ahead of the Chris Chiles junior and senior Cobra, which in turn was being monstered by the second GT40.
On lap three the rain began, with the Jason Wright/Michael Gans GT40 making places hand over fist, coming through sixth after starting 10th. Meanwhile the Carlos Monteverde/Gary Pearson/Andrew Smith GT40 was losing places, dropping to ffith and promoting the Jon Minshaw/Phil Keen E-Type  to third.  The Nick Bates/Sean McInerney 911 had made a great start from 13th to ninth, as the Pearson car took third from Minshaw/Keen.
By lap seven, the weather was alternating between dazzling sun and heavy downpours, as Chris Chiles Jr took the lead of the race at the Melbourne Hairpin, the Cobra proving highly adaptable to the changing and challenging conditions. The GT40 was back ahead a lap later as the track gave back some grip.
On lap 10, the Minshaw/Keen E-Type pitted from fourth with mechanical problems. David Forsbrey set some great laps to pull away from the Cobra of Chiles with the E-Type of Pearson 12 seconds further behind. Meanwhile in the next GT40 battle, Carlos Monteverde relieved Jason Wright of fifth position and began gaining on the Andy Wills Cobra ahead.
After half an hour, the sun was shining and Carlos Monteverde was making hay, taking fourth from Andy Willis, with third place some 30 seconds up the road. Forsbrey (GTP class) led Chiles (GTB) by 16 seconds and Ron Maydon was leading the GTA class in seventh place. Jason Wright’s GT40 overhauled Andy Willis in the Cobra for fifth place, following the Monteverde car up the field as the track dried.
Jason Wright in the GT40 received a drive-through penalty for a yellow flag infringement, but found himself in the gravel at Craner Curves and served the penalty several minutes later, ending up in 17th place.
Carlos Monteverde pitted the GT40 from fourth place after one hour, handing to Gary Pearson who left the pits in fifth. Forsbrey’s lead was dropping from 14 to 12 seconds, then to 10 from the Chiles Cobra and the Pearson E-Type.
One hour 15 minutes in, with the lead at eight seconds, Chris Chiles Jr set fastest lap in his pursuit of the leader. After 80 minutes, David Forsbrey pitted from the lead, refuelling and handing over to Andy Newall, the Chiles Cobra now assuming the lead, the order now Chiles/Pearson/Wills ahead of the still stationary Newall GT40.
Andy Wills pitted five minutes before halfway, handing to Rob Hall, as the pit stops began in earnest, elevating Ron Maydon to third overall in the Ginetta.
Just past the halfway point, Chris Chiles Jr completed 50 laps, one of only half a dozen cars not to have yet stopped. The Pearson Jaguar was second after Ron Maydon pitted, with Rob Hall’ Cobra in third. Andy Newall in the GT40 was making good progress, coming from sixth through to fourth.
A safety car was scrambled after 100 minutes for a car stranded on track, at this time Chris Chiles Jr made an inspired choice to pit from the lead. With the safety car in and 75 minutes to go, the Chiles Cobra held a lead of nearly a full lap as the GT40 of Andrew Smith made a third, then fourth, then fifth stop from ffith place to retire. Newall was now into second in the GT40, lapping consistently seven seconds a lap quicker than the leading Cobra. GTA was being led by James Hagan in the Ginetta from Nigel Greensall in the Elan, but only by four seconds…
With the final hour in prospect, Newall was hitting his stride in the second-place GT40, setting fastest laps but still 72 seconds behind the leading Cobra. Nigel Greensall had caught James Hagan and passed the Ginetta to lead the GTA class.
More rain threatened as the lead shrank further to 51 seconds and when it fell to 21 seconds, it was game on for the lead. The gap for third between Pearson’s E-Type and Hall’s Cobra dropped to three seconds with 45 minutes to go.
On lap 69, Newall could see the leading Cobra and closed in further, taking the lead through the Craner Curves after relentless pursuit. Eyes turned to the battle for third, which was tighter, the E-Type staying ahead until lap 73 when the Pearson Jaguar was overhauled by the Cobra of Rob Hall, each car being strong at different points on the circuit.
With half an hour to go, Newall was holding a strong 25-second lead over Chris Chiles Sr, then came the Rob Hall Cobra a further 25 seconds behind, now catching Chris Chiles having passed the Pearson Jaguar. Nigel Greensall held fifth and GTA lead from James Hagan, then came Billy Bellinger in the Morgan, three laps ahead of the GT40 of Michael Gans. Hall and Pearson were now running together, catching Chris Chiles’ second-place car at a rate of knots. On lap 82, the Chris Chiles snr was passed by both Hall and Pearson in the space of two corners, scant reward for a race well run.
At the flag, Newall and David Forsbrey took the victory with Rob Hall/Andy Wills in second and John/Gary Pearson’s E-type in third. The valiant Chiles finished fourth and Nigel Greensall took fifth and the GTA win, with the Ginetta of James Hagan/Ron Maydon grinding to a halt at the Melbourne loop on its last lap in sixth.
Masters Three Hours AC Cobra David Forsbrey Ford GT40 Andy Newall Jaguar E-type Donington Park