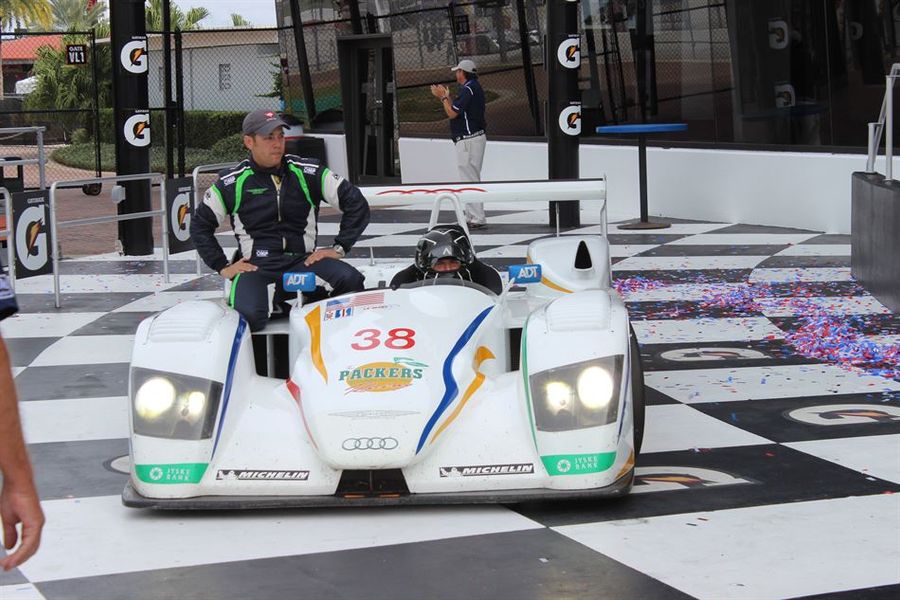 4th, at Sebring International Raceway. Following the format established by the successful Classic 24 Hour at Daytona presented by IMSA, the Classic 12 Hour at Sebring will feature six different Run Groups showcasing race cars from similar eras competing in different classes in tribute to the legendary 12 Hours of Sebring race.
Primarily competing in the top-tier Run Group E for the most modern cars, more than a dozen iconic prototypes and GT machines are already entered in that run group alone for the Sebring race, which is officially entitled the Classic 12 Hour at Sebring, Pistons and Props, presented by the Alan Jay Automotive Network. The Group E entry list to date includes everything from Audi R8 LMPs that were winning races and championships over 10 years ago to a full lineup of Daytona Prototypes, a class that was retired from competition just earlier this month.
An early favourite for the Classic 12 Hour Group E victory is the Rogers Motorsports 2005 Audi R8 LMS that was driven to victory in the first two runnings of the Classic 24 Hour at Daytona in 2014 and 2015. Doug Smith co-drove the Audi to victory at Daytona both years, teaming with Andy Wallace in 2014 and Butch Leitzinger last year. Smith and Wallace will co-drive in the Classic 12 Hour.
Travis Engen is also Sebring bound with his similar 2005 Audi R8 LMP for the Classic 12 Hour where both Audis will battle with the similar-era 2007 Pescarolo Judd LMP of David Porter from GMT Racing. Engen has raced his Audi R8 LMP to several HSR endurance-race victories at Sebring while Porter finished second to Smith and Leitzinger last November at the Classic 24 Hour.
Several 2006 Ford GT race cars, the immediate predecessors to the Ford GTs that won and nearly swept the GTE-Pro podium in the 24 Hours of Le Mans this past June, have also been entered in the Classic 12 Hour. The Atlanta-based team of Dave Robertson and his wife Andrea Robertson are each entered in a Ford GT MK7. The Fords are from the team's same stable of race cars that produced an incredible third-place GTE-Am finish in the 2011 24 Hours of Le Mans, where the Robertsons co-drove with David Murry. A third Ford GT from the same era as the Robertson's race car will be driven by versatile historic racing competitor Patrick Mullaney.
A stout entry of more contemporary prototypes is coming to the Classic 12 Hour from Hudson Historics, which is fielding no less than five Corvette Daytona Prototypes. Two of the Corvettes are predecessors to the No. 31 Whelen Engineering/Action Express Racing DP that Dane Cameron and Eric Curran drove to the 2016 IMSA WeatherTech Sportscar Championship. Father-and-son co-drivers Paul Reisman and John Reisman are entered in one of the race cars, a 2010 version of the No. 31 that still sports the same red-and-white Whelen livery worn in its prime.
Another ex-Whelen Corvette DP is entered for William Hubbell with the race car now carrying the black and gold Hubbell Racing livery.
Two former Wayne Taylor Racing (WTR) Corvette DPs are also part of the Hudson Historics armada. Wayne Jackson will race the same ex-WTR Corvette that finished second in its final IMSA appearance at Petit Le Mans earlier this month. A second former WTR Corvette has also been tabbed for a special guest driver that will be announced in the near future. The final Hudson Historics Corvette Daytona Prototype coming to the Classic 12 Hour is the former 8 Star Motorsports machine that won its class in the inaugural Classic 24 Hour in 2014. Florida-based driver Jeff Ippoliti will race this DP entry at Sebring.
Several retired IMSA Prototype Challenge (PC) race cars are also expected at the Classic 12, with the father-and-son team of Juan Gonzalez Sr. and Juan Gonzalez Jr. already confirmed in a 2013 Oreca FLM09. The Gonzalez family will co-drive the ex-CORE autosport PC that still carries the winning No. 54 livery that, among other major race wins, the CORE team carried to victory three times in the 12 Hours of Sebring in 2012, 2014 and this past March.
Another prototype of note coming to the Classic 12 Hour is a 2001 Chrysler Dallara LMP900 that will be brought all the way from Luxembourg to race at Sebring for the first time in the hands of Florent Moulin. Chassis DO-002 is the same race car that finished fourth in the 2001 24 Hours of Le Mans, and third in LMP900, with Olivier Berretta, Karl Wendlinger and Pedro Lamy driving.
Sebring's motorsports heritage began with the running of the Sam Collier Six Hour Memorial Grand Prix on December 31, 1950. Founder and Promoter Alec Ulmann then established the first 12 Hours of Sebring in 1952. The race quickly evolved into one of America's most important international road racing events.
The Classic 12 Hour at Sebring, Pistons and Props, is also a celebration of the lasting connection between legendary race cars and Sebring's rich aviation history. The on-track and on-the-runways Classic 12 Hour celebration pays tribute to both the legendary auto race and historic Hendricks Field, the iconic military and civil aviation facility on which the 12-hour event is run every year. Still in part an active airport, the Classic 12 Hour, Pistons and Props, will see vintage aircraft land on one of the Sebring runways and taxi into the paddock to be displayed right alongside the historic race cars. A group of race car drivers will be asked to judge the planes for "best in show" honor and much more.
Joining event presenting sponsor, the Alan Jay Automotive Network, and JSI Logistics as partners of the Classic 12 Hour at Sebring, Pistons and Props, is leading vintage and historic motorsports publication Classic Motorsports Magazine. Using the same program in place at the successful HSR Mitty each April at Road Atlanta, Classic Motorsports Magazine will support the Classic 12 Hours of Sebring with car club corrals, sponsor and spectator promotions, vendor areas and much more.
HSR Sebring Sebring 12-Hours