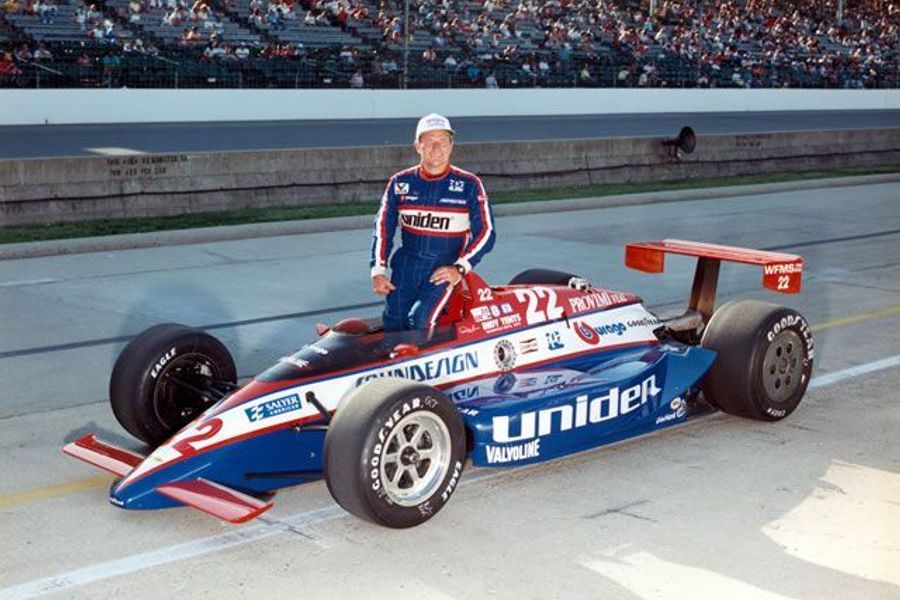 Popular Indy 500 veteran Dick Simon has decided to make this year’s Indy Legends Charity Pro-Am at the Indianapolis Motor Speedway (IMS) his final race as a driver. Simon, 84, has driven in every Brickyard Invitational since the 2014 inaugural event. The Pro-Am is the Saturday, June 16 feature event of the Brickyard Invitational at the Indianapolis Motor Speedway run by the SVRA.
“The Brickyard Invitational has given me a chance to extend my career in a very enjoyable way,” said Simon. “It’s always special to come back to Indy and this racing has brought me a ton of fun. I am delighted my final turn at the wheel during competition will come at the Speedway. This announcement gives me a chance to let fans know my decision in advance.”
“Dick is such a popular figure in the paddock, and not just among fans,” said SVRA President and CEO Tony Parella. “During our drivers’ meetings, I have been very impressed with all the drivers who expressed their gratitude for Dick’s help in providing them with their breakthrough career opportunities. I would like SVRA to continue to have a relationship with him and we will talk about that going forward.”
Simon, who maintains a level of physical fitness that is the envy of many younger drivers, is one of the most colorful characters of Indianapolis 500 history. Brimming with personality he saw the promotional value for his sponsors of being the first car to take to the track when practice opened in May. A veteran of 17 Indianapolis 500s, he scored a best finish of sixth in 1987. He was a highly respected team leader who helped launch the careers of such notables as two-time Indianapolis 500 winner Arie Luyendyk and 1992 Rookie-of-the-Year Lyn St. James. He also managed the team for Eliseo Salazar’s IndyCar victory at Las Vegas Speedway in 1997.
The Pro-Am feature Simon will compete in is a 45-minute race of American muscle cars on the Speedway’s 2.43-mile Grand Prix road course on Saturday, June 16. The cars are 1963 to 1972 vintage Corvettes, Camaros and Mustangs of the “Group 6” SVRA class. As in the previous three years, the professionals will be paired with amateur drivers, splitting stints at the wheel at their discretion. Drivers who have announced entries include Al Unser Jr., Paul Tracy, Jimmy Vasser, Willy T. Ribbs and Max Papis. Additional Indy 500 drivers will be announced as they enter the Pro-Am in the coming weeks.
In addition to the Pro-Am, there will be a festival of other activities at the Brickyard Invitational including the Sunday, June 17 feature race by the professional Trans Am series headed by 2017 champion and emerging superstar, 20-year-old Ernie Francis Jr. The weekend also presents the Hagerty Insurance “shine and show” car corral, vintage motorcycle racing, and 500+ vintage racers ranging over 100 years of automotive history racing in SVRA Groups 1 through 12. An oval exhibition featuring a racecar show of judged competition for the A.J. Watson and Sir Jack Brabham trophies led by track historian Donald Davidson will also take place. Also, the Pre-1920 Race Exhibition cars will be on track along with a paddock area full of in-period equipment displays. The National that finished seventh in the first Indianapolis 500 in 1911 will be driven at speed.