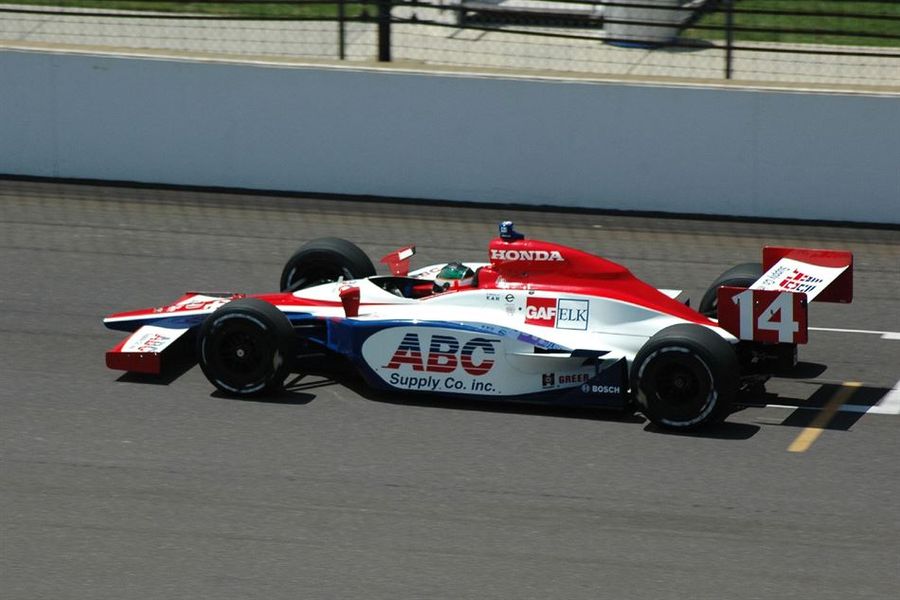 Picture: Darren Manning in Indy 500 Qualifying
The Sportscar Vintage Racing Association (SVRA) have announced that A.J. Foyt IV and Darren Manning – both former drivers for four-time Indy 500 champion A.J. Foyt’s race team – will once again be among the 33 Indy 500 drivers lining up at the famous yard of bricks at the June 17th Indy Legends Charity Pro-Am. That race is the Saturday feature of the Fathers’ Day Weekend Brickyard Invitational. Three slots remain for the field of 33 Indy 500 veterans.
“The Foyt name is pure magic not just at Indy but around the world in motorsports,” said SVRA President and CEO Tony Parella. “We are honored to have young A.J. join us again, but also a great former A.J. Foyt Enterprises driver like Darren. Looking at our entry list, I am counting something like nine drivers who drove for A.J. in their careers. That’s twenty-seven percent of our field.”
Among the names of former Foyt drivers entered in the Pro-Am are father and son Indy 500 champions Al Unser and son “Little” Al. Al Unser drove for Foyt in his 1965 rookie year and Al Jr. was in A.J.’s car for his final Indy 500 42 years later in 2007. In addition to the Unsers, Foyt IV and Manning, other former Foyt drivers in the Pro-Am include Paul Tracy, Davey Hamilton, Donnie Beechler, Davy Jones and Jaques Lazier. All the Indy 500 veterans at the Brickyard Invitational will practice in a special track session on Friday, June 16. They will also be available for autographs and pictures during the pre-race fan pit walk just before their Saturday feature race.
The Pro-Am feature is a 45-minute race on the Speedway’s 2.43-mile Grand Prix road course. The cars are racing machines from the “Group 6” SVRA class. As in previous years that will include 1963 to 1972 vintage Corvettes, Camaros and Mustangs but also race officials are considering adding other Group 6 marques such as Porsche and Jaguar for variety. As in the previous three years, the professionals will be paired with amateur drivers, splitting stints at the wheel at their discretion.
AJ IV is a six-time starter in the Indianapolis 500 from 2003 to 2010. He holds the record as the youngest driver to start the classic at just 19. A versatile driver, he got his start as a nine-year-old in Junior Dragsters, winning two titles. After that experience he raced karts as a teenager. From there he began racing SCCA formula cars, taking the Southwest Regional Championship in 2001 and finishing third in the national championship. Those accomplishments earned him SCCA rookie-of-the-year. Also in 2001 he finished second in the feature event of the World Karting Association’s Dirt World Championships at Daytona.
After getting a taste of USAC Silver Crown racing he stepped up to grandfather A.J. Foyt’s Infiniti Pro Series team in 2002. That series was the equivalent of today’s Indy Lights and Foyt took four impressive wins to close out the season championship. The following year he raced for his grandfather in the Indianapolis 500. During his Indy car career he also raced for Vision Racing, securing that team’s best ever finish with a third place at Kentucky Speedway in 2007. Foyt also raced in NASCAR Busch (now Xfinity) and the 24 Hours of Daytona. He earned a third place finish for a podium perch in last year’s Indy Legends Pro-Am.
Like many of the professional drivers, Manning boasts a massively varied resume, starting in karting at age 10. By 18 he was racing Formula Vauxhall scoring two victories. He continued such success when he graduated to British Formula 3 with two wins including the support race for the 1998 British F1 Grand Prix, thus becoming the only driver to win that event twice. Moving to Japan in 1999 he captured that country’s Formula 3 championship.
These successes garnered him the attention of the Formula 1 paddock as he tested for Williams and was hired as test driver for BAR Honda F1 in 2000. By 2003 he was racing in Indy car with Walker Racing and then in 2004 he joined the Ganassi Racing. After a stint in A1 Grand Prix he returned to Indy car for a ride with the legendary A.J. Foyt. Manning competed in four Indianapolis 500s with a best placement of ninth in 2008. An accomplished sports car driver he led his team to a second-place finish in the 2007 24 Hours of Daytona.
In addition to the Pro-Am, there will be a festival of other activities at the Brickyard Invitational, the Hagerty Insurance “shine and show” car corral, a “Celebration of Motorcycles” with vintage motorcycle racing and displays, and 500+ vintage racers ranging over 100 years of automotive history racing in SVRA Groups 1 through 12. An oval exhibition featuring a racecar show of judged competition for the A.J. Watson and Sir Jack Brabham trophies led by track historian Donald Davidson will also take place. Also, for the first time ever, the professional Trans Am series will compete as the Sunday afternoon feature race. Heading the pack will be series champion Amy Ruman who has won the crown the last two years.