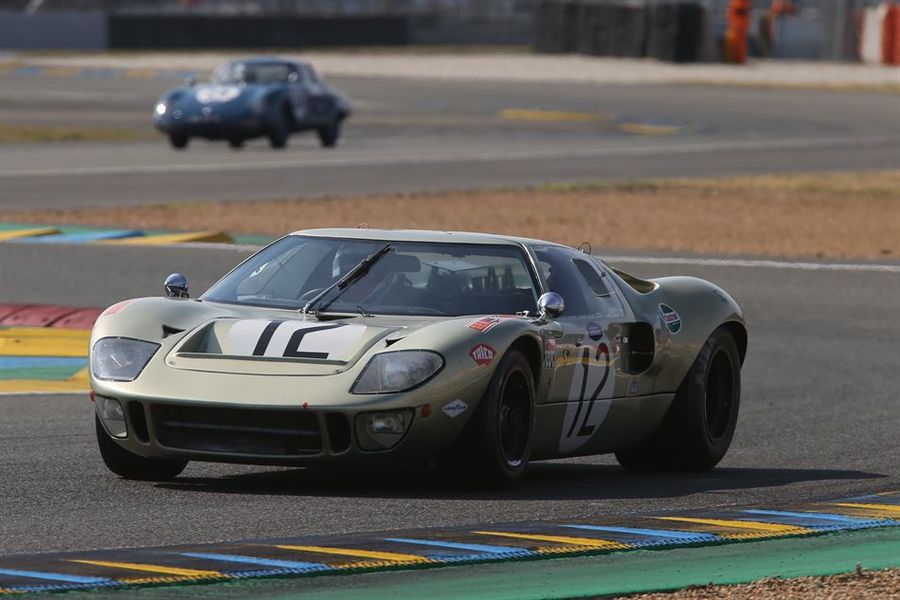 The sun shone down on the Le Mans Legends with a good crowd already at the circuit to enjoy the spectacle, and an exciting race with a level of attrition reminiscent of the period these cars came from sadly came to an end with the field behind a safety car, the GT30 of Bernard Thuner and Claude Nahum taking the win.

The two quick GT40s showed their pace at the start with Thuner heading Diogo Ferrao. The Alpine 220 stayed with them until the big Fords really stretched their legs on the straight, Andrew Smith in the number 63 GT40 looking to dive inside the Alpine at the first chicane but spinning in the attempt. The two at the front opened a gap, the Alpine in third and Smith on a charge working back up the order.

Amongst a swathe of early stoppers was the Lister Costin of Chris Ward which had started off on the fourth row, a flying pit visit seeing the JD Classics crew rectify a misfire. At the front Thuner was easing away from Ferrao, four seconds clear by lap three and the front-runners already amongst the back-markers in the multi-class race.

Weaving his way through the backmarkers on the run down to the first chicane Thuner was still clear of Ferraro, the number 14 GT40 of Marc Doncieux stopped at the side of the track after an earlier spin. Cars were already making their stops, the rules calling for a one minute pit stop regardless of whether a driver change was due or not, with some runners suffering in the heat while stationery.

The lead pair stopped on the same lap for their driver changes, Claude Nahum taking from Thuner, Ferrao handing over to the rapid Martin Stretton to take over, the number six GT40 stepping out of shape in the pitlane as Stretton powered away.. A sudden burst of pit visitors saw some teams scrabbling for a clear space to stop and make their change.

What looked to be an exciting chase at the front was soon over as Stretton pulled off in the number 6 GT40 early on his out lap, leaving Richard Meins, yet to stop, in the lead in his GT40, Nahum the leading stopper. The battle for second was where the attention now was, the gorgeous Shelby Cobra 289 MkII of Ludovic Caron holding off the Cobra Le Mans of David Hart with Jame Cottingham, now in the GT40 Smith spun early on, the three dicing through the traffic.

Shortly after the Aston Martin DP214 pitted when Stephen Archer, having just taken over from Robert Rowe, cracked the sump at the first chicane, the race was under a safety car as officials reacted to oil down on the circuit – some of it before the first chicane so not all Archer’s - and also took the chance to tidy up some of the cars stopped round the circuit. The Audi safety car, looking sadly out of place, picked up the leader, the second place battlers now just a handful of backmarkers behind the lead in the queue with just minutes of the race left, Cottingham now ahead of the pair of Cobras in second.

With the clock counting down the remaining minutes and the field still lined up behind the safety car, hope were high that we would get one more racing lap from the field, Cottingham in particular placed to gain positions quickly. The car arrived with time almost out and pulled off into the pitlane, only for the field to be greeted by the chequered flag as they exited the Ford chicane onto the pit straight, Nahum taking the flag in the 12 GT40. Caron nipped past Cottingham between the safety car pulling off and the flag, but as racing doesn’t restart unto they cross the line second was Cottingham’s.

“I spun at the first chicane just trying to go past the Alpine,” said Smith, who had recovered going in the first part of the race before handing over to Cottingham, “I don’t think we touched but the back of the car went light. We got back through the traffic, so great James brought the car home second.”